Tickets are required as capacity is limited and can be reserved by phone (479) 657-2335, online, or at Guest Services in the main lobby.

General Admission: A self-guided experience. To enter, present your ticket at the door of the house. General admission tickets are free. A free, self-guided audio tour of the house is available in both English and Spanish at the house entrance.

Guided Tours: These are one-hour, indoor and outdoor, small-group experiences led by specially trained volunteer tour guides. Guided tours meet in the museum’s south lobby 10 minutes before the start time. Guided tours are $10 + tax per person, or are free for museum members and youth ages 18 and under. Fees contribute to maintaining and preserving the house for generations to come.

Please Note: Photography is not permitted inside the house. You may, however, take photos of the exterior and grounds. Interior photos are shown below.

Explore the Bachman-Wilson House from your own home! Take a virtual tour of this masterpiece designed by Frank Lloyd Wright that allows for close inspection of nearly every square inch of the house, including the second floor which is normally closed off to visitors.

About the House: Usonian Architecture

Known as the Bachman-Wilson House, this structure is an example of Frank Lloyd Wright’s classic Usonian architecture. The word “Usonian” was derived from an abbreviation of “United States of North America.” Wright created this term to describe a distinctly American style of residential architecture he developed during the Great Depression to be within the reach of the average middle-class American family.

This house was originally built for Gloria and Abraham Wilson in 1956 along the Millstone River in New Jersey. It was subsequently purchased by architect/designer team Lawrence and Sharon Tarantino in 1988 and meticulously restored. When the house was threatened by repeated flooding at its original location, the Tarantinos determined that, in order to preserve it, they should sell the house to an institution willing to relocate it. After the Tarantinos conducted a multi-year search for a suitable institution, Crystal Bridges acquired the house in 2013. The entire structure was then taken apart and each component was labeled, packed, and moved to the museum, where it was reconstructed in 2015.

The museum partnered with the Fay Jones School of Architecture and Design at the University of Arkansas in the development of this Welcome Pavilion, which serves as an entryway to the site of the Frank Lloyd Wright house at Crystal Bridges. Students in the school’s Design and Fabrication program designed and built the structure and moved it to the museum grounds in 2014.

The pavilion features information on Frank Lloyd Wright, several of his buildings, and Usonian architecture in general, as well as the history of the Bachman-Wilson House itself.

Explore the influence of Frank Lloyd Wright on Fay Jones’s work as illustrated in the Bachman-Wilson House. The lives of these two notable architects – Arkansas native and award-winning architect Fay Jones (1921-2004) and his mentor Frank Lloyd Wright (1867-1959) – intersected for a 10-year time period, beginning in 1949 until Wright’s death in 1959.

This digital exhibit documents the development of these two notable architects’ affiliation, and includes nearly 150 photographs, plus primary source materials such as correspondence; lectures; musings and writings; and other media, including a video interview with Fay Jones’s wife Gus, created by the David and Barbara Pryor Center for Arkansas Oral and Visual History.

This exhibition was created through a collaboration between the Library at Crystal Bridges Museum of American Art and the University of Arkansas Libraries Special Collections. 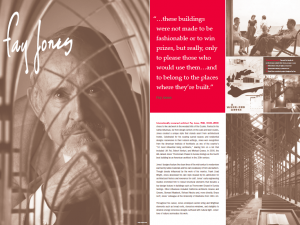 Download this brochure, courtesy of the University of Arkansas Fay Jones School of Architecture and Design, to locate Fay Jones projects in Northwest Arkansas.

Learn more in our blog

Students and faculty in the Fay Jones School of Architecture + Design honored Fay Jones and his mentor, Frank Lloyd Wright, by building a permanent structure on the grounds of…

The Welcome Pavilion is generously sponsored by the Bob Bogle Family and Greenwood Gearhart Inc.