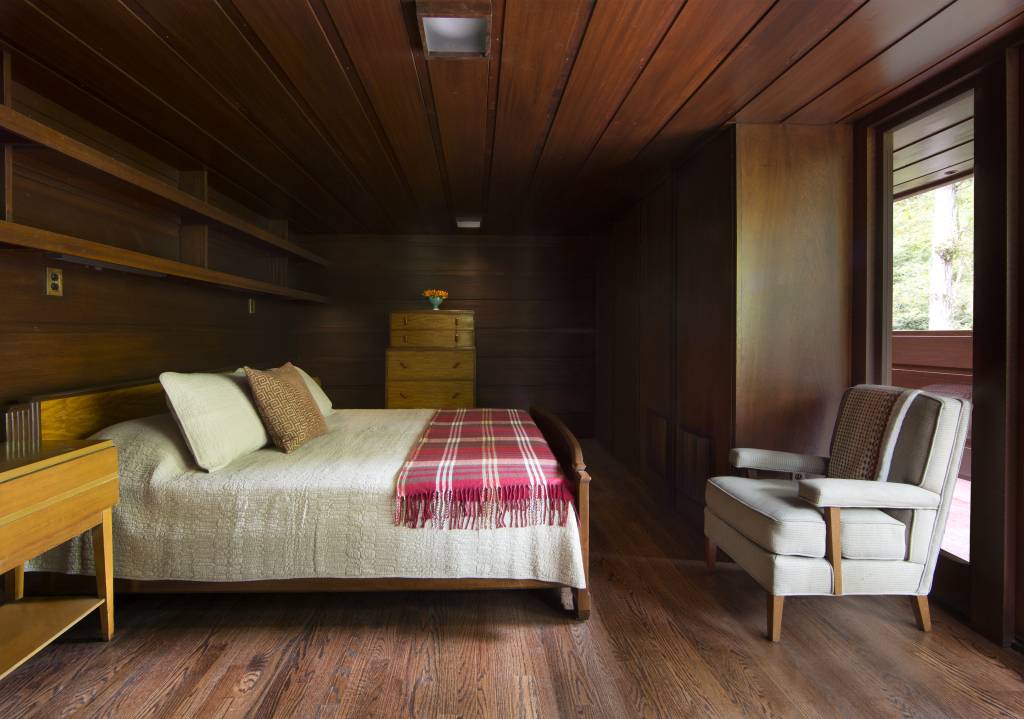 The back bedroom, considered the master bedroom.

American architect Frank Lloyd Wright was born on this day in 1867! To celebrate his 153rd birthday, we’re exploring the second floor of the Wright-designed Bachman-Wilson House, located on Crystal Bridges’ grounds.

The Bachman-Wilson House was originally built for Gloria Bachman and Abraham Wilson between 1953 and 1956 along the Millstone River in New Jersey. When frequent floods threatened the home’s survival, it was uprooted from its New Jersey home and reinstalled at Crystal Bridges in 2015. 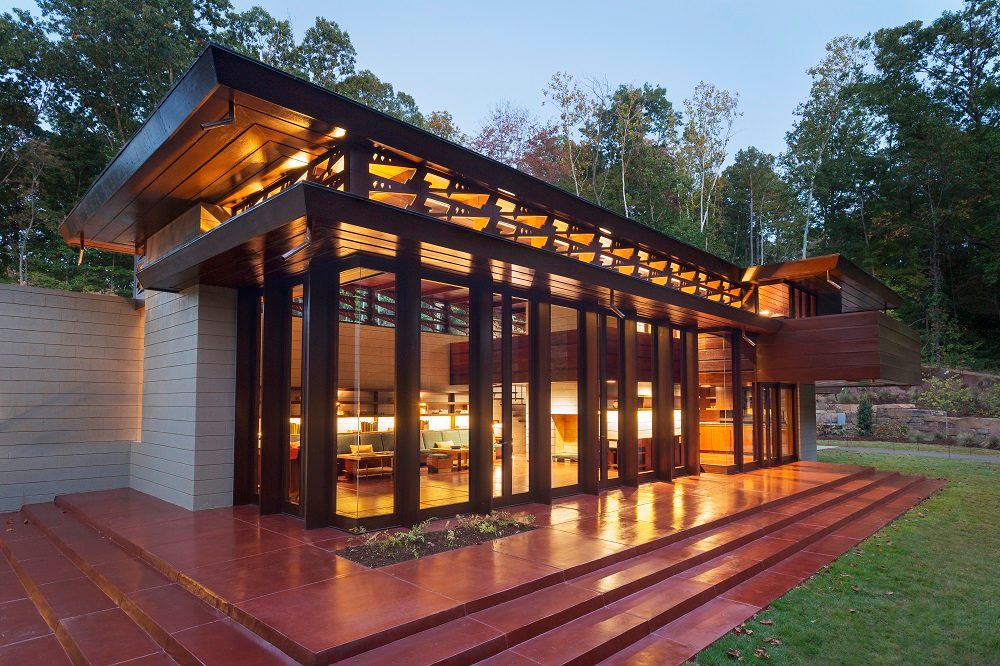 Ever since its reconstruction in Bentonville, visitors have been able to walk inside the classic Usonian house and explore the main living space. However, although beautiful in design, the stairs are not constructed to accommodate hundreds of visitors going up and down each week, so the second floor has remained closed off to the public. The front bedroom was designed to be Chana Wilson’s room, the daughter of Abe and Gloria Wilson. It features a built-in desk and shelving, similar to the built-in furniture on the first floor. It also includes a balcony that would have overlooked the house’s front lawn. 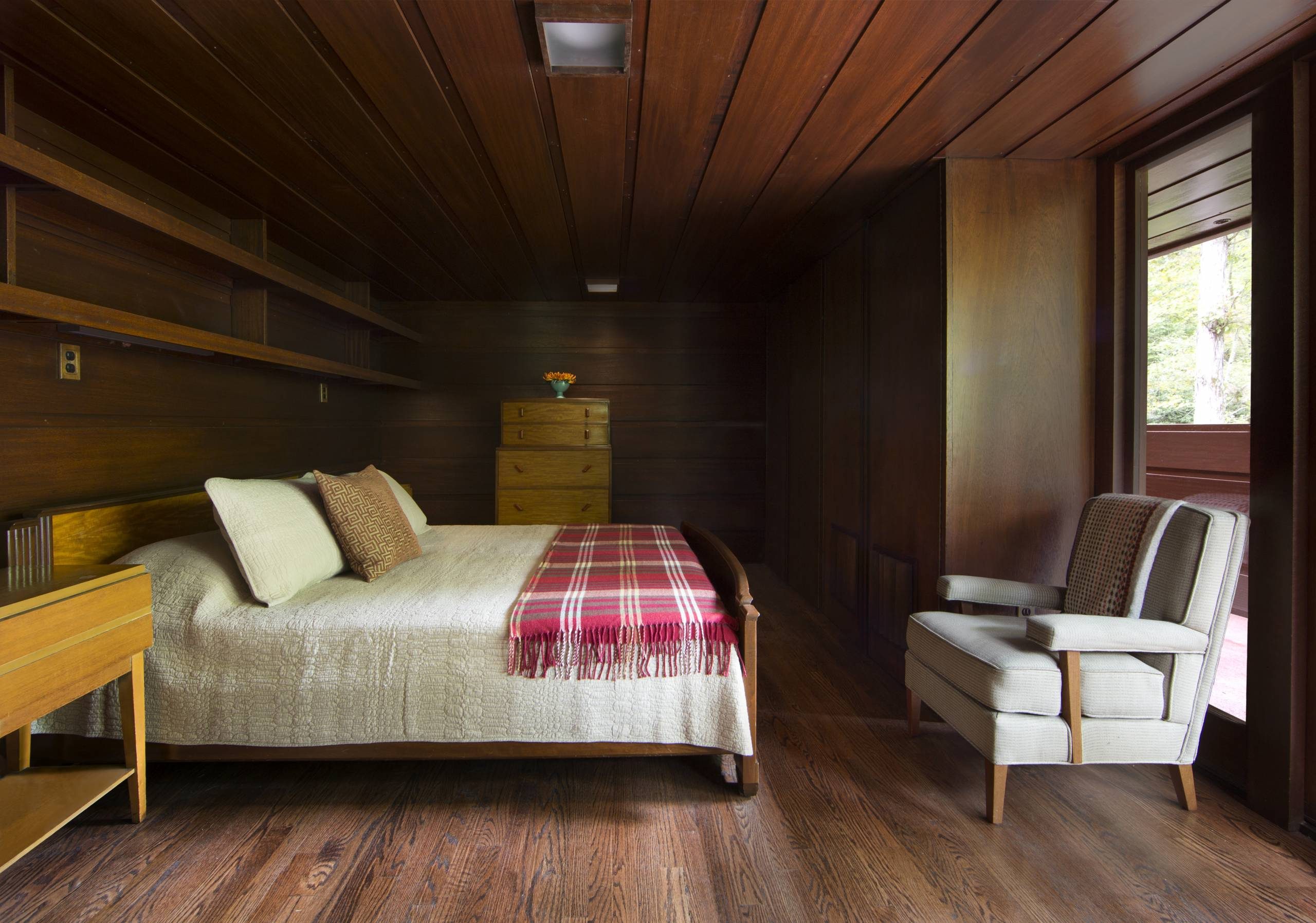 The back bedroom, considered the master bedroom.

The back bedroom was designed as the master bedroom for Abe and Gloria Wilson. The balcony connected to this room would have overlooked the backyard and New Jersey’s Millstone River.

While the first floor of the Bachman-Wilson House makes use of heated concrete floors, the upstairs is heated with radiators. The upstairs bathroom features a skylight.

The upstairs bathroom can be entered from two sides, from doors just outside of the bedroom doors. The Philippine mahogany used throughout the home is also used in the bathroom. Even the shower walls are composed of the water-resistant wood, while the bathroom floor is made out of cork.

The bathroom features a skylight that not only allows for a great source of natural light, but also could be opened along with the doors or windows downstairs to improve airflow through the house.

Take a virtual tour HERE and explore nearly every square inch of the house, including the second floor.