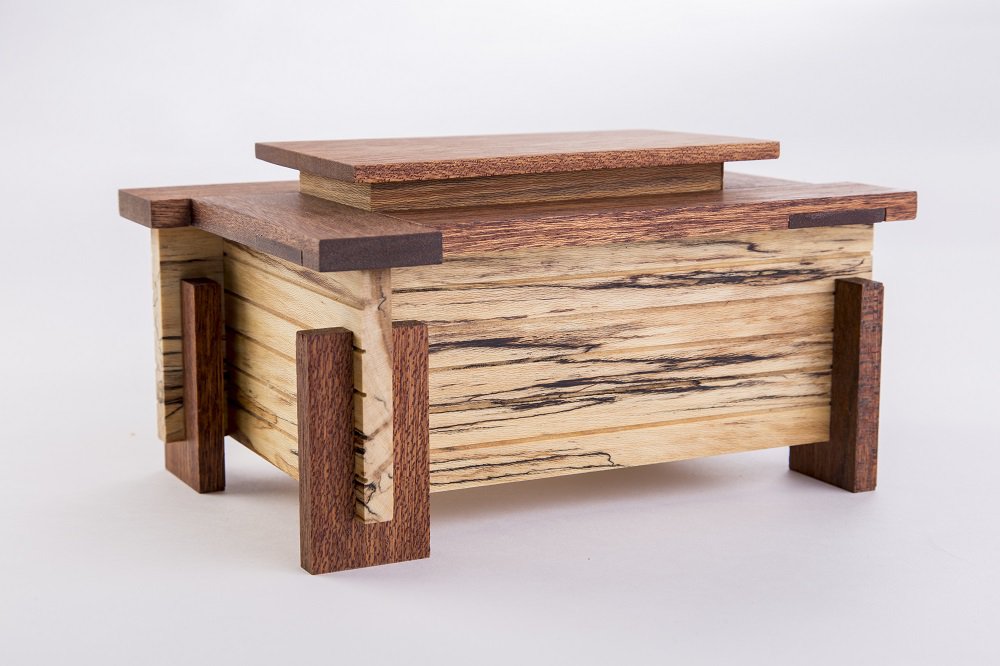 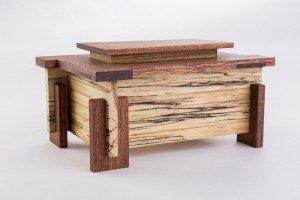 Woodcrafter and Crystal Bridges volunteer Myron Williams has created a limited number of beautiful wooden magazine racks and decorative boxes inspired by the Frank Lloyd Wright house that are now available for purchase in Crystal Bridges’ Museum Store.  The magazine rack, based on a classic Mission-style design, features the unique cut-out pattern found in the house’s clerestory windows; and the boxes are designed to mimic the house’s horizontal lines and stepped foundation. All are made by hand, primarily from sycamore wood that was harvested from the grounds during construction of the Museum.

Intrigued by these elegantly crafted works, I took a drive to Bella Vista to meet with Myron and learn more about him and his process. 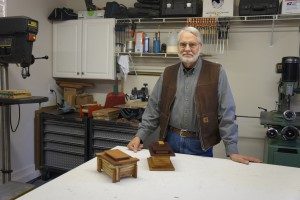 Crystal Bridges volunteer and woodcrafter Myron Williams in his workshop.

In addition to being a craftsman and volunteer, Myron is also an artist who creates landscapes in pastel. He is retired from his third (or maybe fourth) career.  His first was as a programmer for IBM and the US Space Program—where, he casually mentioned to me, he wrote programs for both the Gemini and Apollo missions. But he’d always been interested in woodworking, so in the mid-1970s he took up cabinetry, and then shifted to building furniture within about a year.

This bookcase and clock combination is a variation Myron Williams created on a classic Stickley design.

Myron soon became enamored of the clean lines and master craftsmanship of Mission style furniture, epitomized by the designs of Gustav Stickley. Stickley was himself inspired by the work of the English designer and artist William Morris, who famously stated: “have nothing in your house that you do not know to be useful or believe to be beautiful.”  Stickley’s furniture was hand-crafted to the highest standards and designed to be both beautiful and functional, with an emphasis on simplicity.

“I see it as a lifestyle,” Myron told me. “The whole purpose is to have a lifestyle that’s simplified. This seems to be a goal still worthy of pursuit today.” 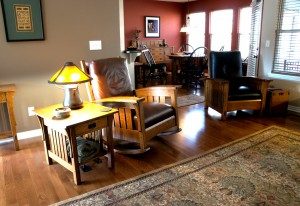 The home of Myron and Jan Williams is furnished with Myron’s handcrafted furniture.

His embrace of the “Mission” lifestyle is evident in the home where Myron lives with his wife Jan, who is also a Crystal Bridges volunteer. The house is fully furnished in Myron’s handmade Mission furniture which appears to me to be indistinguishable from the originals. His work compliments the original Stickley designs created in the 1930’s. There are no nails in his beautiful Mission chairs.  They are held together through precise joinery and wooden pins. 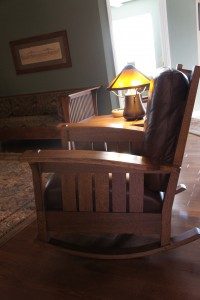 This Mission style rocking chair built by Williams contains no nails. In the background, an original Stickley sofa looks right at home.

Myron is no longer doing commissioned work, so when he became a volunteer at Crystal Bridges, he had hoped to put his woodworking experience to use, but hadn’t yet found the proper outlet.  Then, shortly after the Bachman-Wilson House went into construction earlier this year, he had an epiphany while on a Members Travel Program trip to Tulsa.

“I was on a garden tour with [Director of Facilities] Scott Eccleston,” he explained, “and Scott mentioned all the wood in storage. I got to thinking about building items that fit with the house.” 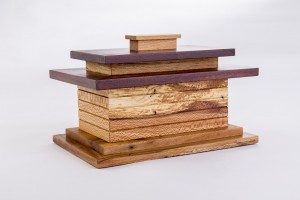 He designed a small rectangular box that mimics the shape of the house. “I came as close as I could to the Bachman-Wilson House’s horizontal lines,” Myron said. “I also used the steps at the back of the house and a similar roof shape for the top.” Each of the boxes includes only four screws: to hold the body of the box onto the base. All the other pieces are held together through intricate joint work.

After talking with Scott Eccleston about his project, Myron was able to include an additional special touch to some of the boxes by incorporating pieces of the actual Philippine mahogany used in the Bachman-Wilson House. 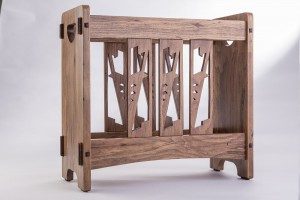 Magazine rack by Myron Williams, featuring details based on the clerestory windows found in the Bachman-Wilson House at Crystal Bridges. Photo by Dero Sanford.

Although every effort was made during reconstruction of the house to use all original materials, there were a few instances in which sections of the original mahogany planks had been too damaged by floods to be usable. These were replaced with modern mahogany boards, and what could be salvaged of the original wood was stored. These two- to three-foot planks were of no use for construction of frames or furniture, but they were the perfect size to serve as material to build lids for some of the boxes.

I encourage you to come see these lovely keepsakes for yourself.  They were built, like the Bachman-Wilson House itself, with a commitment to craftsmanship and a reverence for the history and principles behind the work.