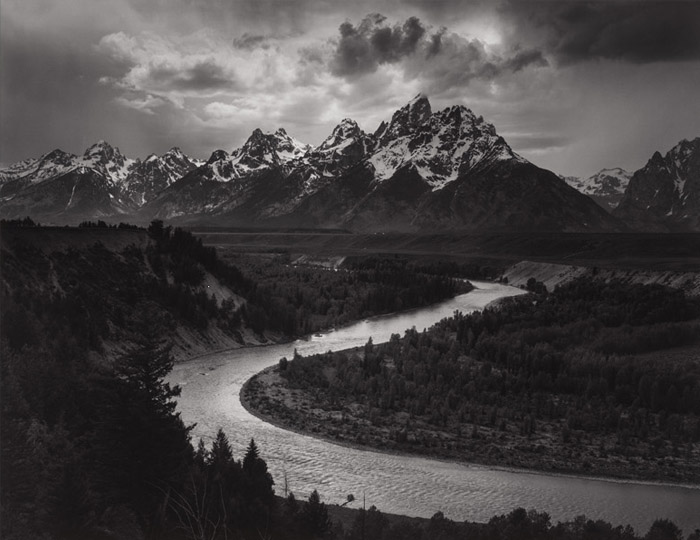 Crystal Bridges Museum of American Art announces Ansel Adams in Our Time will be on view September 19, 2020 through January 3, 2021. Tickets are available here for $12, and admission is free for members, veterans, and youth ages 18 and under.

Ansel Adams’ (1902-1984) photographs of the western United States helped define a twentieth-century vision of the American landscape. He pushed the boundaries of fine art photography, employing abstraction, direct exposure, and innovative printing techniques to create vibrant, detailed, and highly-contrasting images. Ansel Adams’ photographs of the United States are iconic, particularly sites such as Yosemite and Yellowstone national parks, The Sierra Nevada, the Southwest, and more.

“Though Adams’ career spanned much of the twentieth century, this exhibition looks at his work through a contemporary lens,” said Alejo Benedetti, associate curator, contemporary art at Crystal Bridges. “Here Adams’ seemingly timeless images are considered as both a product of their time, but also as objects with continued relevance today. This exhibition helps us understand Adams’ legacy, the artists who preceded and followed him, and how his concerns and advocacy continue to resonate in the face of an ever-changing American landscape.”

Ansel Adams in Our Time features more than 100 of Adams’ works displayed alongside nineteenth-century photographers such as Eadweard Muybridge and Carleton Watkins, and roughly 80 works by 24 of Adams’ contemporary successors such as: Mark Klett, Trevor Paglen, Catherine Opie, Will Wilson, Victoria Sambunaris, Binh Danh, and Abelardo Morell, whose work was recently acquired by Crystal Bridges. Among the objects in the exhibition, Ansel Adams remains the backbone, with the inclusion of his predecessors and successors to help set his practice into perspective.

Among his most recognizable photographs of national parks, the conversations in 2020 both echo and diverge from Adams. For many Americans, national parks still embody an Adams-esque retreat from the everyday. However, the artworks shine a light on social issues and encourage questions about who feels comfortable escaping to national parks and the responsibility of protecting the land. Contemporary photographers like Binh Danh and Abelardo Morell broach topics of belonging and land claims with reverence for Adams and with a critical eye toward the now.

Abelardo Morell was born in Cuba, and moved to the United States at 13. In Cuba there was a particular admiration for Westerns, and from an early age, Morell watched John Wayne and other stars of Hollywood’s take on the American West. Years later, after becoming a photographer and heading west to photograph the iconic views captured by Ansel Adams, Morell began experimenting with ways to disrupt the familiar views of national parks by turning his camera onto the mundane.

What emerged were Morell’s Tent Camera photographs. Using the basic principles of a camera obscura, Morell sets up a tent in view of his desired vista. The image then appears directly on the ground and he snaps a digital photograph of this projected image. This disruption is perfectly illustrated in the two acquisitions: Tent-Camera Image on Ground: View of Mount Moran and the Snake River from Oxbow Bend, Grand Teton National Park Wyoming (a larger version of this acquisition will be featured in the exhibition) and Tent-Camera Image on Ground: View of Rio Grande and Mexico Near Boquillas Canyon, Big Bend National Park, Texas.

The grand views of the mountains and winding rivers in these photographs compete with blades of grass and dirt. In this way, Morell is able to unite the mundane with the grand in an image where both components are equally interesting. [Morell is one of the 24 contemporary artists in Ansel Adams in Our Time. Though the work in the show represents the same visual, the museum acquired a different print edition.]

Ansel Adams in Our Time was organized by Museum of Fine Arts, Boston and is divided into seven thematic sections based on the places and themes Adams shot throughout his career, paired with photographs by other artists:

The opening week of Ansel Adams in Our Time includes a digital opening exhibition lecture and member preview. Exhibition programs include: