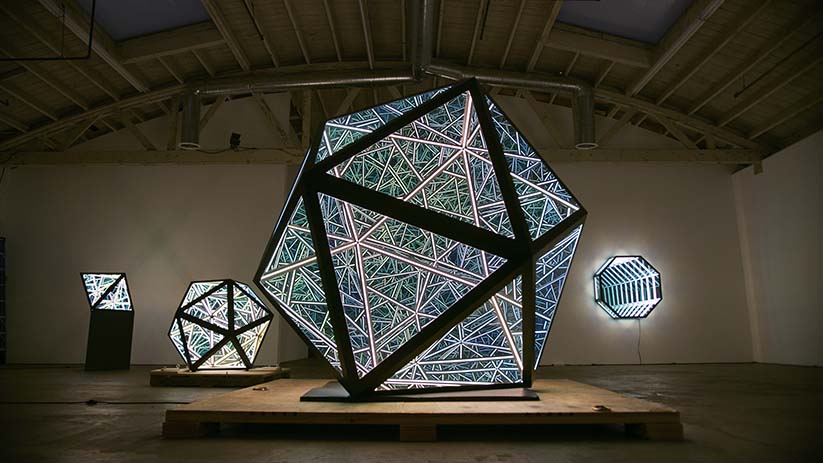 Crystal Bridges Museum of American Art presents the debut of Crystals in Art: Ancient to Today on view October 12, 2019 to January 6, 2020. Tickets are available here for $12, and general admission is free for members, veterans, and youth ages 18 and under.

Crystals in Art features 75 objects, including artworks, artifacts, and 10 crystal specimens  that explore how crystals have captured the human imagination across time, place, and culture, and draw on the links between art, religion, science, and social status. The exhibition presents a wide variety of media from sculpture, photography, etching, drawing, video, mixed-media, and crystals asearly tools, ritual objects, jewelry, decorative items, and more. Artworks featured in the exhibition are on loan from museum collections nationwide including the Metropolitan Museum of Art in New York, the Smithsonian National Museum of Natural History in Washington, DC, the Philadelphia Museum of Art, J. Paul Getty Museum in Malibu, CA, the Andy Warhol Museum in Pittsburgh, among others, and private collections.

Crystals in Art features objects from a 5,000-year period that span the world– from ancient Egyptian figurines, to an engraved rock crystal from first-century Rome, a pendant of a rosary from sixteenth-century Mexico, into modern times with Andy Warhol’s screen prints from the 1970s, a  2015 life-sized crystal chandelier by Chinese artist and activist Ai Weiwei, among others.Contemporary artists included in the exhibition, Olafur Eliasson, Marina Abramović, Jen DeNike, Marilyn Minter, Albrecht Dürer, Cindy Sherman, Judy Chicago, Alexis Arnold, Tacita Dean, Carter Mull, Daniel Arsham, Anthony James, Eric Hilton, and Miya Ando, reveal the persistent allure of the medium of crystal for art making. Visitors will also encounter 10 crystal specimens including a monumental quartz crystal named The Holy Grail. Mined in 1931 in west central Arkansas, an area renowned for producing some of the largest and clearest quartz crystals in the world, The Holy Grail is the largest crystal cluster ever mined in Arkansas.

Crystal Bridges also partnered with the University of Arkansas and Dr. Tom Paradise, professor of geosciences at the J. William Fulbright College of Arts and Sciences, to lend his expertise on the geology of crystals. Dr Paradise will be leading a free Discover the Grounds event on Saturday, November 9, where he will discuss the geological formations that set Arkansas apart from other regions of the United States, and lead a walk to our large installation of crystals from Blue Springs, Arkansas.

“Crystals have captivated the human imagination since the beginning of time,” said Rod Bigelow, executive director and chief diversity & inclusion officer at Crystal Bridges. “In Crystals in Art, we expand our focus on American art to explore the full impact of crystal on monarchs, religious leaders, and artists. This exhibition is distinctive for the museum because Arkansas is the only place in North America where high-quality quartz crystal is mined. This exhibition gives us an opportunity to shine a light on the natural state.”

Crystals in Art: Ancient to Today was organized by Crystal Bridges Museum of American Art; co-curated by Lauren Haynes, curator, contemporary art at Crystal Bridges and curator of visual arts at the Momentary, and Joachim Pissarro, Bershad Professor of Art History at Hunter College and Director of the Hunter College Galleries, CUNY/City University of New York.

“This exhibition serves to investigate the surprising role of crystals in the arts through the ages,” said Haynes. “We have an opportunity to expand on the dialogue around the relationship between crystals and art and offer new insights.”

“As we began research at Crystal Bridges for this exhibition, we discovered endless numbers of possibilities, working through a wealth of crystal artifacts and artworks from around the world,” said Pissarro. “However, the wide span of crystals in art featured in this exhibition is really a testimony to the rise and fall of empires under which these artifacts were created, and one could even say that the continuous fascination with crystal serves as a common denominator between different cultural, ethnic, and religious groups.”

The exhibition is organized into five sections, each one focusing on a different aspect of crystal and how it has been perceived by various societies across humanity’s timeline:

Highlighted Artists in Crystals in Art:

Albrecht Dürer (1471 – 1528) was a painter and printmaker of the German Renaissance. While he experimented with many art mediums and subjects throughout his life, his work with engravings in the 1510s led him to create Melencolia I (1514), displayed in the Science and Mysticism section. In the engraving, a laurel-crowned angel sits dejectedly in the foreground, holding a measuring device and surrounded by woodworking tools while the sands of time pass through an hourglass. Featured prominently in the left center of the image is a crystalline structure that divides the foreground and background of the composition and forms an interruptive barrier.

Since the beginning of her career in Belgrade during the early 1970s, artist Marina Abramović has pioneered performance as a visual art form and has included crystal in many of her artworks. Abramović will have two works featured in the exhibition: Dozing Consciousness (1997) and Self Portrait with Quartz Crystal (2018), which can both be found in the Sacred and Transcendent section. In Dozing Consciousness, the provocative still of a women’s lips in a bed of crystals is actually part of a seven-minute video of the woman’s face fully emerging from the crystals around her. The clinking noises of the crystals moving around her create a soothing sound. Abramović will be coming to Crystal Bridges for a Distinguished Speaker lecture on Wednesday, October 30. Tickets are available here.

In her Crystallized Books series, a couple of which can be found in the Crystallized subsection, Alexis Arnold addresses “the materiality of the book versus the text or content of the book, in addition to commenting on the vulnerability of the printed book.” According to her, “the books, frozen with crystal growth, have become artifacts or geologic specimens imbued with the history of time, use, and memory. The series came about after Arnold repeatedly found boxes of discarded books in her neighborhood. Instead of leaving the books, she reimagined them as sculptural objects. Arnold will lead an Adult Workshop at Crystal Bridges on Sunday, November 10. Tickets are available here.

Opening Week and Programming
The opening week includes the Crystals in Art member preview and opening lecture on Friday, October 11 featuring co-curator Joachim Pissarro and artists Marilyn Minter and Miya Ando. Throughout the duration of the exhibition, Crystal Bridges is offering a full roster of programs inspired by the show with several classes that feature Crystals in Art artists as the instructors. The exhibition programs include: