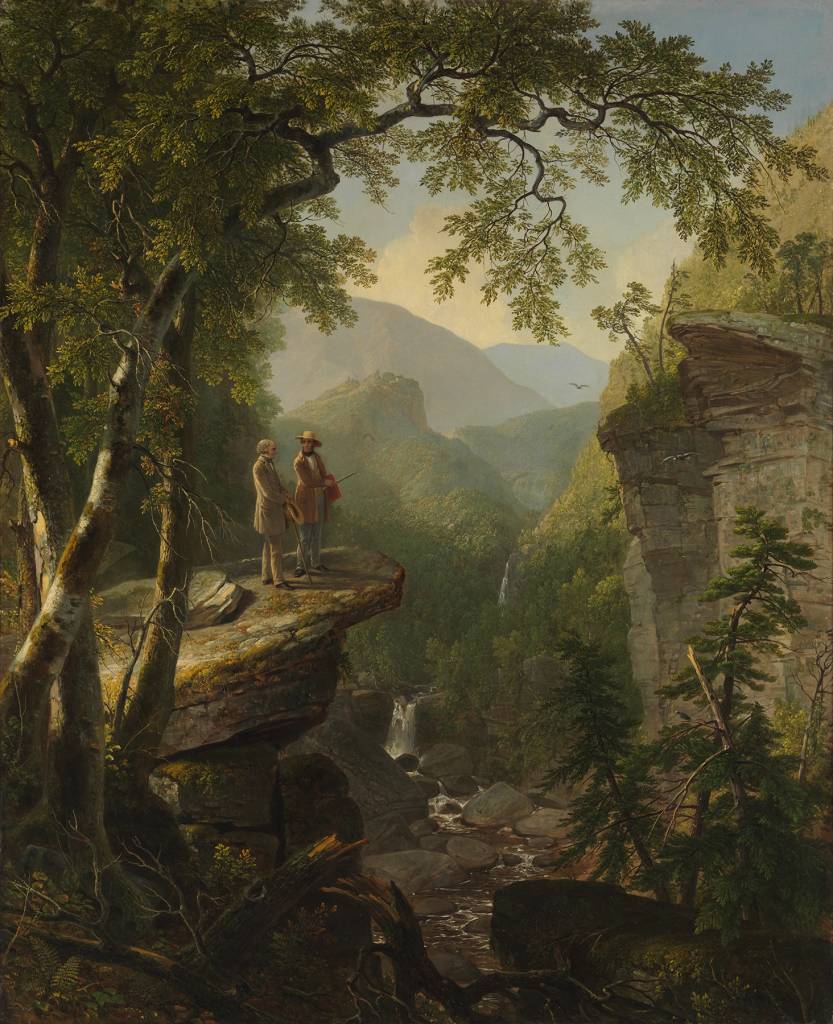 April is National Poetry Month!  In celebration, let me introduce you to a few works in Crystal Bridges’ collection with poetic connections.

The two figures in this artwork, by Asher B. Durand (above) are the artist Thomas Cole and the poet and author William Cullen Bryant.  They were the best of pals, as well as friends of Durand himself. The work was commissioned by arts patron Jonathan Sturges as a gift to Bryant upon Cole’s death in 1848.

The title comes from a poem by John Keats:

O Solitude! if I must with thee dwell,
Let it not be among the jumbled heap
Of murky buildings; climb with me the steep,—
Nature’s observatory – whence the dell,
Its flowery slopes, its river’s crystal swell,
May seem a span; let me thy vigils keep
’Mongst boughs pavillion’d, where the deer’s swift leap
Startles the wild bee from the fox-glove bell.
But though I’ll gladly trace these scenes with thee,
Yet the sweet converse of an innocent mind,
Whose words are images of thoughts refin’d,
Is my soul’s pleasure; and it sure must be
Almost the highest bliss of human-kind,
When to thy haunts two kindred spirits flee.

You can read more about this work in an earlier blog post here.

When Dickinson Shut Her Eyes No. 859: A Doubt If It Be Us 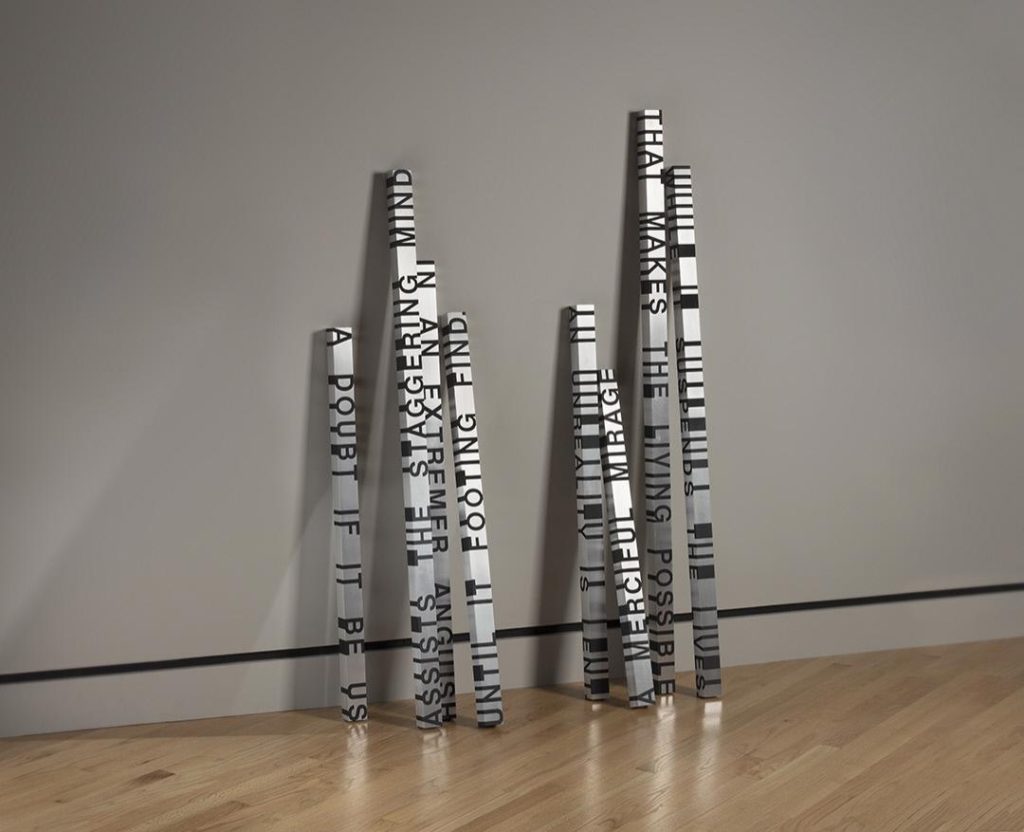 When Dickinson Shut Her Eyes No. 859: A Doubt If It Be Us, 1993
Roni Horn, b. 1955
Solid cast plastic and aluminum
Crystal Bridges Museum of American Art, Bentonville, Arkansas

Made of solid cast plastic and aluminum, each of these eight elements bears a line from Dickinson’s poem  A Doubt If It Be Us

A Doubt If It Be Us
Assists the staggering Mind
In an extremer Anguish
Until it footing find.

An Unreality is lent,
A merciful Mirage
That makes the living possible
While it suspends the lives.

In this work, Roni Horn translates Emily Dickinson’s poem through the materials favored by Minimalist artists, many of whom have been male. The sculpture reflects the poem’s structure: each unit’s length is determined by the corresponding line length in the poem. Horn combines the irregular rhythms of Dickinson, a prominent nineteenth-century American poet, with the strict formal approach of Donald Judd. The resulting artwork remixes what have been considered male artistic modes with a female poetic voice.

The Falcon Cannot Hear the Falconer 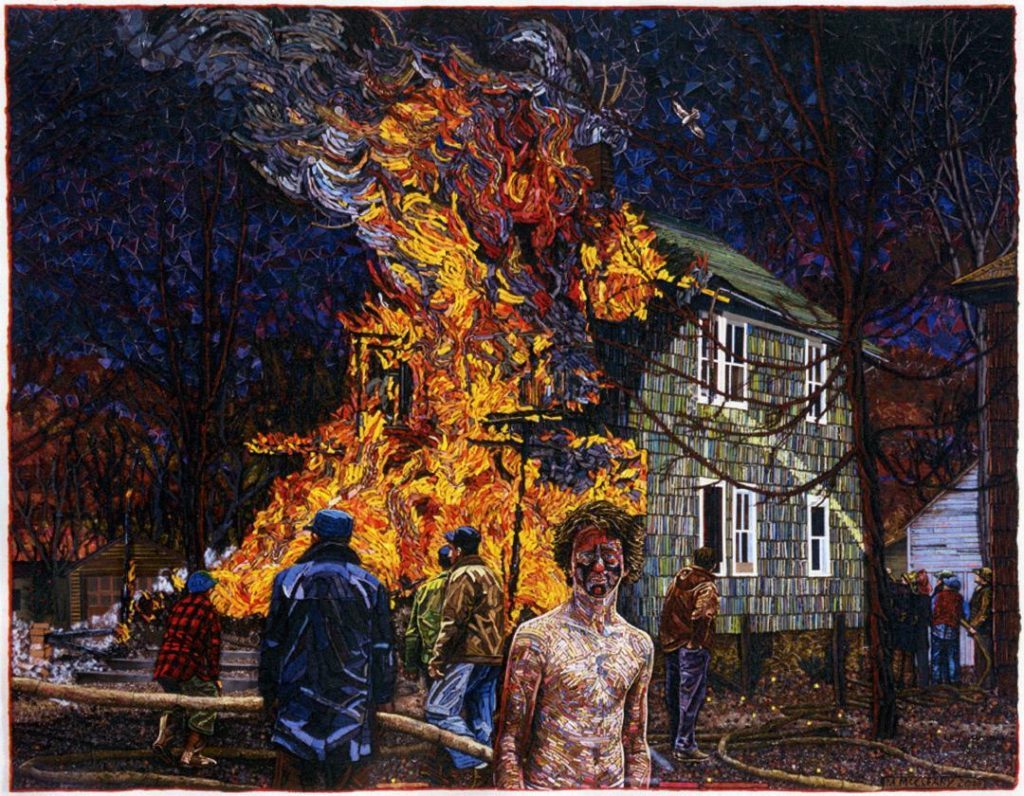 Amazingly, this entire artwork is created of bits of rolled and twisted paper, twigs, string, and other materials, affixed to a paper surface.  The title is derived from a poem by William Butler Yeats, “The Second Coming,” written in 1919.

Turning and turning in the widening gyre
The falcon cannot hear the falconer;
Things fall apart; the centre cannot hold;
Mere anarchy is loosed upon the world,
The blood-dimmed tide is loosed, and everywhere
The ceremony of innocence is drowned;
The best lack all conviction, while the worst
Are full of passionate intensity.

Surely some revelation is at hand;
Surely the Second Coming is at hand.
The Second Coming! Hardly are those words out
When a vast image out of Spiritus Mundi |
Troubles my sight: somewhere in sands of the desert
A shape with lion body and the head of a man,
A gaze blank and pitiless as the sun,
Is moving its slow thighs, while all about it
Reel shadows of the indignant desert birds.
The darkness drops again; but now I know
That twenty centuries of stony sleep
Were vexed to nightmare by a rocking cradle,
And what rough beast, its hour come round at last,
Slouches towards Bethlehem to be born?

Yeats used religious symbolism in his poem to express his anguish over the impact of the First World War on Western civilization.  Loss and distress can also be seen in the face of the young man in the foreground who stares outward toward the viewer, who seems to serve as a kind of “witness.”  The artificial tree at the left, flecks of glitter, and other ornament-like materials and colors recall a tragic but all too commonplace occurrence during the holiday season; a fire set through human inattention or carelessness.  Are these, then, the incipient causes for both individual and collective devastation, as in Yeats’ nightmarish vision and McCleary’s heartrending tragedy?

Although titled Landscape, Mark Tansey’s painting has little to do with nature. Tansey uses artistic conventions of landscape, such as a horizon line and receding space, but the scene is fantastical and imaginative. A mountain of crumbled figures dominates the center of the canvas, representing dismantled sculptures of prominent figures from history.

I met a traveller from an antique land,
Who said—“Two vast and trunkless legs of stone Stand in the desert. . . . Near them, on the sand,
Half sunk a shattered visage lies, whose frown,
And wrinkled lip, and sneer of cold command,
Tell that its sculptor well those passions read
Which yet survive, stamped on these lifeless things,
The hand that mocked them, and the heart that fed;
And on the pedestal, these words appear:
My name is Ozymandias, King of Kings;
Look on my Works, ye Mighty, and despair!
Nothing beside remains. Round the decay
Of that colossal Wreck, boundless and bare,
The lone and level sands stretch far away.

The message of Tansey’s painting is contradictory—leaders’ legacies are preserved through art, but whose legacies will escape the dustbin of history? The image alludes to contemporary mass media, in which bits and pieces of information break loose of their historical grounding and freely combine into new configurations. 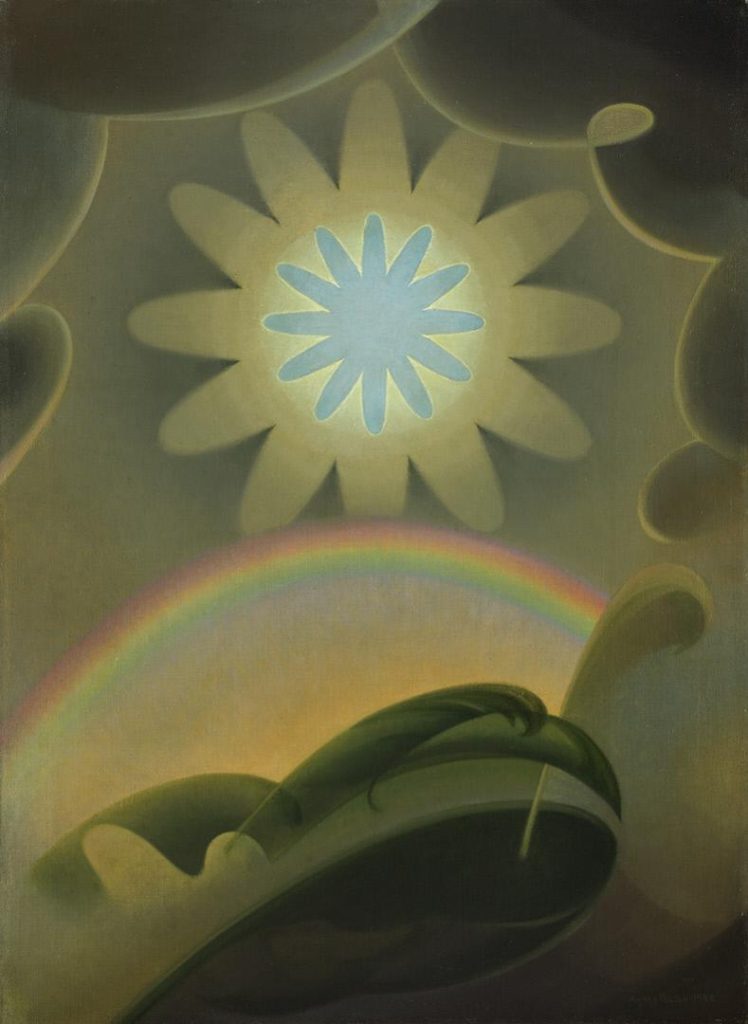 Much like her more famous contemporary, Georgia O’Keeffe, Agnes Pelton found great inspiration in the natural world. She not only painted beautiful and mysterious abstractions of landscapes and flowers, she imbued them with personal spiritual meaning.

In the mid-1930s, Pelton became a founding member of a group of artists based in Taos, New Mexico, known as the Transcendental Painting Group (TPG). The TPG manifesto stated that their purpose was “to carry painting beyond the appearance of the physical world, through new concepts of space, color, light and design, to imaginative realms that are idealistic and spiritual.”

Pelton wrote a poem to accompany the painting:

Dense clouds that push and loom
Too early, darkening the day.

Above the streaming palms
Bent low to earth
Sharp points of blowing sand converge
Are poised beneath the sky’s light blue
In balanced conformation.

Below this flowering, remote, serene
Behold the movement luminous –
A rainbow in the dust.