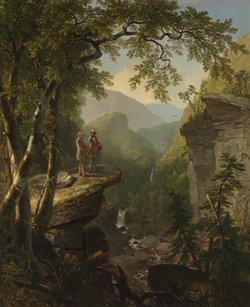 Durand was among the co-founders of the New York Drawing Association (later the National Academy of Design), and served as president of the institution for 16 years, beginning in 1845. When Cole died, the association asked William Cullen Bryant, another close friend of Cole’s, to deliver a memorial address in his honor.  Arts patron Jonathan Sturges then commissioned Durand to create a painting memorializing the two men’s friendship as a gift for Bryant. The work also references Durand and Cole’s own friendship:  the recorder Cole holds is a nod to the two artists’ mutual love of music—Durand referred to their friendship as “‘C major’—D flat” (Ferber, 2008).

After the passing of Thomas Cole, Durand was left the undisputed leader of American landscape painting. Kindred Spirits is not only his tribute to his dear departed friend and colleague, it is also a testament to Durand’s own mastery of the genre, as well as his expertise in painting portraits and figures. The painting also marks a turning point in Durand’s career.  As the art world moved increasingly toward realistic landscape, the composed landscape—imaginary landscapes composed by the artist for maximum impact—fell out of favor. Durand began to focus his skill on depicting geological formations and plants in rich, realistic detail, and rarely created composed scenes.

“After Durand painted Kindred Spirits, he published some of his new ideas in his “Letters on Landscape Painting” in the Crayon Magazine in 1855,” said Well-Off-Man. “In these letters, Durand urged American artists to develop their own style and paint outdoors, directly from nature, instead of working in the studio with ‘manipulated’ (composed) sketches and copying European painters, who incorporated allegories in their landscapes.”

O solitude! if I must with thee dwell, Let it not be among the jumbled heap Of murky buildings; climb with me the steep,- Nature’s observatory – whence the dell, Its flowery slopes, its river’s crystal swell, May seem a span; let me thy vigils keep ’Mongst boughs pavillion’d, where the deer’s swift leap Startles the wild bee from the fox-glove bell. But though I’ll gladly trace these scenes with thee, Yet the sweet converse of an innocent mind, Whose words are images of thoughts refin’d, Is my soul’s pleasure; and it sure must be Almost the highest bliss of human-kind, When to thy haunts two kindred spirits flee. —John Keats

Note:  Much of the information for this post was gleaned from Linda Ferber’s essay in Kindred Spirits: Asher B. Durand and the American Landscape, published by the Brooklyn Museum. The book also includes the full text of Durand’s “Letters on Landscape Painting.” This book, and other materials on the life and work of Durand, Cole, and the other Hudson River School artists, is available in the Crystal Bridges Library.