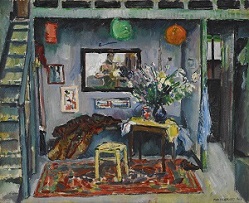 On March 15, 2014 Crystal Bridges will open an exciting new exhibition titled The William S. Paley Collection: A Taste for Modernism. William S. Paley (1901-1990), the founder and chairman of the Columbia Broadcasting Systems (CBS) collected more than 80 works of international modern art; 62 of these artworks will be exhibited at Crystal Bridges. Among the highlights of the exhibition are Paul Cézanne’s landscape painting L’Estaque (1879-83), André Derain’s Bridge over the Riou (1906), Paul Gauguin’s The Seed of the Areoi (1892), Henri Matisse’s Odalisque with a Tambourine (1925-26), and Pablo Picasso’s Boy Leading a Horse (1905-06). Paley had served as a trustee at the Museum of Modern Art and later as president (1968-1972) and chairman (1972-1985), and his collection was donated by the William S. Paley Foundation to MoMA in 1990, making it one of the most important donations of a private art collection to a public institution.

The Paley exhibition is a unique opportunity to present Crystal Bridge’s American Modernist art in a new context. For the first time the Museum will be able to exhibit works by early twentieth-century American artists from the Crystal Bridges collection and European avant-garde art that influenced these artists, in two adjacent exhibitions: The European Connection features Crystal Bridges’ American Modernists and will be housed in a gallery adjacent to the Paley exhibition. Almost all of Crystal Bridges’ modern painters and sculptors—including Alfred Maurer, Max Weber, Marsden Hartley, Lyonel Feininger, and John Bradley Storrs—traveled to Europe to experience the newest art trends and to perfect their artistic skills. Most of the early twentieth-century avant-garde art movements, including Post-Impressionism, Fauvism, Cubism, Dada and Surrealism, were developed in Paris, and American artists felt the urge to visit the European art capital, its galleries, salons, artist studios, and art schools to be considered serious artists. The Paley exhibition’s magnificent artworks will enable museum guests to explore these connections and relationships between European and American artists.

I will focus on some of these connections in the next few posts. 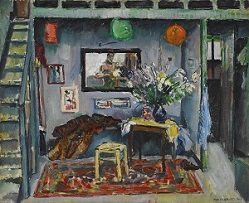 One of the Crystal Bridges artists who immersed himself into European avant-garde art is Max Weber. He organized classes with Henri Matisse for himself and fellow American art students. Weber adopted from his famous teacher the rugged contours, expressive application of vivid colors and abstract flattening of space typical for Fauvism. Also inspired by Matisse is the use of color to express dynamic relationships between forms, which is evident in the Japanese lanterns, table cloth, oriental carpet, and the stairs of My Studio in Paris (1907). The painting’s and sketchy, directional brushwork was likely influenced by Paul Cézanne’s. 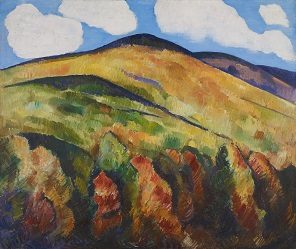 Marsden Hartley is another artist who was inspired by Cézanne’s technique of creating volume through small patches of graduated colors rendered in short paint-loaded brushstrokes, as one can see in his landscape Mountains No. 22. Hartley painted this White Mountains, New Hampshire scene shortly after he returned from Southern France were he painted a similar series of landscapes. Not everybody reacted positive about these European influences. In fact, Hartley’s New York art dealer and supporter Alfred Stieglitz was upset about Hartley’s interpretations of Cézanne’s style. He believed that in order to develop a true American Modernism artists need to ignore European influences and focus on personal experiences and the native environment. 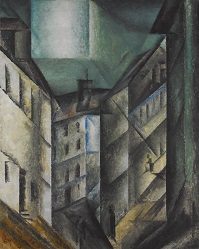 American born Lyonel Feininger spent fifty years of his life in Germany, became an influential Bauhaus teacher and frequently visited Paris during the early 1900s. His 1915 cityscape Schlossgasse (1915) depicts the castle alley in Weimar in a cubist painting style. The houses are painted in precise, sharply defined, geometrical forms with extremely flattened space and compressed interstices. The viewer simultaneously sees the houses from different angles and perspectives. Through the overlapping of sensitively shaded planes Feininger creates prism-like forms and an illusion of volume.

Read part two and part three of this post.