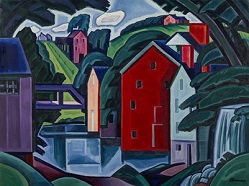 This is the second in a series of posts related to The European Connection, an exhibition of American modern artists from Crystal Bridges’ collection that will be on view concurrently with the upcoming exhibition of European Modernists:  The William S. Paley Collection: A Taste for Modernism.  You can also read the first post and last post in the series. Some of the artists in The European Connection were actually born in Europe before they immigrated to America and explored leading art movements in different European countries: Oscar Bluemner shared with German Expressionists such as Karl Schmitt-Rotluff an interest in the formal, emotional, and spiritual qualities of color. After his return to the United States he developed a distinctive style composed of geometric reduction of architectonic forms and simplified landscape motifs. Italian born Joseph Stella, who was mainly known for his Futurist works, was inspired by Neapolitan folk art, and exotic flora and fauna from North Africa, Barbados, and the Bronx Botanical Gardens when he painted Red Flower (1929).

A few American artists combined the European art inspirations with other ideas and influences and established new American Modernist movements such as Stanton Macdonald-Wright’s Synchromism, which is based on color scales that were made in ways analogous to musical scales. The idea that music and color are parallel phenomena was also explored by Robert and Sonia Delaunay, artists of the French Orphism movement. Members of the Stieglitz circle including Arthur Dove, Marsden Hartley and John Marin transformed various European art influences early in their careers and later tried to develop a pure American Modernism based on abstractions from nature and experiences made in their home country. 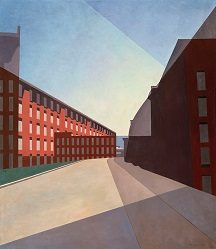 Charles Sheeler, Ralston Crawford and other artists, who were inspired by Cubism and photography, helped establishing Precisionism, portraying uniquely American industrial and urban landscapes. As a result American Modernism developed a variety of trends based on these artists’ creative experiments and interests.

Both exhibitions, The William S. Paley Collection: A Taste for Modernism and The European Connection present several of the many art movements that existed parallel to each other between 1900 and 1940. The European and American Modernists had in common that they disapproved of the strict rules and traditions taught at the academies. They felt Realism and Naturalism was outdated and not appropriate anymore to interpret an increasing complex and changing world due to new scientific research, technological inventions and social issues. Instead of representational images of heroes from history and mythology, artist wanted to create art based on their own views of the present.

The layout of both exhibitions offers the rare opportunity to experience the rich cultural exchange between artists of both continents, and to view works by artists that helped shape American Modernism.