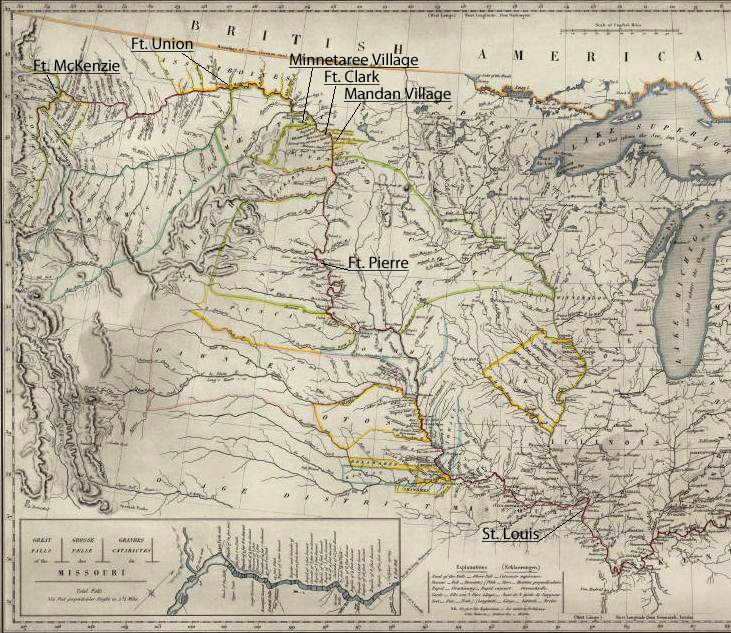 On their return trip, Maximilian and company stayed at Fort Clark in present-day North Dakota from November 1833 to April 1834. As Maximilian recounts, he and the other inhabitants of the fort endured extreme hardships. The roof of their living quarters leaked—the moisture threatening to ruin their notes, specimens, and drawings. As their food and other provisions ran low, they struggled to restock their supplies due to the extreme cold and heavy snow. Another time Bodmer’s paints and oils solidified due to the cold winter weather. Worst of all, their health was seriously jeopardized, as the prince’s journal entry indicates:

On the 11th of March I felt the first symptoms of an indisposition, which daily increased, and soon obliged me to take to my bed. It began with a swelling in one knee, and soon extended to the whole leg, which assumed the colour of dark, extravasated blood (…)At the beginning of April I was still in a hopeless condition, and so very ill, that the people who visited me did not think that my life would be prolonged beyond three or, at the most, four days. The cook of the fort…one day expressed his opinion that my illness must be the scurvy, for he had once witnessed the great mortality among the garrison of the fort at Council Bluffs,(…) He said that(…) on that occasion, at the beginning of spring, they had gathered the green herbs in the prairie, especially the small white flowering Allium reticulatum, with which they had soon cured the sick. I was advised to make trial of this recipe, and the Indian children accordingly furnished me with an abundance of this plant and its bulbs: these were cut up small, like spinage, and I ate a quantity of them. On the fourth day the swelling of my leg had considerably subsided, and I gained strength daily. [Maximilian, Prince of Wied’s Travels in the Interior of North America, vol.3, London, 1843, pp. 75-82]

Also at Fort Clark, Bodmer witnessed a scalp dance of the Hidatsa which they performed in February, 1834, in commemoration of an enemy they had killed the previous day. Bodmer created a vivid watercolor sketch of the dance and the prince provided a detailed description in his journals. [Maximilian, Prince of Wied’s Travels in the Interior of North America, vol.3, London, 1843, pp. 67,68]

Rendering the Native American portraits was no simple task: they often required diplomatic skills. While at Fort Clark, Bodmer painted the portrait of the deaf-mute Mandan Machsi-Nika in his war dress. Afterwards, an old trader was making fun of him, telling him that the artist was portraying him in his regular war dress and not in his finest robes like the other Mandans. Machsi-Nika was outraged and demanded satisfaction from Maximilian and Bodmer. American Fur Company agent James Kipp was called to mediate. Meanwhile, Bodmer quickly produced a copy of his sketch, which he showed to him, and tore and burned it in the fire, thus destroying the image and insult. [Maximilian, Prince of Wied’s Travels in the Interior of North America, vol.3, London, 1843, p.68,69]

However, there were also less stressful portrait sittings. In winter of 1833/1834 Bodmer became friends with Mandan chief Mato-Tope, or “Four Bears,” whom Bodmer portrayed at Fort Clark. Bodmer depicted the chief as he might appear in readiness for war, with the symbols of his heroic war deeds exposed on his body. In addition to several coup feathers, he wears six colored wooden sticks in his hair, indicating wounds received in battle, as well as a wooden replica of a knife he once took from a Cheyenne chief during hand-to-hand combat. The large turkey feather symbolizes an injury he received from an arrow. The owl feathers at the back of his head identify him as a member of the prestigious Dog Society. The large hand painted on his chest indicates that he had captured prisoners. Mato-Tope was a favorite subject of artists, and had been painted by George Catlin previously. In contrast to Catlin, who was largely a self-trained painter, Bodmer was a trained, highly skilled artist, whose work was more detailed and refined and had a sense of truth. He was as much concerned with accurately depicting details of clothing and accessories as with portraying the individual personalities of tribal members.

Similar to Catlin, Bodmer hoped his North American work would secure his financial and professional future. Unfortunately, it did neither, although the French awarded him a Legion of Honor.