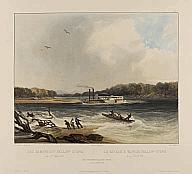 Karl Bodmer
The Steamer Yellow Stone on the 19th April 1833

Part I:  The Trip Out One of the most recent changes in Crystal Bridges’ Early Nineteenth-Century Gallery is the new exhibition of Karl Bodmer’s hand-colored aquatint prints. While the previous exhibition explored a lesser-known side of this artist (Bodmer as naturalist and landscape artist), Scenes from the 1833/34 Upper-Missouri provides a selection of different adventures, events, and vistas along the artist’s amazing journey across North America. 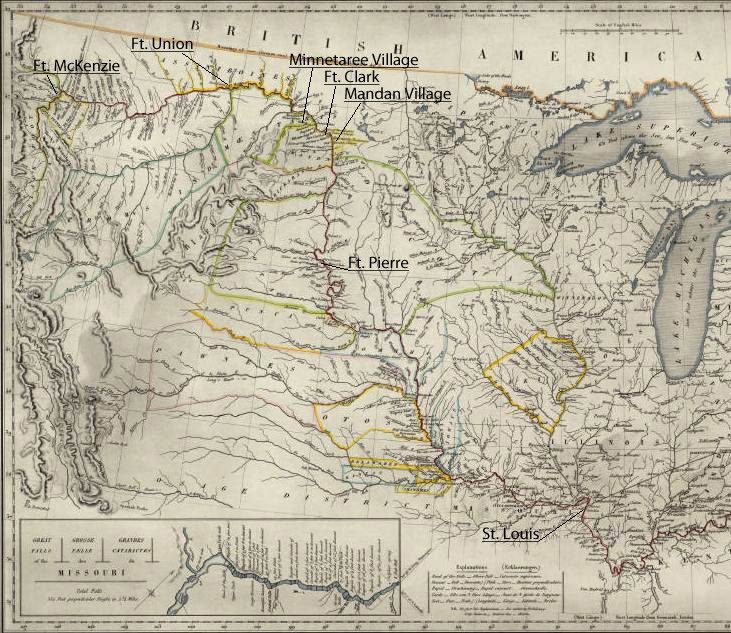 The journey of Karl Bodmer and Prince Maximilian.

In 1832, German naturalist and ethnographer Prince Maximilian of Wied conducted one of the earliest expeditions to the American West to record the natural history and the indigenous population of the region. He had studied with Johann Friedrich Blumenbach (1752-1840), a German physician, naturalist, and anthropologist. Maximilian’s expedition members were Swiss-born artist Karl Bodmer, who created drawings and field sketches for the prince’s book publication, and David Dreidoppel, Maximilian’s servant and skilled hunter-taxidermist. Although they were not the first to explore the American West and record their observations, they were the first team combining a trained scientist and a skilled artist (one of the major oversights of the 1804-06 Lewis and Clark expedition), whose collaboration resulted in a publication of unique art historical, scientific, and ethnological importance: Travels in the Interior of North America (Koblenz and Paris, 1839-43.)

Bodmer’s drawings and paintings show great versatility and technical virtuosity, and provided viewers in the East and in Europe with a detailed picture of previously little-known landscapes west of the Mississippi, as well as insights into the changing life of Native Americans. He supervised the transfer of his field studies and sketches to aquatint plates for Maximilian’s publication. (The three-volume book and the portfolio of eighty-one hand-colored aquatints are in the Museum’s permanent collection.)

The prince’s expedition largely followed the Lewis and Clark expedition route along the Missouri River. He and Bodmer were also familiar with George Catlin’s travels three years earlier; however, Catlin only went to Fort Union, near today’s North Dakota/Montana border, whereas the Maximilian’s expedition traveled further west, to Fort McKenzie, Montana, at the mouth of the Marias River. Amazingly, most of these early explorers survived their adventures without major harm (with the exception of Sergeant Charles Floyd, who died of a ruptured appendix during the Lewis and Clark expedition. Lacking antibiotics and ignorant of the proper surgical procedures, no early nineteenth-century physician could have saved him.)

Prince Maximilian prepared the 5,000-mile journey very thoroughly, and conducted the expedition in a Humboldt-like manner, producing research in different scientific fields. In July 1832 the expedition team visited the Philadelphia museum of naturalist-artist Titian Peale, which, according to Maximilian, had the best collection of natural history in the United States, including objects from the Lewis and Clark expedition. (NOTE:  This museum was founded by Peale’s father, the artist Charles Willson Peale, who painted the portrait of General George Washington in Crystal Bridges’ collection.)  He and Bodmer also bought Peter Rindisbacher watercolors from the 1820s, and viewed George Catlin’s paintings of 1830, thus learning from the artists who preceded them. In Pennsylvania, the explorers visited German naturalist Dr. Saynisch and they wintered in New Harmony, Indiana, where they frequently met with artist-naturalist Thomas Say, who had accompanied Major Stephen Harriman Long’s expedition to the Rocky Mountains as zoologist in 1819-20; and like Saynisch provided them with valuable information. 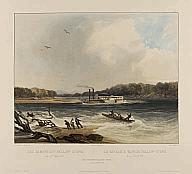 During their odyssey on the Ohio and Mississippi rivers up the Missouri River, the travelers from Europe suffered from several illnesses and injuries, and Maximilian frequently wrote about their health conditions in his daily journal entries. According to this source, Dreidoppel suffered from vomiting and diarrhea, and the prince also from abdominal pains in August 1832. This may have been mild cases of cholera, which was wide-spread in the eastern parts of the United States during that time. Both the prince and Dreidoppel were sick again in fall, which delayed the team’s departure from New Harmony, Indiana, for several weeks

[You can read more about in The North American Journals of Prince Maximilian of Wied.  All three volumes are available in the Crystal Bridges Library: (E165. W6413 2008) it’s a fascinating publication with wonderful illustrations by the prince and many natural remedies for snake bites, scurvy, and other illnesses.]

While the prince was ill, Bodmer traveled on his own down the Ohio and Mississippi rivers in January, 1833, and spent a week in New Orleans, Louisiana, before returning to New Harmony. He made his first studies of North American Indians on the lower Mississippi, but nothing documenting this voyage was included in the picture-atlas. All along the Missouri River, the expedition members faced several adversities: low water and snags necessitated frequent unloading and reloading of the boat’s cargo.

When their Steamer Yellow-Stone stopped at Fort Leavenworth, Kansas, most of the brandy, which they needed to preserve specimens, was seized. Violent storms and strong currents drove the boat ashore and damaged it. Many of Maximilian’s botanical and zoological specimens were ruined by the water. (In fact, he discovered that some of the boat’s crew members were tossing his collections overboard.) And finally, specimens that he shipped home via steamboat were lost in an onboard fire. On August 28, 1833, during their stay at Fort McKenzie, the westernmost establishment of the American Fur Company on the upper Missouri, Bodmer witnessed a party of some 600 Assiniboine and Cree attacking a Blackfeet camp outside the fort, inflicting considerable casualties and damages. That experience, combined with reports of other hostilities in the area, prevented Maximilian and Bodmer from traveling further west to the Rocky Mountains.