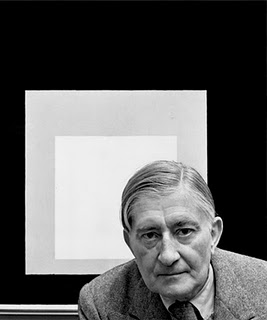 Interaction of Color includes a number of color plates that demonstrate the points Albers makes in his lessons.  He also encouraged students to collect swatches of colored paper to experiment with and to use in working through the exercises he outlines as a means of demonstrating how colors influence one another when placed side by side, or when one color is placed against the background ground of another.

The analogy Albers gives at the beginning of the book is a powerful one in describing how context influences our experience of color:

Imagine in front of is 3 pots containing water, from left to right:

When the hand are dipped first into the outer containers, one feels—experiences—perceives—2 different temperatures:

Then dipping both hands into the middle container, one perceives again 2 different temperatures, this time, however, in reversed order

Though the water is neither of these temperatures, but of another, namely

He goes on to demonstrate, through exercises, how various juxtapositions of colors can make the same color look completely different, or two different colors look alike. His work also demonstrates and discusses the phenomenon of the afterimage produced when we look steadily at a particular color for a time and then suddenly look away.

Even a cursory study of Albers’s book gives a new depth to the experience of his Homage to the Square series: we begin to see that the subject of these paintings is not squares so much as the color that inhabits them, and the relationships those colors create between and among themselves.  In one lesson, Albers refers to individual colors as “actors,” to an assembled group of colors as a “cast,” and to the particular juxtapositions and weights given to each color as a “performance.”  He described painting as “color acting.” 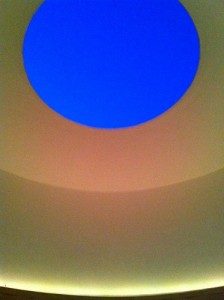 A view from inside James Turrell’s Skyspace, “The Way of Color”

You can see some color in action in James Turrell’s Skyspace The Way of Color, which puts Albers’s color theories through their paces as the color projected on the ceiling of the Skyspace changes viewers’ perception of the color of the sky seen through the oculus.  You can read more about that here.

Crystal Bridges’ Library holds a beautiful two-volume, 2009, Yale Press edition of Interaction of Color available in the open stacks, plus one of the rare original 1963 editions (only 2,000 were produced) which features 80 color silkscreens in separate folders and a 40-page commentary in a cloth drop-back box slipcase. You can view this rare and beautiful book by appointment.