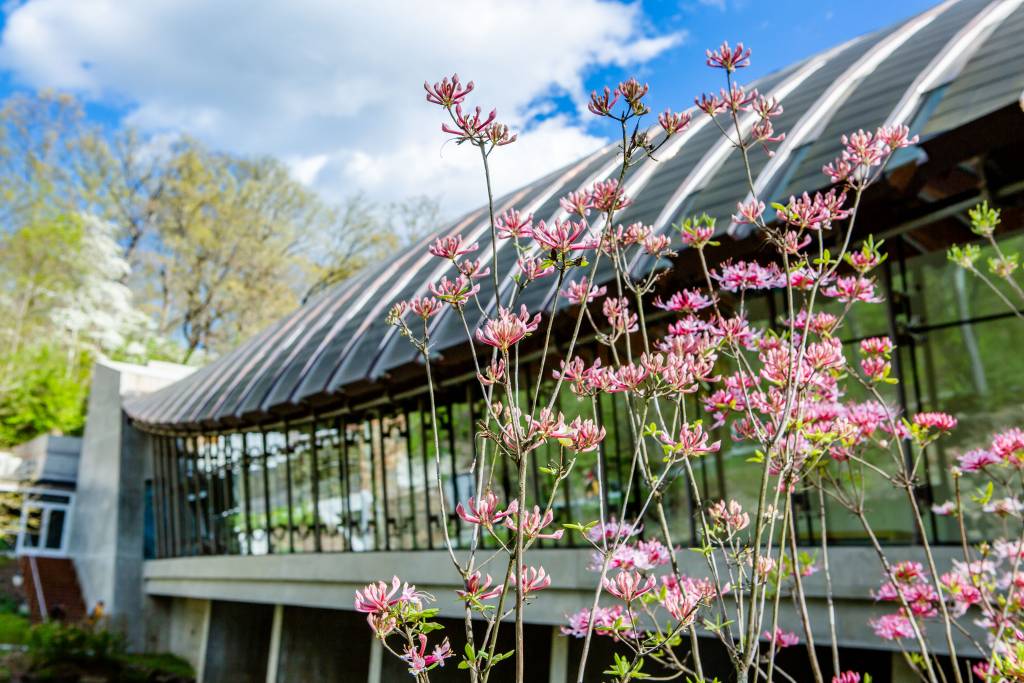 CB: Our 120 acres are very typical of what you’ll find anywhere else in the middle of the Ozarks. We have a plethora of insects, birds, reptiles, and mammals, such as fox, possum, deer, coyote, squirrels, the list goes on.

I’ve seen five or six different types of snakes. We do have copperheads. We’ve had water moccasins before. We mostly have banded water snakes which get pretty big, but they are non-poisonous―others include King snakes and ratsnakes (a black snake that might get three to five inches thick, but they’re good―they eat lots of rodents).

We estimate we have anywhere from 6 to 20 new deer born on our property every spring. They will be splendidly legged, spotted baby deer bouncing around with their mother for the next couple of months. They are very comfortable with our area now (they acclimated during the museum’s construction). The greenway at the north end of our property keeps them in a forested area well into Bella Vista, Missouri, and beyond, so they have a corridor in which they can enter and exit Crystal Bridges.

Unfortunately, I’m not a big fan of the deer. Our guests love them, which is a plus, but they do eat a lot of plants―I estimate they eat $10-15,000 worth of plants every summer. They’re also the biggest carrier of ticks in the woods, and ticks reproduce dramatically because of the deer population―not great considering all the diseases ticks carry. We’d love to not have as many deer, but that’s difficult to achieve.

Can you tell us about the crystals found on the trails at Crystal Bridges? Where did they come from? What was the process like installing them on the grounds? CB: We have an interesting boulder crystal display on the western side of the pond. Crystals do not happen naturally right around here―those were a gift from a crystal mine that’s about 200-250 miles to the south of us near Hot Springs, in an area where you can find some of the best crystal mines on the planet. The owner of the mine donated these boulders that are strewn with hundreds of crystals (some tiny, some as large as a fist), and when he offered us these boulders, the team here wanted to come up with an interesting way to display them. We thought it would be interesting to find a way to display them altogether, so we partnered with one of our contractors, Boulder Construction―who created many of the rock walls you see throughout the grounds―and came up with an idea of creating this crystal grotto―an opening in the side of a cliff that you found these crystal boulders as if they had occurred that way in nature.

What is this species of flower? Does it have a smell? How often does it bloom? CB: This is actually a shrub and it’s called Deciduous Azalea. It’s not really native to the Ozarks, but we found it near some planting beds that we were able to confirm were planted by the previous owner of the property, Dr. Neil Compton. Dr. Compton was a family friend and neighbor of the Waltons, and he is widely recognized as the founder of the Ozark Society to Save the Buffalo River. It’s cool to find bits of his tinkering throughout the woods here. At one point, he used Crystal Spring as his source of water for a nursery and would try to sell native plants from the Buffalo River to people locally.

That azalea was a leftover bush of his that is now in an area that’s shadier than it would prefer, but every year, it comes back with these glorious, white flowers. They don’t have a lot of smell, compared to other flowers, but it is spectacular because the flowers just hang there on these barren bushes all by themselves. It’s beautiful―I love to see it every year. It only flowers for three to five days.

Can you tell us a little about the blooming season on the grounds? CB: Here are the highlights of how things bloom throughout the spring in Northwest Arkansas: The first blooms that you’ll see start with the serviceberry trees. They are an understory tree that is about the same size as dogwoods and redbuds, but it creates a puffy, white bloom that becomes an edible berry, which looks like a blueberry. The serviceberry trees bloom around the end of March.

Then, we move on to the redbuds―they usually come out at the end of March/beginning of April. The blooming process takes a couple of weeks. Then, the next thing that blooms is the dogwoods. It’s a little different every year―last year, April 20, 2019, was a full bloom. We’re a little early this year―we’re fully bloomed out right now and we’ll have about another week to enjoy them in full bloom.

Do you have a favorite plant or flower that grows on the grounds and why? 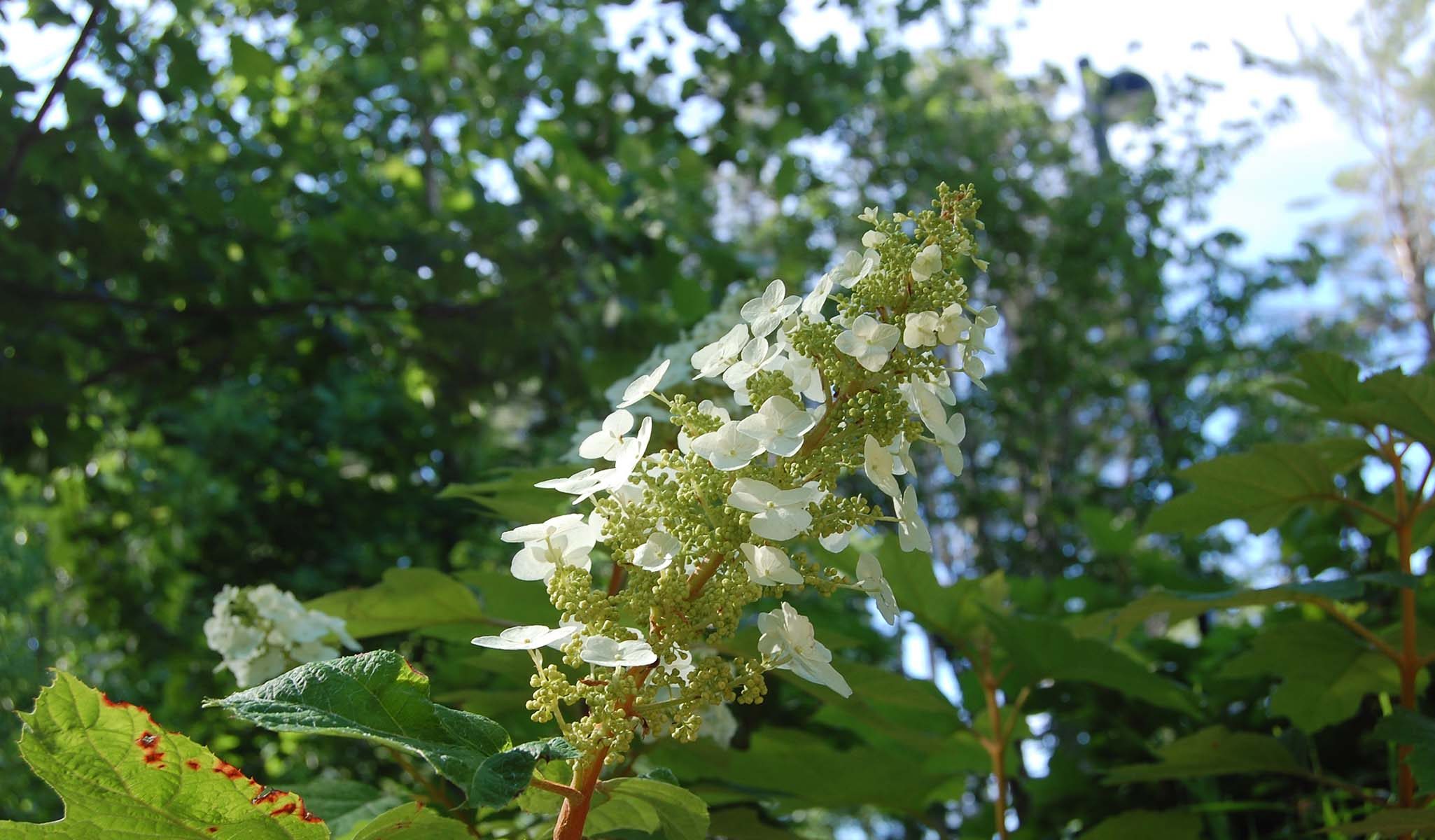 CB: That’s like asking me, “which of your children is your favorite,” but if I had to pick, my favorite plant is the Oakleaf Hydrangea, and, this is not necessarily a coincidence, we have the Alice variety of this hydrangea all around our grounds. It’s a pretty big bush―it gets anywhere from six to eight feet high and wide―and it has huge panicles of flowers. It blooms in June and it can bloom for up to a month. Then in the fall, the foliage turns a variety of colors from orange to red, which is just spectacular. It’s a super hearty, super successful plant here on the grounds.

What are the benefits of controlled or prescribed burns in the forest? CB: That is a big topic for us because the museum is surrounded by forest. We’ve used prescribed burns to keep this place healthy and safe. Here’s how it works: if you have an accumulation of leaf litter, something small like a cigarette flick in heavy wind could create a really bad, intense fire. It’s dangerous for everyone, so we have small, controlled fires where we burn off all those dead leaves in an area of the forest. We pick the exact right day and conditions so that the fire doesn’t become something big and bad. We usually do them during the winter, under supervision with the Bentonville Fire Department and another partner such as the Nature Conservancy or the Arkansas Forestry Department.

Check out our Plant Guide or download the CB Outdoors app on your mobile device to learn even more about the plants and animals found on the Crystal Bridges grounds.

Special thanks to our sponsors:

Facilities, Trails, and Grounds are supported in part by Bissell, Blue Rhino, and Paul and June Carter Family.