The Bachman-Wilson House: Arrival in Arkansas 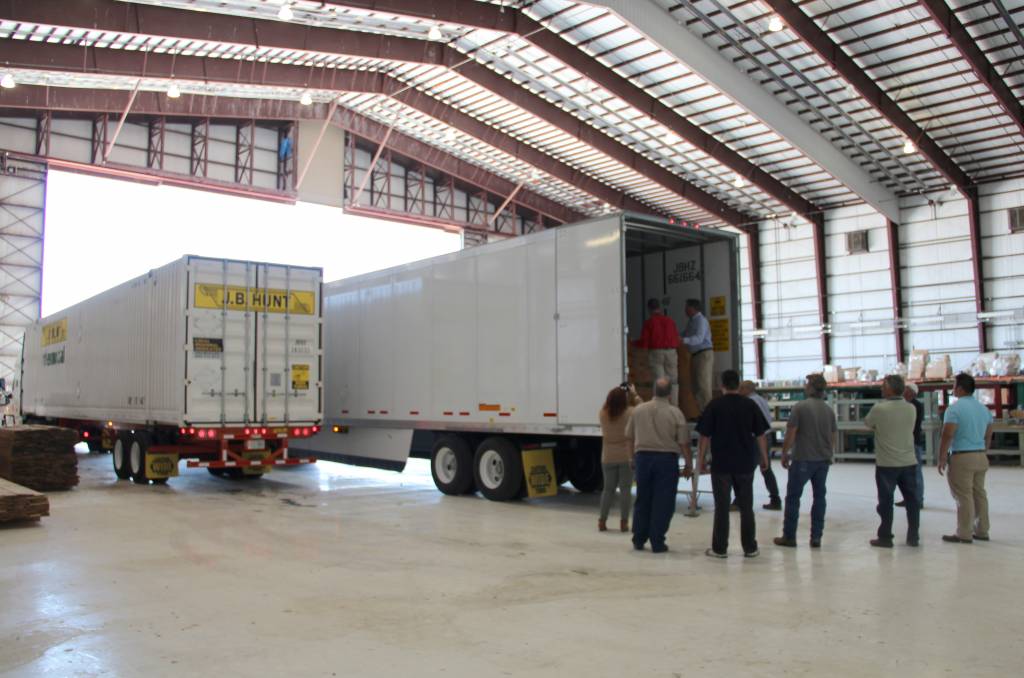 On Tuesday afternoon, April 22, two trucks arrived at a storage facility in Northwest Arkansas, transporting with them the structural contents of a 1954 Usonian house designed by renowned architect Frank Lloyd Wright: the Bachman-Wilson House. The house arrived in two shipping containers: one made the 1,235 mile journey from New Jersey by truck; the other traveled by intermodal transit, which utilizes both the railroad and roadways. 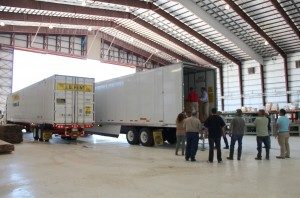 J.B. Hunt Transport, Inc. generously donated its services, transporting the Bachman-Wilson House to Bentonville at no cost to the Museum. A team from the company joined several members of Crystal Bridges’ staff to witness the arrival of the containers. 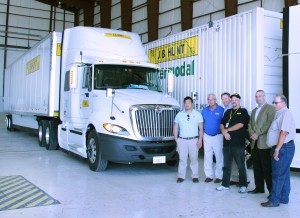 The J.B. Hunt team who made the transportation of the Bachman-Wilson House to Crystal Bridges possible.

The shipment itself was delivered to the facility by J.B. Hunt drivers Richard Leiner and Joe Vlaun—between them over 47 years and 5 million safe miles behind the wheel of a tractor-trailer. To put that in perspective, that’s like driving around the planet over 200 times. The two drivers backed the tractor-trailers into the storage facility with greater ease and confidence than most people display while parking a compact car. 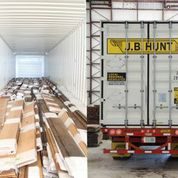 A glimpse into the back of one of the trailers, revealing the bundled, labeled and stacked boards that make up the house’s floors and walls.

The Bachman-Wilson House has now traveled a great distance, but there is still a long road ahead. “It looks like a year’s worth of work,” Crystal Bridges Director of Facilities and Grounds Scott Eccleston quipped, as the doors of the first container were breached and he surveyed, for the first time, the stacks of bundled boards and wrapped fixtures.

Inside the storage facility, the materials will be carefully inventoried and inspected for any damage. The pieces for each room will be laid out to ensure that all of the necessary elements are present and intact. Eventually, these sections will be transported to the Museum’s grounds.

Meanwhile, at Crystal Bridges, a fence has been erected around the future site of the Bachman-Wilson House. Site preparation and foundation work will commence in the coming weeks and continue throughout the summer. Images and videos of the construction process will be shared regularly on the Museum’s website.

Once fully reconstructed at Crystal Bridges, the house will be available for study as well as for limited programming and tours, beginning in the spring of 2015.