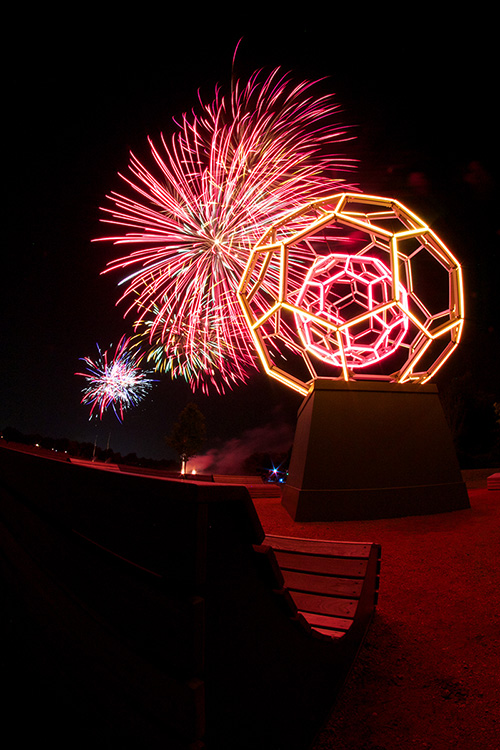 Since then, the sculpture has attracted many visitors to Crystal Bridges with its brilliant and colorful light display, which currently begins at 7:30 p.m. and continues until 11:00 p.m. nightly (hours are adjusted seasonally). During daylight hours, the sculpture features a more subdued white light pattern. Buckyball is highly visible at night from the Museum’s entrance and has become a hub for evening events and social gatherings. “Light has a very powerful effect,” Villareal said. “It’s something that is deeply ingrained in us. I think my pieces operate on a level that looking at a fire does. I’ve described my works several times as ‘digital campfires.’ They’re harnessing that same thing that happens with a fire — the way that it’s pleasant to be near that light.” Future events related to Buckyball include a community bike ride on June 4, and an outdoor screening of the film Contact near the sculpture on July 25. Additional information can be found on Crystal Bridges’ website. About Leo Villareal For more than a decade, Leo Villareal has been a pioneer in the merging of art and innovative light technology. Recently, the debut of the artist’s installation, The Bay Lights, on the San Francisco Bay Bridge received world-wide attention and acclaim. Villareal’s work often reduces forms to basic components — such as pixels or the ones and zeros found in binary code — to better understand their underlying structures and how they function. He then builds these fundamental elements into interactive light installations that move, change and grow into complex compositions in order to explore them on a larger scale. Leo Villareal is known internationally for his light sculptures and site-specific architectural works. His art is part of the permanent collections of prestigious institutions including the Museum of Modern Art, New York; Naoshima Contemporary Art Museum, Kagawa, Japan; and the Albright-Knox Art Gallery, Buffalo, NY.