Today, in the journal Education Next, researchers from the University of Arkansas College of Education and Health Professions share the results of a study analyzing the impact of school field trips to Crystal Bridges Museum of American Art on students in grades K–12. In the study of 10,912 students, surveyed at 123 schools, the research team found that field trips to cultural institutions have significant benefits for students.

“We found that students who attended a school tour at Crystal Bridges demonstrated stronger critical thinking skills, displayed higher levels of tolerance, had more historical empathy and developed a taste for being a cultural consumer in the future,” said Jay P. Greene, 21st Century Chair in Education Reform and head of the Department of Education Reform at the University of Arkansas College of Education and Health Professions, who conducted the study along with senior research associate Brian Kisida and doctoral fellow Daniel H. Bowen. “We also found that these benefits were much larger, in general, for students from rural areas or high-poverty schools, as well as minority students,” added Greene.

Crystal Bridges School Field Trip Program:
Since its opening on 11/11/11, Crystal Bridges set forth to be a valuable educational resource for the region. A generous donation from the Willard and Pat Walker Charitable Foundation of Springdale, Ark., established a $10 million endowment for Crystal Bridges to provide school groups with funds necessary for a complete museum visit, including funding to cover the cost of transportation and substitute teachers if needed, lunches for the students and teachers, and pre- and post-visit educational materials. Funds are available to all public and private K–12 schools; the program began in 2012.

Each school visit includes a one-hour guided tour of the museum’s permanent collection, a discussion and activity session around a theme, and a healthy lunch prepared by Eleven, the museum’s restaurant. Teachers are able to choose from several themed tours, each designed to connect with Common Core standards at a variety of grade levels in art, history, social studies, language arts and sciences.

“Since Crystal Bridges is in an area where an art museum had not previously existed, and because the field trip is free to schools, we had high demand for the tours and decided to select participants via a random lottery,” said Anne Kraybill, Crystal Bridges’ school programs manager. “In initial meetings with the University of Arkansas, it became clear that this lottery system would provide the right conditions for conducting research.”

The Research Study:
During the first two semesters of the school tour program, Crystal Bridges received 525 applications from school groups representing 38,347 K-12 students. Greene, Kisida and Bowen matched pairs among the applicants based on similarity in grade level and other demographic factors. “An ideal and common matched pair would be adjacent grades in the same school,” said Greene. “We then randomly ordered the matched pairs to determine scheduling prioritization. Within each pair we randomly assigned which applicant would be in the ‘treatment’ group—the group that would receive a tour that semester—and which would be in the control group, whose tour would be deferred to a later time.”

The team administered surveys to 10,912 students and 489 teachers at 123 different schools. Surveys of paired treatment and control groups occurred on average three weeks after the treatment group received its tour. The surveys included items assessing student knowledge about art, as well as measures of student tolerance, historical empathy, and desire to become cultural consumers. After the survey assessment, each control group was guaranteed a tour during the following semester as a reward for its cooperation.

The team also collected critical thinking measures from students by asking them to write a short essay in response to a painting that they had not previously seen. Finally, they collected a behavioral measure of cultural consumption by providing all students with a coupon good for free family admission to a special exhibition at the museum to see whether the field trip increased the likelihood of students making future visits.

The Results:
“Our research suggests that students actually retain a great deal of factual information from their tours, as students who received a tour of Crystal Bridges were able to recall details about the paintings they had seen at very high rates,” said Greene. For example, 88 percent of the students who saw the Eastman Johnson painting, At the Camp—Spinning Yarns and Whittling, knew when surveyed weeks later that the painting depicts abolitionists making maple syrup to undermine the sugar industry which relied upon slave labor. 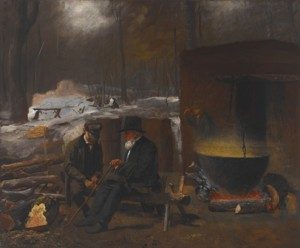 Similarly, 82 percent of those who saw Norman Rockwell’s Rosie the Riveter could recall that the painting emphasizes the importance of women entering the workforce during World War II. 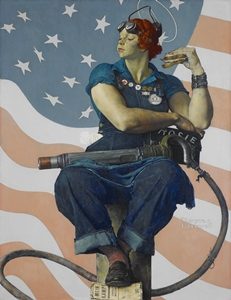 Among students who saw Thomas Hart Benton’s Ploughing It Under, 79 percent could recall that it is a depiction of a farmer destroying his crops as part of a Depression-era price support program. 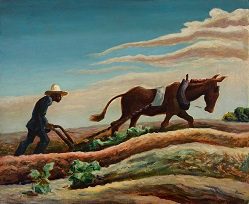 70 percent of the students who saw Romare Bearden’s Sacrifice could remember that it is part of the Harlem Renaissance art movement. 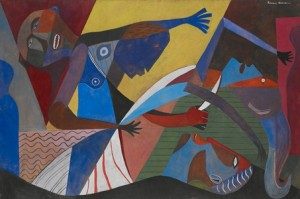 And 80 percent of students who saw Kerry James Marshall’s Our Town recognized that it offers an African American perspective of real and idealized visions of the American dream. 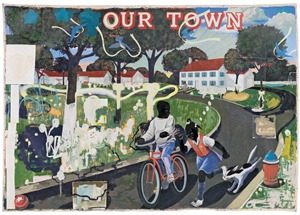 The research team also analyzed students’ critical thinking skills, tolerance, historical empathy (ability to understand and appreciate what life was like in different eras), and interest in visiting cultural institutions in the future. “We wondered if, besides recalling the details of their tour, did visiting an art museum have a transformative effect on students?” said Greene. “Our study demonstrates that it did.”

During the first semester of the study, the team showed all 3rd through 12th grade students a painting they had not previously seen and asked students to write short essays in response to two questions: “What do you think is going on in this painting?” and “What do you see that makes you think that?”

Similar results were seen in assessing tolerance and historical empathy as well, and ultimately, students who received a school tour returned to the museum for an additional visit at a higher rate than students who had not. “All students who participated in the study during the first semester were provided with a coupon that allowed them and their families free entry to a special exhibition at the museum,” said Kraybill. “The coupons were coded so that we could determine the applicant group to which students belonged. Despite having recently been to the museum, we found that students who received a school tour came back at higher rates.”

For a full analysis of the team’s results and additional details about the study, read the Education Next report  here, and view a supplemental study here and the methodological appendix here.

What’s Next:
As a result of the study, Crystal Bridges has increased capacity of the field trip program, serving more than 27,500 students and teachers to date with a comparable number of participants expected this school year. The museum’s next initiative in serving K-12 students and teachers is to develop a large-scale distance learning program that can extend these results into the classroom and provide more access to students throughout the nation and world. “This project is in the formative stage of development, and is informed by current research in the field and recommendations of peer museums and arts organizations that gathered at a Distance Learning Summit held here in July, 2013, funded by the Windgate Foundation,” said Kraybill. “As this initiative is further refined, funding will be identified to ensure its sustainability, and the results will be shared on a broad basis.”

The dissemination of the study to arts and education stakeholders including a future convening of K-12 educators and the launch of an even more rigorous distance learning research design is supported by a $50,000 gift from First Quality Enterprises, Inc.

The University of Arkansas Department of Education Reform is sharing the information as well to communicate implications for the types of field trips in which schools participate to educators, administrators and policy makers. “Culturally enriching field trips are in decline in public education, and museums across the country report a steep drop in school tours,” said Greene. “This research shows that the trips have significant benefits for students, and particularly disadvantaged students. These results should be an important consideration in the assessment and distribution of resources.”

Click here to view an archive of the press conference.

About Crystal Bridges
The mission of Crystal Bridges Museum of American Art is to welcome all to celebrate the American spirit in a setting that unites the power of art with the beauty of nature.

Situated on 120 wooded acres in Bentonville, Arkansas, Crystal Bridges was founded in 2005 by the Walton Family Foundation as a nonprofit charitable organization for all to enjoy. Philanthropist and arts patron Alice Walton chairs the Museum’s board of directors. The building was designed by world-renowned architect Moshe Safdie and opened to the public on 11-11-11. Crystal Bridges’ growing collection spans five centuries of American masterworks from the Colonial era to the current day. The permanent collection is enhanced by a variety of temporary exhibitions. In addition to the art collection, Crystal Bridges also features a library housing more than 50,000 volumes of art reference material.

Since its opening, the Museum has welcomed more than one million visitors and garnered more than 7,900 households in its membership. More than 27,500 schoolchildren have visited the Museum as part of the Willard and Pat Walker School Visit Program, and nearly 700 volunteers provided more than 24,000 hours of service. The Museum’s inaugural year also saw the establishment of the Tyson Scholars of American Art, a residency program providing research funding for topics in American art history, as well as the Don Tyson Prize, awarded to an individual for outstanding service in the field of art history.

Additional information about Crystal Bridges is available online at CrystalBridges.org.

About the University of Arkansas Department of Education Reform
The Department of Education Reform in the College of Education and Health Professions at the University of Arkansas was established in 2005. Its mission is to advance education and economic development in Arkansas and nationwide by focusing on the improvement of K-12 schools through the study of five priority areas: accountability, leadership, policy, teacher quality and school choice.

The Department of Education Reform is committed to producing and disseminating high-quality research in these five areas that will inform policymakers, scholars, parents, teachers, administrators and the general public about policies and practices that could improve the performance of schools in Arkansas and nationwide.
By gathering a critical mass of leading researchers focused on education reform, the Department of Education Reform is uniquely positioned to have a meaningful impact on education policy research and the quality of schools. uaedreform.org