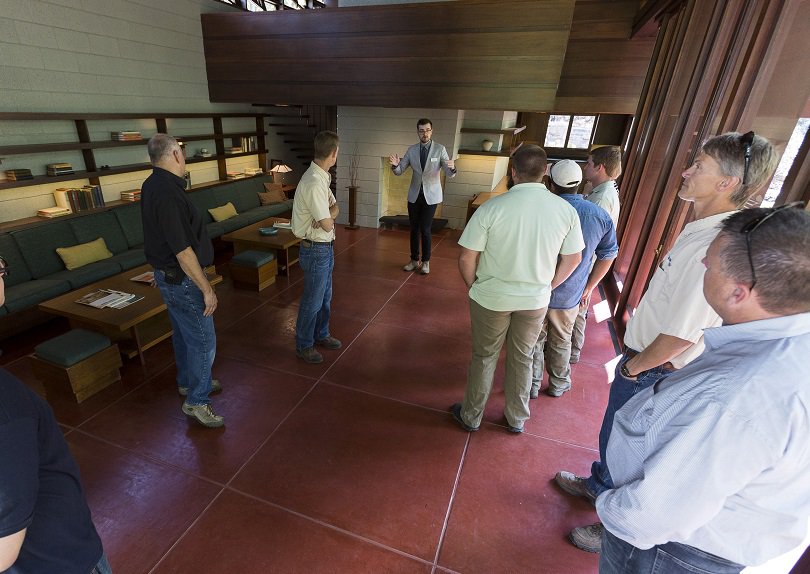 Crystal Bridges Museum of American Art previews the newly reconstructed Frank Lloyd Wright’s Bachman-Wilson House on the museum grounds. Adjacent to the museum’s south entrance, the house will open to the public on November 11, 2015. Reservations are required and tickets will be available on November 2, at no cost. Preview tickets are now available to Crystal Bridges’ members. For more info, visit HERE.

Designed in 1954 for Gloria and Abraham Wilson, the house was originally built along the Millstone River in New Jersey. The house was subsequently purchased by architect/designer team Lawrence and Sharon Tarantino in 1988. Threatened by repeated flooding from the river, the Tarantinos determined that relocating the house was the best option for its preservation. After a multi-year search for a suitable location, Crystal Bridges acquired the house in 2013. Crystal Bridges Executive Director Rod Bigelow said, “This was an opportunity to preserve an important example of American architecture and enhance our mission to connect visitors to art and nature. The house also deepens the rich architectural story in our region.” Frank Lloyd Wright’s protégé was Arkansas native Fay Jones, who inspired Moshe Safdie’s design of Crystal Bridges. All three architects were awarded the American Institute of Architects’ Gold Medal—considered to be the profession’s highest honor. Both Wright and Jones challenged traditional ideas of building by connecting their structures to the typography of their enviornment, and these structures influenced Safdie to integrate Crystal Bridges into its natural surroundings. Bigelow adds, “This is not the end of the narrative. We hope that by providing viewing and educational opportunities to thousands of visitors every year, the house will inspire future generations of architecture students.” The house was disassembled piece by piece and transported 1,200 miles, arriving to the museum in the spring of 2014 where site work was already underway. Reconstruction began in the fall of 2014, led by Scott Eccleston, Crystal Bridges’ Director of Operations, Ron Shelby, architect with Hight Jackson Associates, and Bill Faber with Bill Faber Construction.

Usonian Architecture
The word Usonian was derived from an abbreviation of “United States of North America.” Wright embraced this term as the name for a distinctly American and democratic style of architecture. He developed this style during the Great Depression and built approximately 120 Usonian homes. “The goal for reconstruction was to create an authentic experience by integrating the house into the natural landscape so it feels like it has always been here. For visitors, whether they are Frank Lloyd Wright experts or architectural novices, we want them to be transported by the architecture,” said Crystal Bridges Chief Engagement Officer Niki Stewart. “We put great effort into upholding Frank Lloyd Wright’s design principles — he believed in connecting physically and spiritually to the natural world through the use of horizontal lines that ground the structure into the landscape and dissolve the barrier between the interior and exterior.” “I’d like to have a free architecture. I’d like to have architecture that belonged where you see it standing, and was a grace to the landscape instead of a disgrace.” – Frank Lloyd Wright The approximately 1,700-square-foot house sits on a highly-elevated two acre site with building and design characteristics that include:

Building Crystal Bridges Along with the opening of the Frank Lloyd Wright house, a focused exhibition is located in the corridor that leads to the museum’s south lobby, giving visitors an opportunity to explore the stories behind the museum’s conception, design, and construction for the first time. Presented in six cases, Building Crystal Bridges tells the tale through texts, images, time-lapse photography, drawings, plans, architectural materials, and invitations to explore specific features of the buildings and grounds. Surprising connections are revealed between architects Moshe Safdie, Arkansas native Fay Jones, and Frank Lloyd Wright.

About Crystal Bridges
The mission of Crystal Bridges Museum of American Art is to welcome all to celebrate the American spirit in a setting that unites the power of art with the beauty of nature. We explore the unfolding story of America by actively collecting, exhibiting, interpreting, and preserving outstanding works that illuminate our heritage and artistic possibilities. Opened to the public on 11-11-11, Crystal Bridges was founded in 2005 by the Walton Family Foundation as a nonprofit charitable organization for all to enjoy. Philanthropist and arts patron Alice Walton chairs the Museum’s board of directors. Since its opening, the Museum has welcomed more than two million visitors, and garnered 9,000 membership households. Some 89,000 school children have participated in the Museum’s Willard and Pat Walker School Visit program, which provides educational experiences for school groups at no cost to the schools. More than 240,000 visitors a year utilize the Museum’s 3.5 miles of walking trails. Crystal Bridges takes its name from a nearby natural spring and the bridge construction incorporated in the building, designed by world-renowned architect Moshe Safdie. A series of pavilions nestled around two spring-fed ponds house galleries, meeting and classroom spaces, and a large, glass-enclosed gathering hall. Guest amenities include a restaurant on a glass-enclosed bridge overlooking the ponds, Museum Store designed by architect Marlon Blackwell, and a library featuring more than 50,000 volumes of art reference material. Sculpture and walking trails link the Museum’s 120-acre park to downtown Bentonville, Arkansas. Crystal Bridges’ permanent collection spans five centuries of American masterworks ranging from the Colonial era to the current day. Included within the collection are iconic images such as Asher B. Durand’s Kindred Spirits, Norman Rockwell’s  Rosie the Riveter, and Andy Warhol’s Coca-Cola [3]— each reflecting a distinct moment in American artistic evolution—as well as major works by modern and contemporary American artists, including Georgia O’Keeffe, John Baldessari, and James Turrell. The permanent collection, which continues to grow through a strategic acquisition plan, is on view year-round and is enhanced by an array of temporary exhibitions, which were viewed by some 242,000 visitors in 2014. Crystal Bridges provides year-round programming for all ages. In 2014, more than 500 public programs were offered, including lectures, performances, classes, and continuing education for K-12 teachers. An award-winning app, available free for both Apple and Android devices, features audio tours of current and past exhibitions, and many of the Museum’s lectures and gallery talks are available in Crystal Bridges’ iTunes U site. A new initiative to develop high-quality distance-learning opportunities for students and teachers begins this year. Crystal Bridges also offers two research fellowship programs. The Tyson Scholars in American Art program supports full-time scholarship in the history of American art. The Reese Teacher Fellowship provides for research into the development of interdisciplinary connections between American art and core curriculum subjects of language arts, history, social studies, and the sciences. Additional information about Crystal Bridges is available online at CrystalBridges.org.