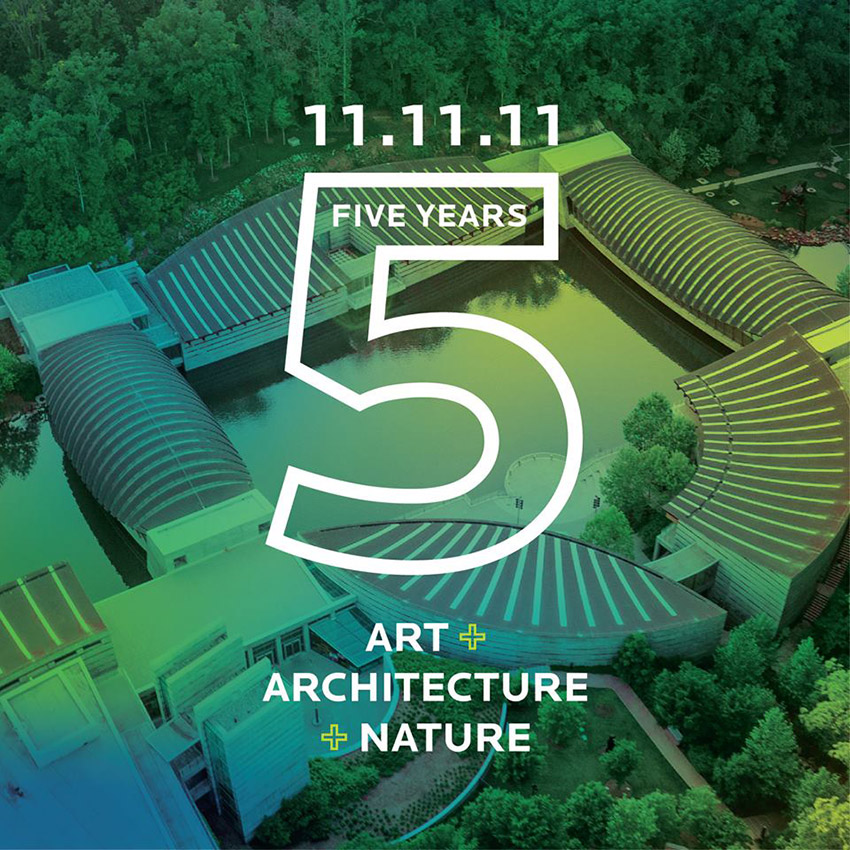 Crystal Bridges Museum of American Art opened its doors five years ago on November 11, 2011 after years of planning and construction.  Since then, the museum has welcomed over 2.7 million people from all around the world.

When Crystal Bridges was proposed, annual attendance was estimated at some 150,000 to 250,000 guests. Attendance exceeded expectations from the onset, with more than 650,000 visitors in the first year and 500-600,000 in the years since. Approximately 50 percent of the visitors are new to the museum, while 50 percent are returning. Visitors hail from all 50 states and six out of the seven continents, including places like Brazil, Germany, Hong Kong, Israel, Russia, Switzerland, and Zimbabwe. Thanks to a $20 million grant from Walmart in 2011, visitors have enjoyed and will continue to enjoy admission to Crystal Bridges and its permanent collection at no cost. Below is the geographic breakdown based on 2015 attendance data:

Reflecting on the five-year anniversary, Crystal Bridges founder and board chair, Alice Walton, noted, “I knew this museum was needed. I grew up here and didn’t have access to art and I knew we wanted to change that. What I underestimated was how much people wanted to have access to that great art. Our team has done a wonderful job capturing repeat visitors and making it truly a community center. I think that’s a really important part. I’ve never met anybody in the museum who doesn’t talk about feeling welcomed.”

The museum was founded in 2005 by the Walton Family Foundation as a non-profit private operating foundation for all to enjoy. Soon after inception an application process was initiated to convert from private operating to public charity status. After a five-year assessment, the museum has received official notification of its public charity status.

“We are thrilled to have met the qualifications of this new designation that represents who we’ve always been–a public institution focused on providing access to great art experiences for all,” says Rod Bigelow, Crystal Bridges Museum of American Art Executive Director & Chief Diversity and Inclusion Officer. “Similar to other non-profit museums, Crystal Bridges is supported by a variety of sources from corporations to foundations and individuals. The public charity status ensures we will continue to have a variety of funding sources and opens up even more possibilities for grants and support that will help broaden the reach of Crystal Bridges’ educational programs.”

The permanent collection spans from colonial times to the present day. Since the museum’s founding, the number of objects in the collection has grown from 1,555 to more than 2,400. Recent highlights include Jimson Weed/ White Flower No. 1 by Georgia O’Keeffe, The Chelsea Girl by James McNeill Whistler, and Maya’s Quilt of Life by Faith Ringgold.

Margi Conrads, Crystal Bridges Director of Curatorial Affairs, notes, “Our growing collection is guided by our desire to reflect the complexity of the American spirit. We aspire to offer experiences in the galleries that resonate in our visitor’s lives, creating conversations, inspiring reflection or action, deepening learning, and providing the joy of an encounter with an original work of art. An increasing number of collaborations and partnerships help provide some of the important pathways to a more inclusive presentation of American art.”

Soon after opening, Crystal Bridges announced American Encounters, a four-year collaboration with The Musée du Louvre, the High Museum of Art, and the Terra Foundation for American Art. This partnership was aimed at broadening appreciation for and dialogue about American art both within the U.S. and abroad.

To date, there have been 68 outgoing loans, including the museum’s beloved Jimson Weed, on loan to The Tate Modern in London as part of this year’s O’Keeffe retrospective. The portrait of George Washington by Charles Wilson Peale is another example. It is currently on loan to the Smithsonian Institution’s National Portrait Gallery in Washington DC as part of the exhibition America’s Presidents.

In addition to the collection, the museum offers a wide range of temporary exhibitions, such as the popular American Chronicles: The Art of Norman Rockwell, on view in 2013. Since opening, 13 major temporary exhibitions have been on view including The Art of American Dance, on view through January 16, 2017. The highest attended exhibition in the museum’s five-year history is State of the Art: Discovering American Art Now, which drew a record-breaking 175,000 people.

State of the Art culminated a year-long process in which Crystal Bridges’ curatorial team logged more than 100,000 miles, crisscrossing the country to visit artists in rural communities, small towns, and urban centers. The exhibition helped increase awareness of the presence of great artists living and working in every corner of the US. Since the debut at Crystal Bridges in 2014, two versions of this exhibition continue to travel to museums, bringing its message of inclusion and discovery to new audiences. The 2016-17 travel schedule includes the following venues:

Nestled within 120 acres of beautiful Ozark landscapes, the museum’s 3.5 miles of trails attract approximately 300,000 visitors annually. In the year ahead, Crystal Bridges’ trails and grounds will become even more accessible, thanks to a new entrance on the northeast side of the museum, expected to open in spring 2017. The entrance will include an elevator tower to the museum’s galleries and a pedestrian bridge connecting to expanded northeast trails. Other trail improvements include widening to provide better access for guests of all abilities.

During 2017, the enhanced area will serve as the venue for the first extensive outdoor exhibition. Chihuly: In the Forest opens May 27, 2017. The exhibition will feature hand blown glass sculptures sited throughout the north forest area, complemented with an extensive indoor installation throughout the museum’s temporary exhibition galleries.

The architecture of Crystal Bridges is as inspirational as the galleries, connecting visitors with art and nature. Internationally renowned architect Moshe Safdie designed Crystal Bridges to complement the surrounding Ozark landscape, and in 2015, Safdie was awarded the Gold Medal from the American Institute of Architects (AIA). This award is considered to be the profession’s highest honor in the field of architecture, and in the press release announcing the award, Crystal Bridges was referenced as one of Moshe Safdie’s “most notable” works.

Architect Marlon Blackwell, recipient of the 2016 Cooper Hewitt National Design Award in Architecture, designed the museum store at Crystal Bridges to be an organic complement to the museum’s natural setting and distinctive architecture.  Blackwell practices architecture in Fayetteville, Arkansas, and serves as distinguished professor and department head in the Fay Jones School of Architecture at the University of Arkansas.

In 2013, Crystal Brides acquired a classic “Usonian” house designed by celebrated American architect Frank Lloyd Wright, who also received the prestigious AIA award. Known as the Bachman-Wilson House, the structure was originally built in 1954. Crystal Bridges preserved it from its original site in danger of repeated flooding, reconstructed on the museum grounds, and opened to the public on November 11, 2015.  Since then, nearly 80,000 visitors have enjoyed touring the house, free of charge.

As part of the museum’s mission to welcome all to experience the power of art and the beauty of nature, access is a central focus for Crystal Bridges. In addition to offering free admission, Crystal Bridges strives to enhance elements that give visitors a sense of belonging. Visitors are greeted with a warm welcome and art-related materials, such as family and audio guides as well as comprehensible text and gallery labels. This focus is one that founder Alice Walton recognized as paramount to the success of Crystal Bridges.

Explained by museum founder Alice Walton, “It goes back to the root of museums. In Europe, when they first developed, museums were thought of as a place for the elite and the upper class. That tradition carried over into most of the first museums in this country. And it is still present—in the architecture, the grandeur, and the design of those original buildings—they are still kind of intimidating to most people. I knew that we wanted a place that did not have that intimidating feel.”

The museum complex includes a library, a restaurant and coffee bar, a hands-on experience art studio for kids, and since opening, has offered some 3,000 programs including art-making classes, artist talks, workshops, and performances.

In addition, a new department of access and inclusive programs has made special, targeted efforts to improve access for English language learners, adults and children with autism, guests who are deaf or with partial hearing loss (or hard of hearing). These efforts, aimed to increase access for visitors with disabilities and engage diverse audiences for a more inclusive experience, will continue to grow in the years ahead.

Crystal Bridges is expanding the notion of accessibility beyond the museum walls and into the classroom by providing learners of all ages with relevant, curriculum-based programming. Thanks to the Willard and Pat Walker School Visit Program, more than 140,000 students have visited the museum on field trips from 171 districts and 9 states, as far away as San Antonio, Texas.

A groundbreaking education study conducted in 2014 measured, for the first time, the effects on students of a one-time school visit to an art museum. The results showed that these students not only retained the information they received during the program, they also showed a significant increase in creative thinking skills, as well as a higher level of tolerance and an increase in empathy. The study results led to the museum launching a Distance Learning Project, offering free, online art-related courses for high school students.

The Tyson Scholars of American Art Program was established in 2012 and supports full-time scholarship in the history of American art and visual and material culture from the colonial period to the present. The residency program provides housing and access to the museum’s art and library collections. Since its inception, the Tyson Scholars program has supported the work of 15 scholars, attracting museum and academic professionals in a variety of disciplines from across the world. Alongside the scholar program, the Don Tyson Prize was also created by the Tyson family and Tyson Foods and awards $200,000 for outstanding achievement in American art. The first recipient was the Archives of American Art, Smithsonian Institution, Washington, DC.

In addition, we recently announced that we will begin development of an innovative visual art space, performance venue for music, film, and theatre, and multi-disciplinary artists-in-residence program to be housed within a freestanding building in downtown Bentonville. The project will involve adaptive reuse of a decommissioned Kraft Foods plant, located 1.5 miles south of Crystal Bridges, into a vibrant facility for visual and performing arts. We expect the new venue to open in 2019.

The current exhibition is The Art of American Dance, which lends itself well for inspiring events to celebrate this five-year milestone. Programs include:

Crystal Bridges opened our doors on 11-11-11. Five years later, we want to show our appreciation to our members and guests that have made this Museum great. Join us to celebrate our fifth anniversary and explore the temporary exhibition The Art of American Dance with Thomas F. DeFrantz who will present the interactive performance FastDANCEPast, using green-screen technology with live dancers. Defrantz will share how he created this uniquely designed performance incorporating technology, and discuss cross-cultural relations found in dance history embedded in the performance.

Crystal Bridges opened its doors on 11-11-11. Five years later, we want to show our appreciation to our members and guests that have made this Museum great. Join us to celebrate our fifth anniversary with an evening of dance at Art Night Out! Enjoy dance inspired by The Art of American Dance, from big-band swing to disco and techno. The evening’s performances include FastDANCEPast with SLIPPAGE, an interactive multimedia show exploring dance history using green-screen technology; an environmental dance by Native American contemporary dance company Dancing Earth; Performers from Tulsa Modern Movement in the galleries; and a classical Isadora Duncan dance by choreographer Alice Bloch. A cash bar will available for guests ages 21 and up with appropriate ID.