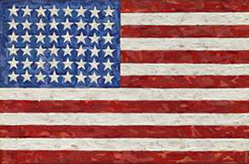 Crystal Bridges Museum of American Art announces the acquisition of Jasper Johns’ Flag (1983, encaustic on silk flag on canvas) and will be exhibiting the work as part of a Flag Day weekend debut in a focused area in the museum’s permanent collection gallery. A member preview with curator Chad Alligood is scheduled for June 12 with the public opening on June 13. 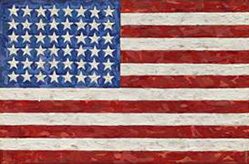 “We look forward to commemorating this iconic American work during Flag Day weekend,” said Crystal Bridges Executive Director Rod Bigelow. “The flag is the most enduring of Johns’ subjects, appearing in more than 90 works throughout his career. This acquisition enhances our ability to tell the stories of shifting art movements in late 20th-century American art.” In 1954, a dream of an American flag inspired Jasper Johns first rendition of the subject.  Thereafter, he created flag paintings, drawings, prints, mixed-media collages, and sculptures, including, nearly three decades later, the Crystal Bridges’ painting. Johns grew up in South Carolina and was named for an ancestor famous for rescuing a flag during the Revolutionary War. The subject kindles personal and symbolic meaning, yet for Johns, painting the flag went beyond the representation of the United States’ most famous icon. With a painterly style at odds with the crisp design of the actual object, he charges the viewer to look past the familiar, something, he explained, “the mind already knows,” to explore the paint itself as subject matter. Johns used the same basic composition for each flag, including 48 stars and 13 stripes, as the first flag was created before Hawaii and Alaska joined the United States. This painting contains a silk flag, collaged on canvas, as its base layer. Johns then painted an image of the flag on top using encaustic, a medium of colored pigment mixed with hot wax. Encaustic emphasizes each brushstroke and individualizes each star and stripe, activating the entire surface with rich texture. “From the 1950s, Johns’ art has vibrated along the division lines of modern art’s hierarchy, embracing and challenging ideas of abstraction, representation, subject matter, and the relationship of art to the personal and universal,” said Crystal Bridges Director of Curatorial Affairs, Margi Conrads. “With the first flag painting he offered a departure from Abstract Expressionism by reintroducing the use of conventional objects such as a flag, with a technique that stressed conscious control yet includes accidents and suggests spontaneity.“ Other subject matter in his work included numbers, maps, targets, and letters, as seen in Johns’ Alphabets, 1960-62, which is part of Crystal Bridges’ permanent collection and is on view in the museums’ 1940s to Now gallery. Conrads added, “Johns’ work opened up the discourse of cultural symbols, inspiring several movements also represented in our collection including Pop, Minimal, and Conceptual art.” Since 1983, Crystal Bridges’ Flag has been in the private collection of Mark Lancaster, a British artist and assistant to Mr. Johns. “We’re excited to share Flag with a wide audience and invite our visitors to reflect on the celebratory and emotional significance of the American flag. And then, take a closer look to further explore the painterly layers of pigment, wax, and the meaning beyond the symbol,” added Bigelow.