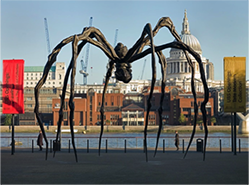 Quarantania recently debuted in Crystal Bridges’ 1940s to Now Art Gallery, in a focused area featuring artists’ depiction of the human form. Although Quarantania’s life-size figures are simplified and abstracted, they represent deeply personal and complex facets of Louise Bourgeois’s own life and relationships. The figures’ tight grouping evokes the feeling of close emotional relationships. Shaped like shuttles used in weaving, they are linked to the artist’s childhood and the tools used by her parents, who restored antique tapestries as a profession. Quarantania likely represents the artists own family at the time, with herself in the center carrying packages, surrounded by her husband and three sons. The hanging packages allude to the artist’s role as caretaker for her family and the burden of childcare. The title of the work (from French: quarante, meaning 40) likely refers to Bourgeois’s age, a subject she explored throughout her career: she turned 40 in 1951. Two landmark works from the 1940s, Connecticutiana (below) and Untitled (left), are also part of this acquisition. While the paintings of Louise Bourgeois have been widely acclaimed and exhibited in the United States and Europe, this marks the first acquisition of Bourgeois paintings by a museum in the United States. These paintings will debut in the 1940s to Now Art Gallery in summer 2015. “Bourgeois immigrated to the United States from Europe, bringing with her an important new artistic vocabulary and a powerfully feminine perspective,” said Crystal Bridges Curator, Chad Alligood.  “Her biomorphic forms, seen in both her sculptures and paintings, reflect the milieu of European Surrealists who came to America during and after World War II. Her works were emotionally-charged and often rooted in deeply personal themes that nevertheless resonate with a universal human experience. Because of her remarkably diverse body of work, Bourgeois’s approach resonates with a cross-section of American artists represented in our permanent collection, including Ruth Asawa, Mark Rothko, and Jackson Pollock.” 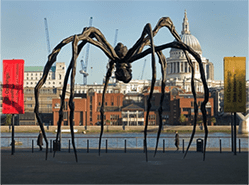 The monumental sculpture Maman, (from French: mama), measures more than 30 feet in both length and height, and will be installed on the museum’s grounds later this year. The earliest examples of the spider image appeared in Bourgeois’s work in the late 1940s as drawings. The first spider sculpture cast in bronze was made in 1990. Bourgeois said of the spider works, “The Spider is an Ode to my mother. She was my best friend. Like a spider, my mother was a weaver. My family was in the business of tapestry restoration, and my mother was in charge of the workshop. Like spiders, my mother was very clever. Spiders are friendly presences that eat mosquitos. We know that mosquitos spread diseases and are therefore unwanted. So, spiders are helpful and protective, just like my mother.” In 2000, Bourgeois was commissioned to create Maman for the opening of Turbine Hall Gallery, part of Tate Modern in London. Bourgeois saw this as an opportunity to create the single largest and most elaborate spider in her career. Maman would be shown there along with Bourgeois’s monumental towers as the inaugural exhibition in that gallery. This work was the welded steel version from which the molds were made by the Modern Art Foundry for the subsequent six bronze casts. In the years following the London exhibition, other casts of Maman entered the collections of the National Gallery of Canada, Ottowa; the Guggenheim Museum, Bilbao; the Mori Art Museum, Tokyo; The Leeum, Samsung Museum of Art, Seoul; and Qatar Museums, Doha. The original welded steel sculpture is in the permanent collection of the Tate Modern. While it was always Bourgeois’s ambition to see Maman, the largest-scale work she ever created, owned or exhibited in the United States, her home for more than 70 years, she died in 2010 with that dream unrealized. “Crystal Bridges is honored to fulfill the late artist’s wish to have Maman exhibited in an American art museum,” said Bigelow. “The sculpture adds to our collection with sophisticated engineering and stainless steel armature, which will engage viewers and challenge our ideas of architecture and sculpture.”