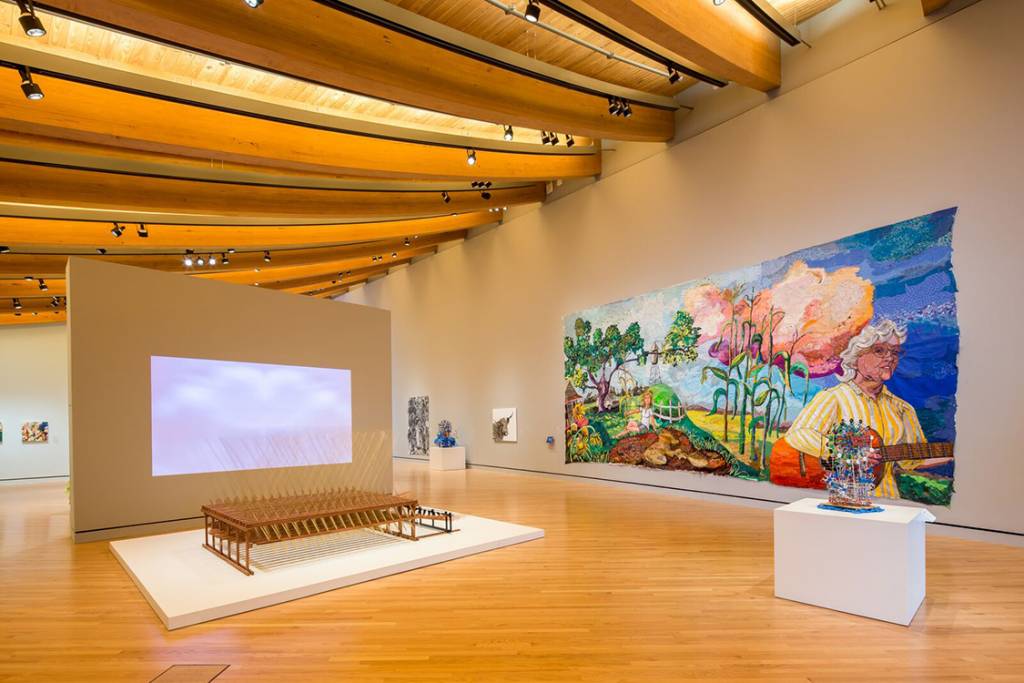 Crystal Bridges Museum of American Art announces that its State of the Art: Discovering American Art Now exhibition,which debuted at Crystal Bridges Art in 2014,  will be traveling to the Minneapolis Institute of Art, Minneapolis, Minn., February 18 – May 29, 2016, Telfair Museums, Savannah, Ga., February 19 through September 4, 2016  and Dixon Gallery and Gardens, Memphis, Tenn. January 29 through March 26, 2017.

State of the Art culminated a year-long process in which Crystal Bridges’ curatorial team logged more than 100,000 miles visiting artists in small towns and urban centers, exploring creative communities all over the country. This one-of-a-kind exhibition was viewed by 175,000 visitors as recently reported by ARTnews and captured the national spotlight with stories on CBS Sunday Morning, The New York Times and Huffington Post.

“State of the Art represents our largest exhibition in terms of size, scope, and attendance and the first time a Crystal Bridges-curated exhibition has traveled,” said Rod Bigelow, Crystal Bridges Executive Director. “The success put State of the Art on the forefront of discussion about art in America and positioned the exhibition for a life beyond our walls. We’re delighted that the exhibition will be visiting other parts of the country and eager to see how the works will connect with new audiences in different ways.”

State of the Art at Crystal Bridges

On view from September 13, 2014 – January 19, 2015, the exhibition featured 102 artists and 227 artworks ranging from works on canvas and paper to photography and video to installation, performance art, and more. Additional resources such as the State of the Art website were created to highlight artworks, themes, regions, and 60 videos of the artists in their studios. More than 70 State of the Art programs were offered including a free public symposium and a multi-day summit with thought-leaders from around the world discussing the state of art in America. School tours served more than 12,000 students, and teacher professional development was offered to 150 educators. Accolades include a 2015 Excellence in Exhibition Award from the American Alliance of Museums (AAM) and awards for exhibitions, technology, and publications from the Southeastern Museum Conference. The journey to discover artists across the U.S. and the resulting exhibition are highlighted in a short video, a precursor to a documentary film debuting in 2016 HERE.

State of the Art on the Road

In an effort to honor the exhibition’s original impulse towards access and inclusion, and to account for the grand scale of the original show, State of the Art will be split into two different versions, both traveling simultaneously. The guiding principle behind curating these two versions of State of the Art was to reflect the spirit, themes, and approaches reflected in the original installation. A majority of the works that appeared at Crystal Bridges will appear in the traveling exhibitions, alongside other works by the artists represented on the original checklist.

“State of the Art captured the public’s imagination. In its scale and ambition, the exhibition made a real impact on our audiences, paving new roads to engaging with contemporary art,” says Chad Alligood, Crystal Bridges curator. “Now, it’s time to share it with other communities. Crystal Bridges remains committed to increasing the public’s awareness of art being created all over the U.S., so it seems fitting that a show that started on the road and in the studios of artists nationwide will have a second life as it takes its own road trip across the country.”