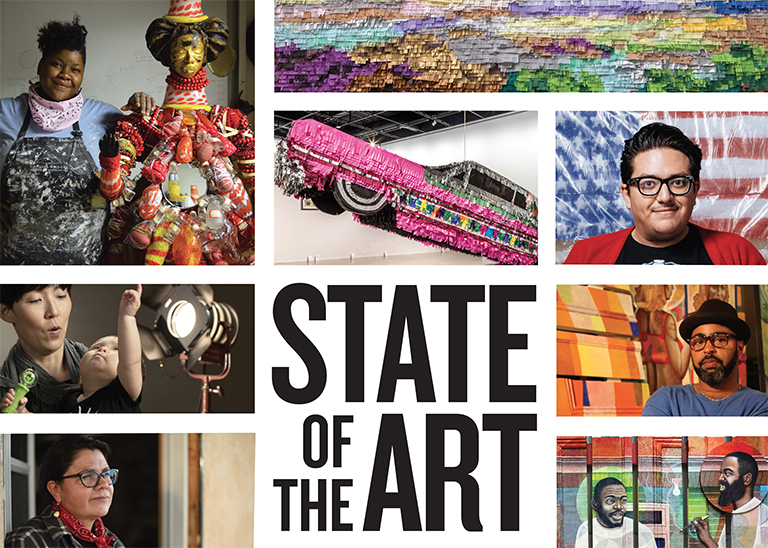 State of the Art: Discovering American Art Now was an exhibition based on a journey in which Crystal Bridges museum curators visited over 1,000 artists across the country, ultimately selecting 102 artists whose work had not yet been recognized on a national level to feature at the museum. The exhibition was on view at Crystal Bridges from September 14, 2014 to January 19, 2015. During that time, more than 175,000 visitors experienced this groundbreaking exhibition. After its opening at Crystal Bridges, the exhibition then traveled to the Minneapolis Institute of Art; Telfair Museums, Savannah, GA; Dixon Gallery and Gardens, Memphis, TN; The Mint Museum, Charlotte, NC; and the Frist Center of the Visual Arts, Nashville, TN.

Haynes, who joined Crystal Bridges in 2016, has developed numerous exhibitions for the museum, including the traveling exhibition The Beyond: Georgia O’Keeffe and Contemporary Art, and served as the institutional curator for the US debut of Soul of a Nation: Art in the Age of Black Power. Prior to joining Crystal Bridges, Haynes spent nearly a decade at The Studio Museum in Harlem, during which time she curated dozens of exhibitions for the museum and contemporary art institutions in New York. Haynes is a recipient of a 2016 Gold Rush Award from Rush Philanthropic Arts Foundation and a 2018 Center for Curatorial Leadership fellow. She recently curated the Focus section at the 2019 Armory Show.

Benedetti curated the Men of Steel, Women of Wonder exhibition currently on view at Crystal Bridges.  Glenn is curating the recently announced Color Field exhibition, which will debut in June in Crystal Bridges’ North Forest.

Similar to the first journey, Haynes, Benedetti, and Glenn have been visiting contemporary artists around the country and determining a selection of artists and artworks to feature at the two venues. “The State of the Art concept involves seeing what’s happening in studios across the country, discovering artists that are exploring topics through unique perspectives and voices,” said Haynes. “Our travels have reinforced that artists all over the US are creating eye-opening, thought-provoking, and fascinating work in all sorts of places, both urban and rural. We’re eager to share the results of these journeys with our visitors.”

As State of the Art 2020 has been developing, a documentary film about the original State of the Art has progressed as well. Creation of the film began while the exhibition was on view at Crystal Bridges, with acclaimed filmmakers Brent and Craig Renaud documenting the show and then exploring the work of some of its featured artists over the next several years. Ultimately, the Renauds captured the personal stories of seven diverse artists featured in State of the Art, traveling from the woods of North Carolina to the deserts of Nevada, the backstreets of Pittsburgh to the foothills of Arkansas, and beyond.

The seven artists featured in the film include Carl Joe Williams (New Orleans), Justin Favela (Las Vegas), Linda Lopez (Fayetteville, Ark.), Peter Glenn Oakley (Banner Elk, NC), Susie J. Lee (Seattle), Teri Greeves (Santa Fe), and Vanessa German (Pittsburgh). “State of the Art tells a story of diverse artists driven to create — with work that is intensely personal, firmly rooted in community, and inseparable from the lives they live,” says Craig Renaud. “Their work offers a window into not only what concerns Americans, but also what lifts them up.”

The one-hour documentary will premiere nationally on PBS on Friday, April 26 at 9:00 p.m. EST. / 8 p.m. CST. The film was funded in part by the Willard and Pat Walker Charitable Foundation Inc. and produced by the Arkansas Educational Television Network. Additional film resources, including a trailer, photos, bios and more, are available at aetn.org/stateoftheart.

For more information and to register, visit the Watch Party » State of the Art Documentary on PBS event page.

Prior to the 8:00 p.m. live viewing of the film, Haynes will host a panel discussion, featuring State of the Art curator Chad Alligood and State of the Art artists Linda Lopez and Carl Joe Williams (both of whom are featured in the documentary). The panel will delve into what it’s like to create art and exhibitions today. 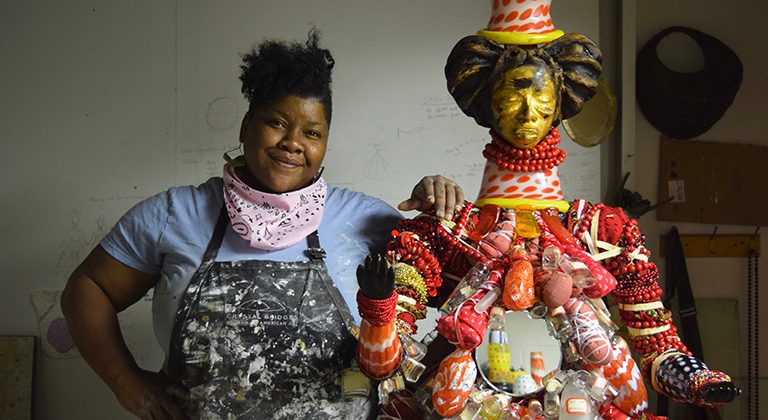 State of the Art artist Vanessa German, who is also featured in the PBS documentary, will visit Crystal Bridges for a lecture on Wednesday, April 24 at 7:00 p.m. as part of the museum’s 2019 Distinguished Speaker Series.

German was the recipient of the 2018 Don Tyson Prize, a $200,000 biennial award for outstanding achievement in American art. As a citizen artist, she is a vigorous advocate for children, creating safe spaces for artmaking amid violence. In recent years, she launched the Art House where she hosts neighborhood children, women and families to create beauty through art and build self-esteem. German is based in the historic neighborhood of Homewood, in Pittsburgh.