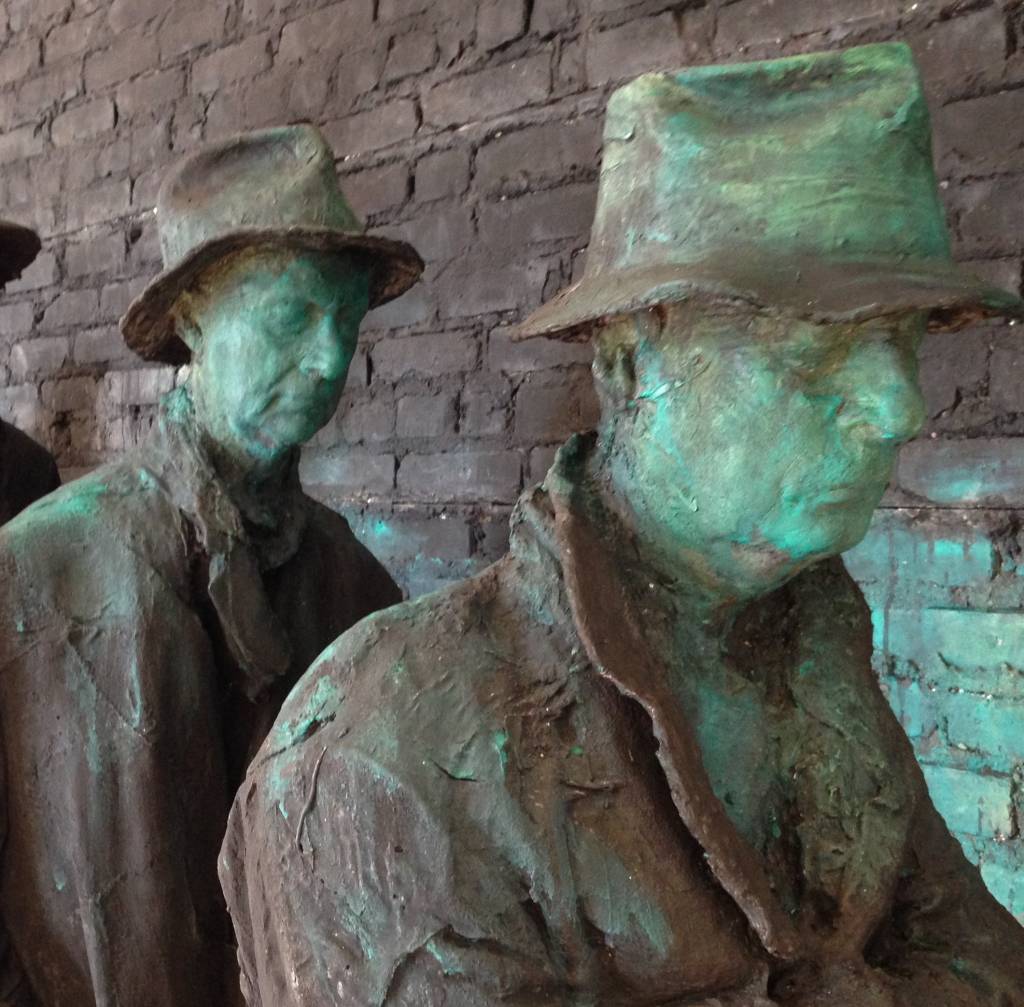 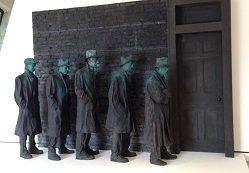 A solemn group of dark figures stand in a row just inside the Early Twentieth-Century Gallery bridge at Crystal Bridges. Slump-shouldered, straight-faced, and dressed in nondescript overcoats and battered hats, the life-sized figures are arranged against a wall of dark brick. These are George Segal’s Depression Bread Line, a recent addition to Crystal Bridges’ permanent collection. Made of plaster, wood, and metal, this sculpture was created in 1991 to be cast in bronze for the FDR Memorial in Washington DC (in 1999). Segal, who was a child during the Depression, had a great respect for Roosevelt. “One of my most vivid memories was of my father shushing everyone in the room when Roosevelt began one of his fireside chats,” Segal wrote. “FDR had a looming, intensely personal relationship with millions, who were convinced he was compassionately on their side. We all cried when his death was announced on the radio in 1945.” 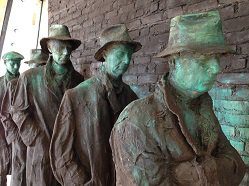 The figures in the work are all life-cast from individuals in Segal’s life, including Martin Friedman, then director of the Walker Art Center in Minneapolis; long-time friend and photographer, Donald Lokuta; Daniel Burger of the Metropolitan Museum of Art; Segal himself; and at the front of the line, Leon Bibel, a neighbor of Segal’s and a former artist for the WPA Federal Art Project who had once himself stood in the Depression-era breadlines. Segal’s wife, Helen, once said that the people chosen as models for this work were the people Segal wanted “to spend eternity with.” Segal brought the figure back into American sculpture when he began making plaster casts in the 1960s. “He started doing this figurative sculpture at a time when it was kind of passé,” said Crystal Bridges Curator Chad Alligood.  “Artists like David Smith, and John Chamberlain had been pushing towards abstraction. But Segal figures out a way to reintroduce the figure into American sculpture, and it’s by casting real life people. One of his students brought dry plaster bandages to class.  Segal took home that material and then, with his wife, he made a full-body cast of himself and sat that figure at a table. No one else was doing that at that moment.” From their beginnings in the ‘60s, cast figures came to dominate Segal’s work. For the most part unpainted, or painted in simple monochrome colors, the figures represented a different approach to the Pop art produced by Segal’s contemporaries such as Roy Lichtenstein, Andy Warhol, and Robert Indiana. “They’re often interpreted as commenting on the alienation that the individual feels in American society in a time that is consumed with images of pop and consumer culture,” explained Alligood. “But I think that’s kind of overblown, because he continued working this way well past the Pop era. There is something sad and strange about them, but they’re also kind of warm and fuzzy and sometimes quite narrative in ways that don’t really bear that initial ‘Pop’ reception of them out.” You can learn more about George Segal at the website of the George and Helen Segal Foundation here. This artwork was transported to Crystal Bridges courtesy of Airways Freight.