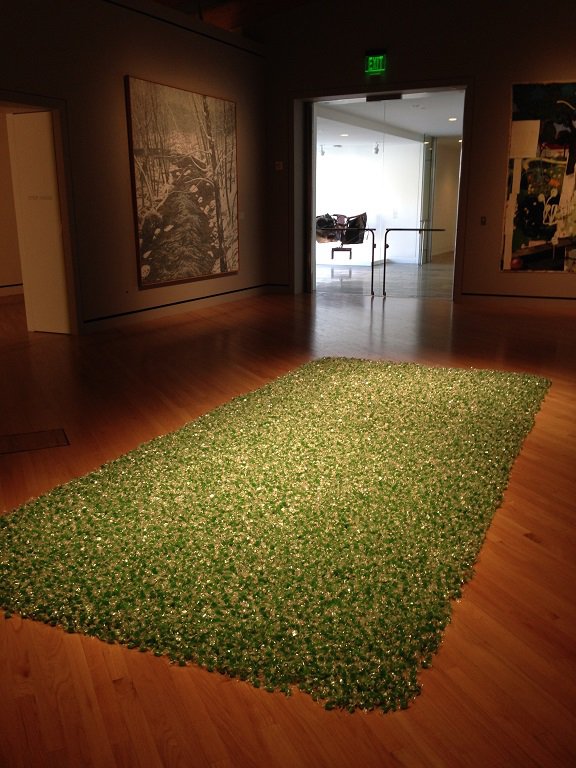 “We need our own space to think and digest what we see. And we also have to trust the viewer and trust the power of the object. And the power is in simple things.”

A strip of hard green candies individually wrapped in cellophane is placed directly onto the museum floor inviting you to take a piece. This work, “Untitled” (L.A.) by artist Felix Gonzalez-Torres, relies on your participation as the viewer to contribute to the work’s power. 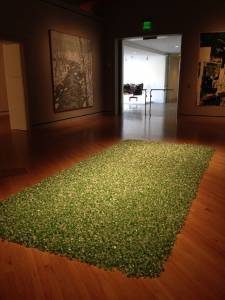 A Minimalist Tradition: Coming from an art historical background, Gonzalez-Torres was impacted by works like those in our collection by Minimalist artists Donald Judd, Dan Flavin, and Brice Marden. Minimalism became prominent in the 1960s, reducing painting and sculpture to essentials. It eliminated recognizable imagery in favor of a single image or object, often based on a grid, or rectangular form. Minimal sculpture eliminated pedestals and even the evidence of the artist’s touch, as it was often produced by industrial fabricators. 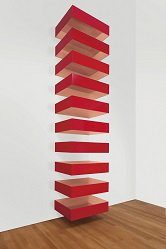 Although these artworks may look mass produced, they are not. They’re individually designed and created and can be surprisingly fragile. For instance, with Donald Judd’s red stack Untitled, 1989 (Bernstein 89-24), a touch from a human hand can oxidize the copper and damage the work. Just like with traditional painting or sculpture, in most cases we interact with a Minimalist work without touching.

Taking cues from Minimalist sculptures, Felix Gonzalez-Torres’s work is geometric, colorful, shiny, and placed directly onto the floor without a pedestal. A major difference is that Gonzalez-Torres used mass-produced objects that can actually be picked up by visitors, taken out of the gallery, and consumed. His decision to work within the established parameters of Minimalism pays homage to the style, but also shows a desire to undo the power of Minimal art by recreating it as vulnerable, changeable, and personal. This work welcomes the viewer, not as mere spectator, but as collaborator.  Once on view, the art is literally in the audience’s hands.

Open-ended Interaction: In “Untitled” (L.A.), one of several candy spills made by the artist, the viewer can literally take part of the work away by taking a piece of candy from the pile. In this way, the object is constantly in transition—shrinking as the audience removes candy and growing again as the spills are replenished by the owner. Here, the artist insists that the beauty of a work of art is not only contained in an enduring, physical art object, but in the moment of experience, of human interaction.

Gonzalez-Torres allows you to physically ingest a part of “Untitled” (L.A.). Can you get closer to a work of art than putting it in your mouth? Do you find it difficult to reach out and take a piece of the artwork, breaking all the rules of how we usually interact with art? We as viewers are careful throughout the Museum not to get too close to artworks, but now we have the freedom to let go of our expected parameters of the art experience. 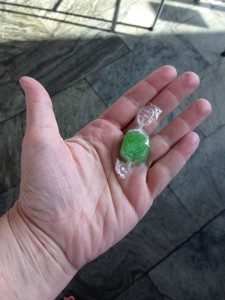 The title itself also offers us another cue to the work’s historical ties as well as its open-ended quality. Many of Gonzalez-Torres’s pieces begin with Untitled and follow with another bit of information in parentheses. By putting the Untitled first, he emphasizes the idea that the notation in parentheses is not the only way to understand the work. The information inside the parentheses suggests one possible meaning, but doesn’t create one.

The parenthetical titles also offer hints at Gonzalez-Torres’s life. Los Angeles was one of the few locations the artist and his longtime partner, Ross Laycock, lived together. In 1991, the year this work was created, Laycock died of complications from AIDS. Relating to this, each of the candy spills includes an ideal weight of the undepleted display. The work gradually dwindles in size, much like the body of the terminally ill. However, as these spills deplete, they are constantly returned to their full, ideal weight by the Museum.

This blog post outlines some traces of a meaning to the work, and not the only meaning. The importance of individual memory and the invitation to participate are paramount to this work. We invite you to visit “Untitled” (L.A.) to complete the meaning for yourself: it’s currently on display in our 1940s to Now Gallery.