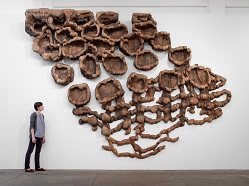 Unraveling, the large wall sculpture on view on the north side of the Early Twentieth Century Gallery Bridge, was created by Ursula Von Rydingsvard in 2007. Von Rydingsvard will visit Crystal Bridges on Sunday, June 8, to give a public lecture about her work (click here to register, if you’d like to attend).  To warm up the audience, here are a few facts about the artist and her work. 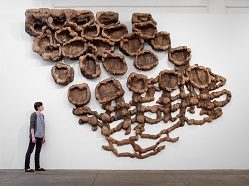 Von Rydingsvard was born Urszula Karoliszyn in 1942 in Germany, the fifth of seven children. Her mother was Polish and her father Ukrainian. Following the German invasion of Poland, the family was moved from one German refugee camp to another between 1945 and 1950. When she was nine, the family immigrated to America, where they settled in Plainville, Connecticut.

It was as a child in the camps that Von Rydingsvard began to develop her fascination for wood:  the rough walls of the wooden buildings they lived in, the wooden bowls and spoons they used, and the hand-carved wooden balls and other wooden objects she played with.  Her work often evokes functional household objects:  bowls, shovels or spoons.

Many of Von Rydingsvard’s works are large free-standing sculptures, installed both indoors and out.  Our wall-mounted work, Unraveling, is seen by the artist as a “drawing” in cedar.

Von Rydingsvard works almost exclusively in rough, milled cedar, manufactured for the construction business. Her early sculptures were more smoothed and shaped, disguising the ready-made aspects of the material, but her mature work is craggy, its rough edges and wood grains fully visible, with harsh saw cuts in the surfaces. Graphite is worked into the wood in places to give it varying shades of gray, black, and brown.

“There’s a toughness to the work,” said Director of Curatorial David Houston. “It’s about the materials, it’s about texture. She works with the materiality of the wood and lets the wood retain a lot of its original properties as she works.”

Von Rydingsvard never makes a preliminary drawing or sketch before beginning her sculptures.  She starts at the bottom with an initial footprint drawn on the floor of her studio, and improvises as she moves up, one piece of wood at a time. She draws directly on the wood, and “cutters” — trained and experienced woodworkers who assist her in the studio — come along behind and make the cuts. Each layer is placed and attached to the one below it.

Once the work is complete, it is disassembled and then reassembled with glue between the layers. The artist turns up the heat in her studio to “cook” the glue into a solid bond. The works often have to be cut into sections again to be installed.

Unraveling was inspired by a flood that took place at Von Rydingsvard’s home in Brooklyn, New York. “My entire yard turned into a river,” she said in an interview in December, 2010[1]. “It was truly alarming and anger-provoking that I had no control over what the river needed to do. It carried …whatever was in the yard…down with it. It took whatever it wanted to take….[Unravelling] expresses an interest in the flow of energy from something that might have, at one time, felt very substantial to a kind of dissolution … as it makes its way downward.”