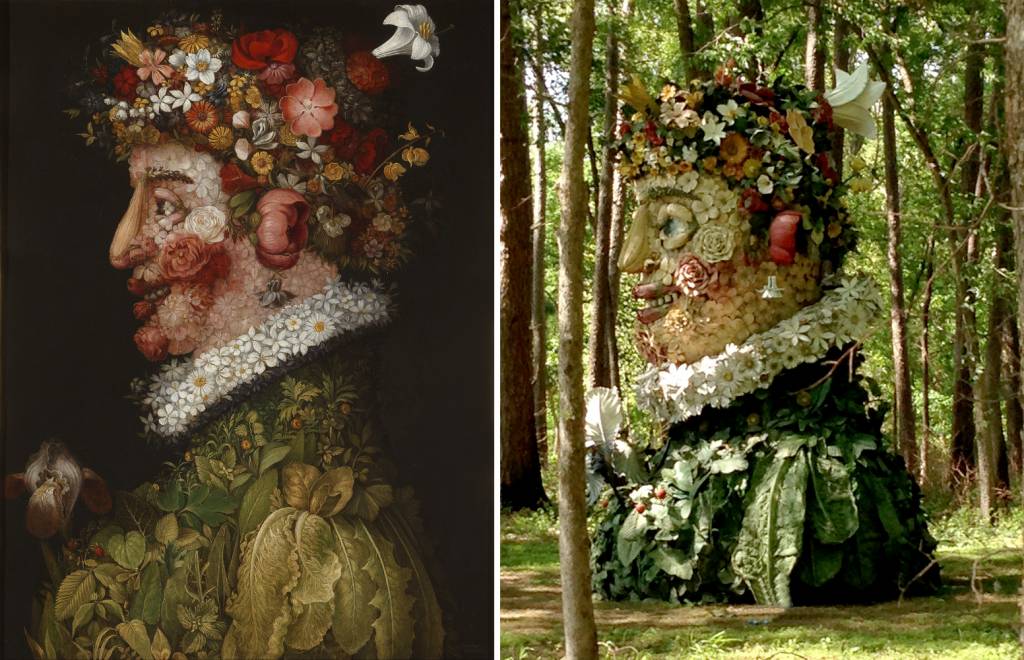 Philip Haas’s set of monumental outdoor sculptures, The Four Seasons, are on display on the grounds at Crystal Bridges through the summer. These colorful and fanciful works are a perfect complement to the beautiful museum grounds as spring brings our wildflower beds to life.  This weekend the Museum offers up our second annual Garden Party, an outdoor event celebrating nature, native plants, and art. It’s a perfect time to bring your friends and family to view these sculptures and take in the art and nature at Crystal Bridges!

Samantha Sigmon, Interpretation Manager at Crystal Bridges, has prepared this fascinating look into Haas’s sculptures, and their roots in the Italian Rennaisance.  –LD 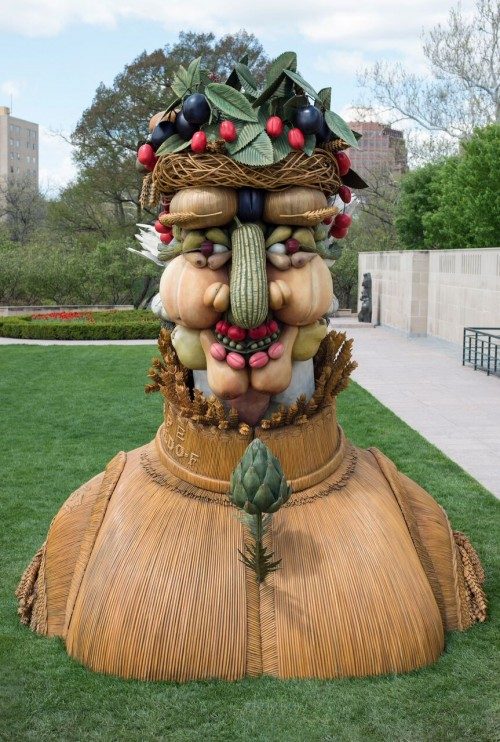 In a spectacular transformation that is typical of his work, American artist and filmmaker Philip Haas has created a group of large-scale fiberglass sculptures inspired by Giuseppe Arcimboldo’s Italian Renaissance paintings of the four seasons:  Spring, Summer, Autumn, and Winter. The colossal size of Haas’s sculptures accentuates the visual puzzle of plants, fruits, and vegetables as they form four human portraits, each representing an individual season. The result is at once earthy, fanciful, and exuberant— a commentary on Arcimboldo’s style and a work of art in its own right.

“Playing with Arcimboldo’s imagination and reinterpreting it allowed me to make the Renaissance contemporary and make contemporary art have a root in the history of art,” Haas stated. “To take Renaissance imagery and bring it into the physical world, bring it into the natural world, has been one of the great pleasures in the journey…to have the pieces continue to breathe.”

Arcimboldo’s original paintings, created in 1563, were composed in profile, so the ability to see the works from all sides is a completely new and unique viewing experience. In bringing Arcimboldo’s fascinating paintings into the three-dimensional natural world, Haas also gives viewers the opportunity to see them transform dependent on their changing environments. 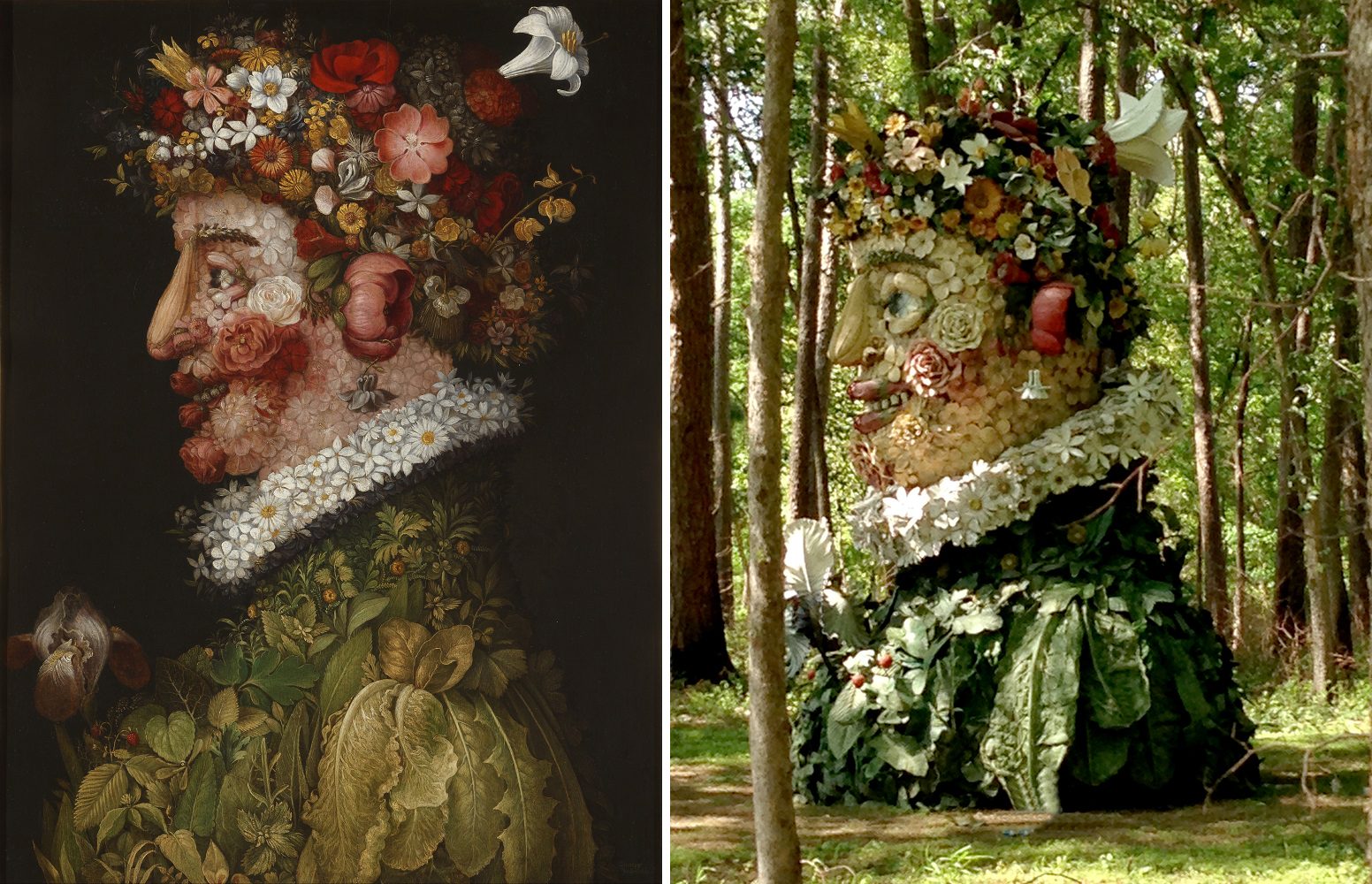 From Film to Sculpture: Haas’s Theatricality and Narrative

With a hand in many different art pursuits, Philip Haas’s journey toward the creation of The Four Seasons is not unlike that of a sixteenth-century Renaissance Man.

Born in San Francisco, Haas moved to Rome at 11 where he stayed until he graduated high school. Haas then earned a bachelor’s degree in folklore and mythology from Harvard and moved to the United Kingdom where he became interested in film.  He began by filming documentaries about artists and moved into historical dramas such as 1995’s Angels and Insects, which was nominated for an Academy Award and the Cannes Film Festival Palme d’Or. After directing several dramas, Haas left filmmaking to become a visual artist.

The move from directing movies to creating art inspired by master artworks began with a series of film installations at the Kimbell Art Museum titled Butchers, Dragons, Gods, and Skeletons, which became one of Time magazine’s top ten museum shows of 2009. Through moving images shown in specially created environments next to the artworks that inspired them, Haas interpreted and brought to life works of art in Kimbell’s permanent collection.

In marrying sculpture, painting, film, and architecture, Haas has created a contemporary visual vocabulary all his own and continued this pursuit through The Four Seasons. Not unlike directing a movie, the artist sees orchestrating large-scale installations and sculptures as directing art creation. “There’s a certain kind of scale and theatricality and narrative to these that’s inherent in the kind of movies I was making,” Haas said.

As an artist who has lived in Rome and became inspired by centuries-old master works, Haas’s life is a complement to Arcimboldo’s, an artist who reemerged as groundbreaking in the early twentieth century when rediscovered by the Surrealists. Salvador Dali, Marcel Duchamp, Max Ernst, Man Ray, and Rene Magritte were all inspired by his imaginative, fantastical compositions. Influential twentieth-century theorist Roland Barthes summed up this renewed fascination by stating, “Before one of Arcimboldo’s Composed Heads, I am led to not only say of it: I read, guess, discover, and understand, but also: I like, I don’t like. Uneasiness, fear, laughter, desire all enter the game.” Haas’s sculptures do this sentiment justice, unearthing and layering upon the original inspiration that led to the painting of The Four Seasons over 450 years ago.

Giuseppe Arcimboldo was born in 1527 to a noble family in Milan. His father, also a painter, was friends with a student of Leonardo Da Vinci and Arcimboldo grew up to greatly admire the famous painter, inventor, and thinker.  In 1562, after several commissions, Ferdinand I, King of Bohemia, requested that Arcimboldo come to the Habsburg Imperial Court where he painted the first series of the Four Seasons. Each season represented characteristics of the stages of life from youth to maturity. After the original series was created, the paintings were so popular that he made several of the same series to give to his patrons and their friends and allies.

Arcimboldo’s portraits of the four seasons were created to celebrate the imperial Habsburg court and its sovereigns as representatives of the benevolent power and harmonious nature of the reigning dynasty.

The Four Seasons reflects the objective of the Habsburg court—to create a glorious empire of the most distinguished, philosophical, scientific, and dignitary court of all time. To advance this reputation, the Habsburgs were known for their cabinets of curiosities, precursors to modern museums, which held a vast array of exotic specimens, natural anomalies, and treasures. As a long-time representative of the Habsburg court, Arcimboldo mixed classical fantasy, Renaissance style, and interest in the exotic with his own wit. He was not only a court painter, but a Renaissance man in Da Vinci fashion as an inventor, thinker, and creator.

Philip Haas’s The Four Seasons is on view from April 28 to September 11, 2016. See Spring, Summer, and Autumn along our Orchard Trail, Winter in our courtyard, and the models, or maquettes, for the sculptures in the Museum’s bridge gallery. 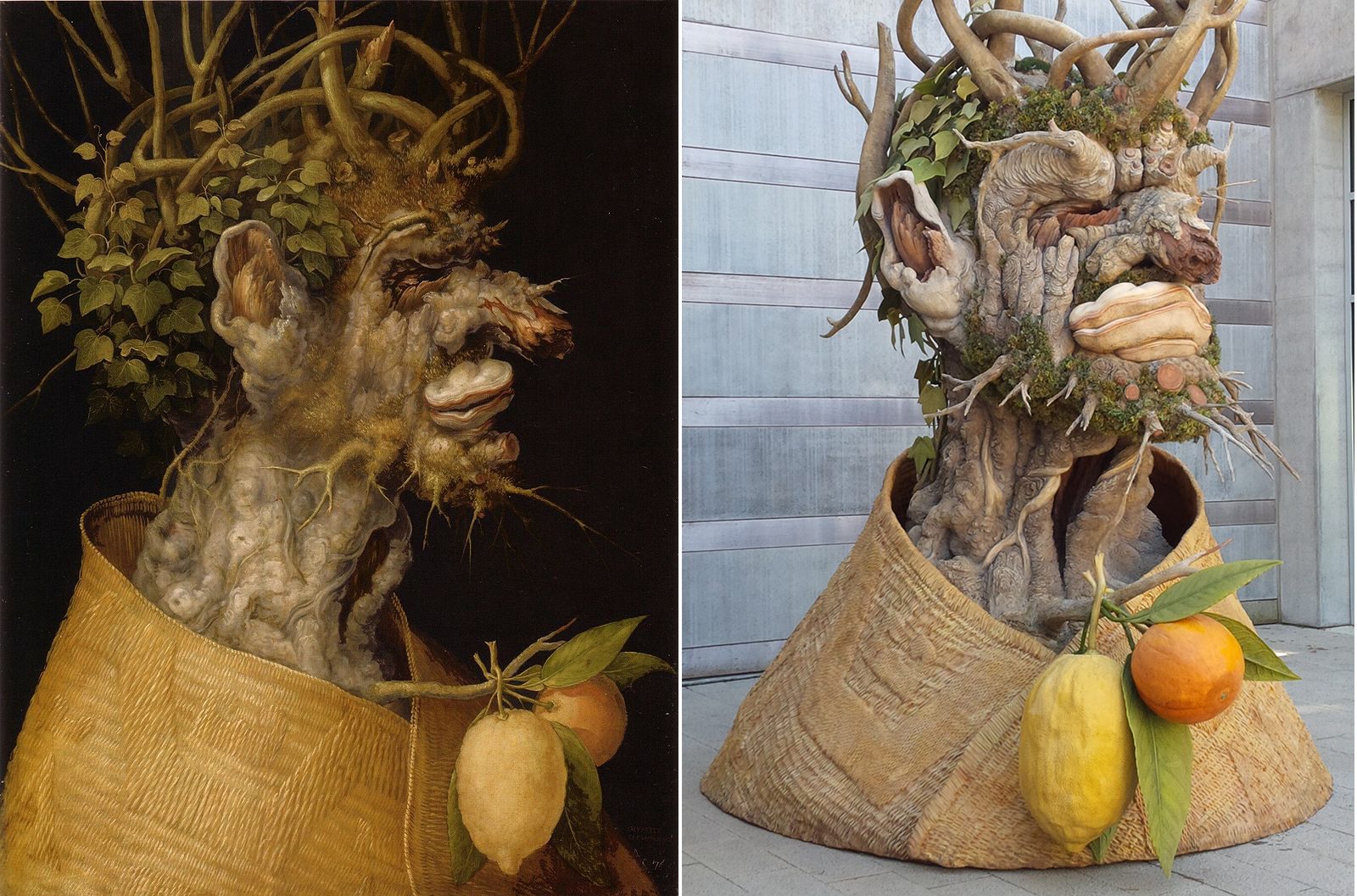