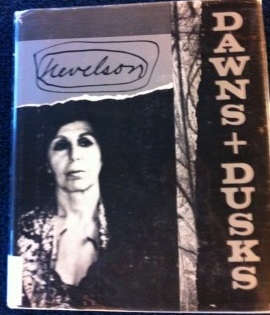 So how could an artist have triumphed in the face of such unreasonable prejudice?  “In Nevelson’s case, she was the most ferocious artist there was,” said Museum President Don Bacigalupi.  “She was the most determined, the most forceful, the most difficult. She just forced her way in. And so that was one way to do it, but not all women chose to or could take that route.” When the women’s movement began, Nevelson eschewed the title of “feminist.” But she also had no time for women who bowed to the male-dominated status quo.  “They were taught to look pretty and throw little handkerchiefs around but never to show that they had what it takes,” she said.  “Well, I didn’t recognize that, and I never never played that role. If you play that role, you don’t build an empire.” Nevelson didn’t find her true métier until she began working in wood after the beginning of WWII. She had been working in metal, and when steel became scarce due to the war, she began scavenging wood scraps.  She produced her first series of sculptures in wood at age 55. At age 60 Nevelson was asked to be part of an exhibition titled “16 Americans” at MOMA, along with young male artists such as Jasper Johns, Ellsworth Kelly, and Robert Rauschenberg: all under the age of 40. She had finally “arrived.” Nevelson was awarded the Edward MacDowell Medal in 1969. After the presentation ceremony, a woman in the audience asked Nevelson if she would have been satisfied with her life in art if  “it had turned out that after all you weren’t first-rate.” To this the artist answered: “It never occurred to me to be anything else.”