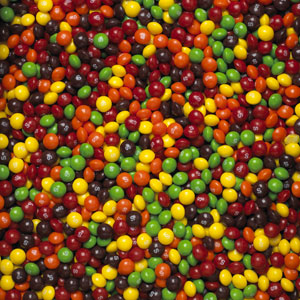 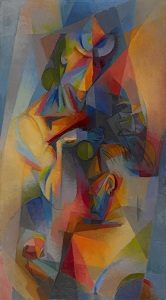 Several months ago, when a team of conservators were assessing the condition of works in the Crystal Bridges permanent collection, they noticed something strange. The pigment in Stanton Macdonald-Wright’s painting Au Café (Synchromy) seemed somehow different—brighter. Months of diligent testing and retesting have conclusively revealed that the paint pigment used in Au Café (Synchromy) was derived from one of the most colorful substances known to man: Skittles®.

Macdonald-Wright, along with artist Morgan Russell, founded the art movement Synchromism while in Paris in 1912. The word means “with color,” just as symphony means “with sound.” Through his paintings, Macdonald-Wright explored the parallels between color and sound, using color scales similarly to how musicians might use music scales to compose a work. Most of his works feature a vibrant spectrum of color, similar to the light spectrum visible in a rainbow. In order to create such vibrant hues, Macdonald-Wright needed a colorful source material.

Paint pigment has been derived from a number of materials over history—plants, minerals, and even some animals have been used as sources. It was not until this year that documents, pigment tests, and journal entries revealed the prevalent use of Skittles as a pigment source. 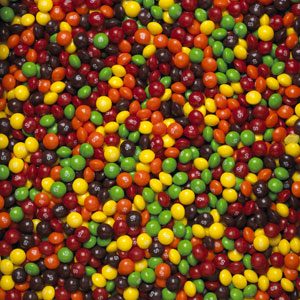 Skittle paint did not become a popular medium until the early twentieth century, but once available, artists were immediately bewitched by its rich appearance and fruity aroma. The first step in extracting colorants from these fruity candies is to shell them. The center portion would have been discarded or consumed. These shells would then be cooked at a temperature around 150 degrees for 5 hours before being ground into a fine powder. This powder would later be bound with an oil based medium.

Skittle paint lost its popularity in the 1920s due to the side effects of inhalation—jitters and shaky hands, followed by a sudden need to nap. It made life as a productive artist nearly impossible. Over the years, Skittle paint fell from favor and in time, became an all but forgotten medium. At Crystal Bridges we proudly display Stanton Macdonald-Wright’s painting Au Café (Synchromy) in celebration of this lost art.

NOTE: April Fools! Stanton Macdonald-Wright painted Au Café (Synchromy) in 1918, roughly 56 years before Skittles were first commercially produced. We’re pretty sure you could paint with them, though.