Soul of a Nation. Jae and Wadsworth Jarrell: Partners in Life and Art

Their works Revolutionary, by Wadsworth, and Revolutionary Suit, by Jae, are displayed together in Soul of a Nation, even though they were created three years apart and only indirectly relate to one another.  Revolutionary, a portrait of the social activist Angela Davis, is a screen print from the original acrylic painting done in 1972. In it, we see the bandolier of the Revolutionary Suit on Davis’s left shoulder, even though Davis never actually wore it.

Based on a photo of Davis taken during a speech made in 1970, Revolutionary is created from repeated words, phrases, and letters.  The words “love,” “rest,” “black,” “revolution,” “beautiful,” and “nation” burst from Davis’s head in Jarrell’s famous “coolade colors” (named for the brilliant tones of Kool-Aid).  Davis’s statement, “I have given my life in the struggle. If I have to lose my life, that is the way it will be,” runs down her left arm and chest. Repeated “B’s” represent “beautiful,” “blackness,” and “bad.”  Although the text can be hard to read and requires concentration to decipher, Jarrell said, “We clearly wrote on the canvas . . . exactly what we wanted you to know.” 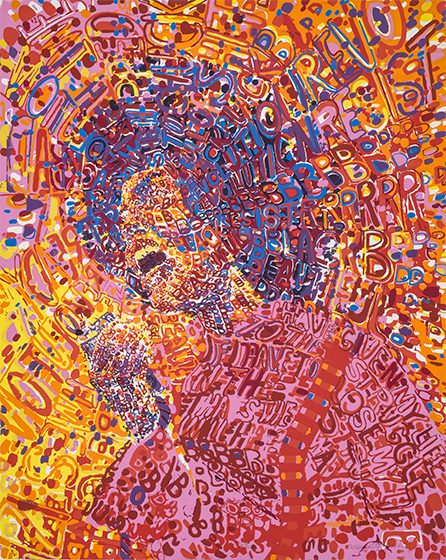 Nearby in the exhibition is Revolutionary Suit, a two-piece woman’s suit made of gray tweed in 1969 and remade in 2010.  In the fashion of the time, the skirt is a short, simple A-line, while the jacket is collarless with a scalloped edge and hidden closures. Accenting the curve of the scallop is a colorful suede bandolier filled with brightly painted wooden dowels which have a dual meaning: ammunition for a revolution, OR ammunition for creation—crayons or pastels an artist might use to create a statement about pride and self-determination.

Together, the artworks reference both the socio-political turbulence of the early 1970s as well as the revolutionary fashion sense in the movements for social change.

Both Jarrells are still working today, and both say the AfriCOBRA influence is still evident in their work, even though the group broke up in the late 1970s. Wadsworth put it best when he said, “. . . AfriCOBRA influence never leaves. It became a part of you, like breathing.”