Shouting to the World: An Interview with Randy Regier 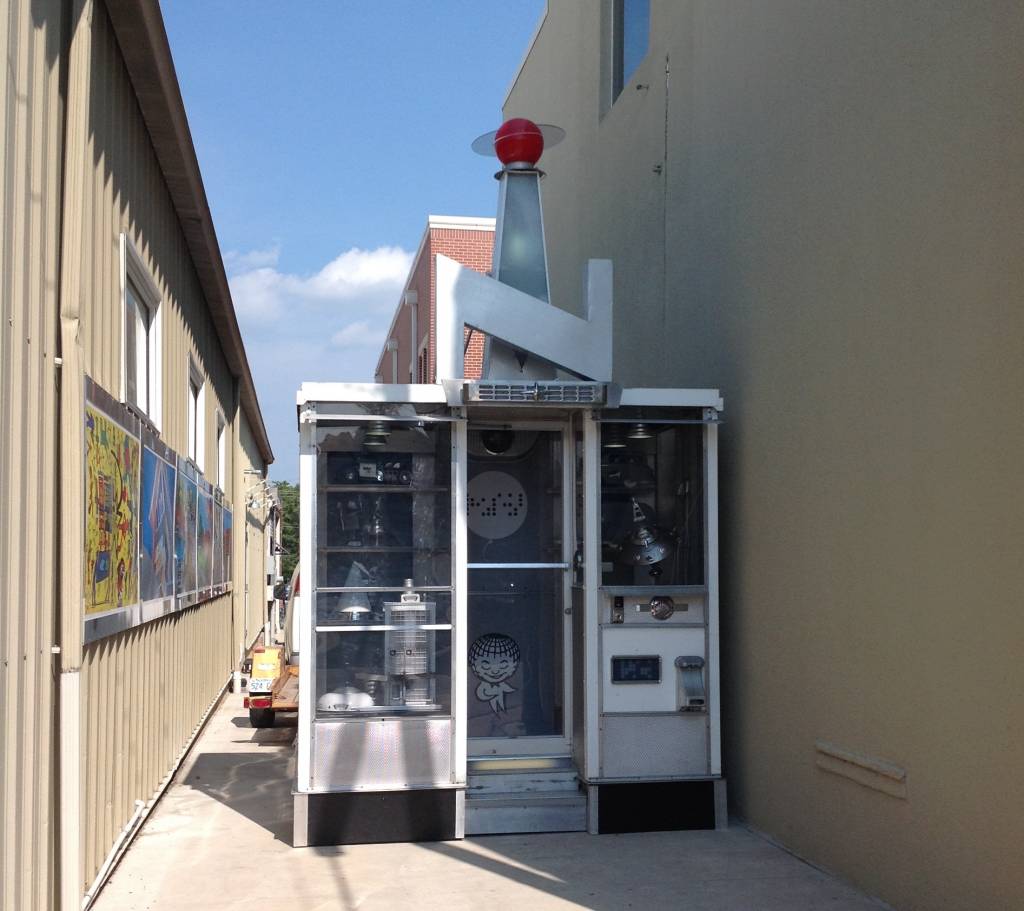 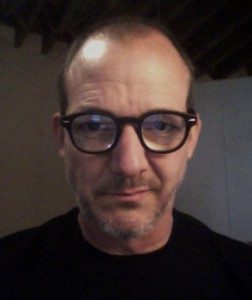 State of the Art artist Randy Regier is a talker. He’s also a tinkerer, a thinker,  a reader, a cynic, a seeker, and a comic. A conversation with him is an entertaining and thought-provoking ride that alternates between irreverent humor (like when he jokingly tells me he’s not going to become any “painter of light”) and touching, thoughtful moments (as he ruminates on his memories of his father, or on why books are important to his work). You couldn’t define or describe Randy in a few words.  His work, too, defies simple description. NuPenny’s Last Stand–Regier’s work that was installed last week in an alley near Bentonville’s Downtown Square–offers up no explanation as to its origin, purpose, history, or meaning. One day it just appears:  a diminutive toy store, looking for all the world as if it was transported there from the 1950s.  Those who stumble upon the work and take the time to investigate soon discover that it’s locked.  Through the windows, you can see the toys inside… but there’s no way to get to them. You are obliged to leave unsatisfied–yet piqued with a sense of mystery, frustration, nostalgia, maybe … even wonder. I asked Randy to allow us a few insights into this intriguing, baffling work.

LD:  The toys inside NuPenny—and the shop itself—have a sort of mid-century space-age look, why do you reference that time period? RR:  Part of it’s this: this is a quote I’ve come to more recently by Camus. “Possibly a man’s first object in life is to uncover, through the detour that is art, his first two or three loves, in whose presence his heart first opened.” I’m kind of a first-loves kind of guy. In the early 1970s, we lived on a small farm just outside of a small town in Oregon. No money. Period. My mom had 20 bucks a week for groceries. She’d drop me off at the Goodwill, and I’d have maybe a dollar, and I could buy whatever I could get at the Goodwill. So in my early formative years, I was buying toys from the 1940s and 50s. And those forms are all replicated in NuPenny because I fell in love with those toys. 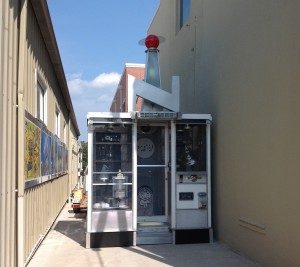 LD:  I understand that a lot of your work has a really elaborate backstory or fictitious history that you’ve developed. Is there a backstory for NuPenny? RR:  NuPenny didn’t start with narrative intentions. That said, each piece in NuPenny has a reference point to a poem, a song lyric, or a literary work that’s moved me, so it is about narrative, but it doesn’t all hang on one narrative thread. As NuPenny has been in the world, it’s developing its own narrative. It’s become much more like an urban myth because of the way it arrives and leaves again. I’ve always thought of it as something that’s linked to a classic Twilight Zone. I don’t really know why it’s here.  It doesn’t have to mean any particular thing, it’s enough to me that people wonder “What is this doing here?” No one goes into NuPenny. Even I don’t go in. It’s just like a dream. If you go in, if you break that plane, it’s not a dream anymore, you’re awake and it’s over. That’s why it’s locked. It’s also about desire.  I have this theory that I’m working through: the best thing about desire is just right before you get the thing that you desire. Once you break that plane it’s like … hmm. Well.  And on to the next thing. I’m really thinking much more now about beauty and about how more of that would be nice.

LD:  Where is NuPenny on that scale between beauty and that creepiness of the Twilight Zone? 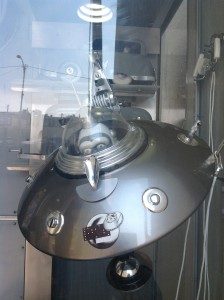 RR:  I don’t know that it’s beautiful. I find my most purpose when I’m working really hard, and when I look at NuPenny, I think “God that’s a lot of work.” And I know it wouldn’t be here if I didn’t really believe in it. I’ve made a few works that are really meaningful to me, but I don’t think I have anything that means as much as NuPenny does. Beauty is a really difficult term in contemporary art. In grad school, you’re not allowed to bring it up, or you just get hammered.  I’m wary of using the term “beauty.” But I think to try to make things that I see beauty in as their primary reason for being seems like a really good way to spend the next couple of years. I think NuPenny is beautiful in the sense that … I know people have approached it and they’ve been like ”Oh my!” Beauty does that. But a really bad car accident can have a similar effect. There’s something beautiful about those, too, there’s something wildly tragic and human. So by beauty I don’t necessarily mean the color yellow. It’s too early in this progression to know what I mean by beauty. The overarching conceit of NuPenny—since the beginning—is a poem by Stuart Kestenbaum called “Prayer in a Strip Mall in Bangor Maine.” It’s first person, it’s autobiographical. He goes into a bookstore. He’s walking behind this old man…and the man turns, and as he turns to the door, he looks at Stuart and he says,  “I love you”—only the man’s saying it to his wife, who’s going to another store. And Stuart says that’s the way it should be, love should be “spread throughout the world, shouted in our ears for free.” So when I built NuPenny I thought—I want people to have NuPenny for free, I don’t want them to owe me a debt of gratitude, or to shake my hand, or to have to read my artist statement. By free, I mean it’s just theirs and they can take it or they can leave it and if they want to interpret it as something, they ought to; and if they want to keep that as a definition of it, they ought to; and I should never be the one who says “no that’s not what it means.” So by building as much into it as possible, I thought there were as many avenues as possible for someone to have something from it that’s theirs.

The week after Thanksgiving and the stores are decked out For holiday shopping including a TJMAXX where what was once too expensive loses its value and attracts us, there is a store with a big yellow banner proclaiming GIANT BOOK SALE, a seasonal operation of remaindered books, which doesn’t mean that the books aren’t good, only that the great machinery of merchandising didn’t engage its gears in quite the right way and I buy two books of poetry and am leaving the store, the first snowstorm of the winter on the way and as I get to the glass double doors a bearded man with a cane is entering, he has been walking with a woman who is continuing on to another store and he has the look that could make him either eccentrically brilliant or just plain simple and as I open the door and he opens the other side he turns and says “I love you,” not to me but calling back to his friend who is departing, only he’s said it looking at me, closest to me, which is unintended love, random love, love that should be spread throughout the world, shouted in our ears for free.

You can find Randy Regier’s NuPenny’s Last Stand in an alley near the Bentonville Downtown Square. Watch the square for more State of the Art art installations in the weeks ahead!   Regier is one of 102 artists selected for the exhibition State of the Art: Discovering American Art Now, opening September 13 at Crystal Bridges.