Rock Ledge Trail and the Railroad that Wasn't 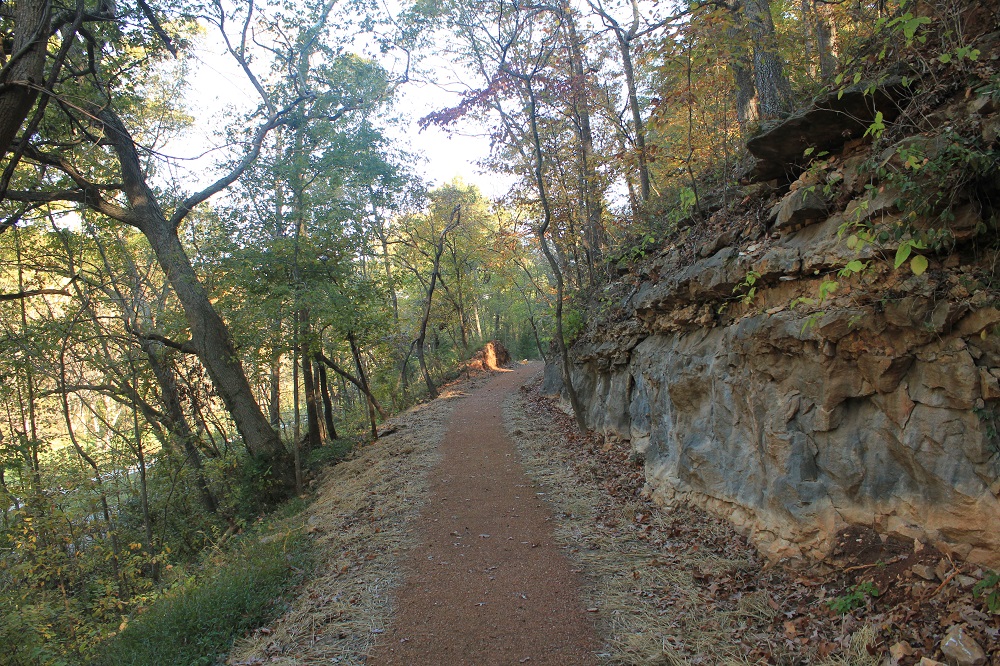 This view of the Rock Ledge Trail shows the tough layer of limestone the railroad had to cut through to level the grade. 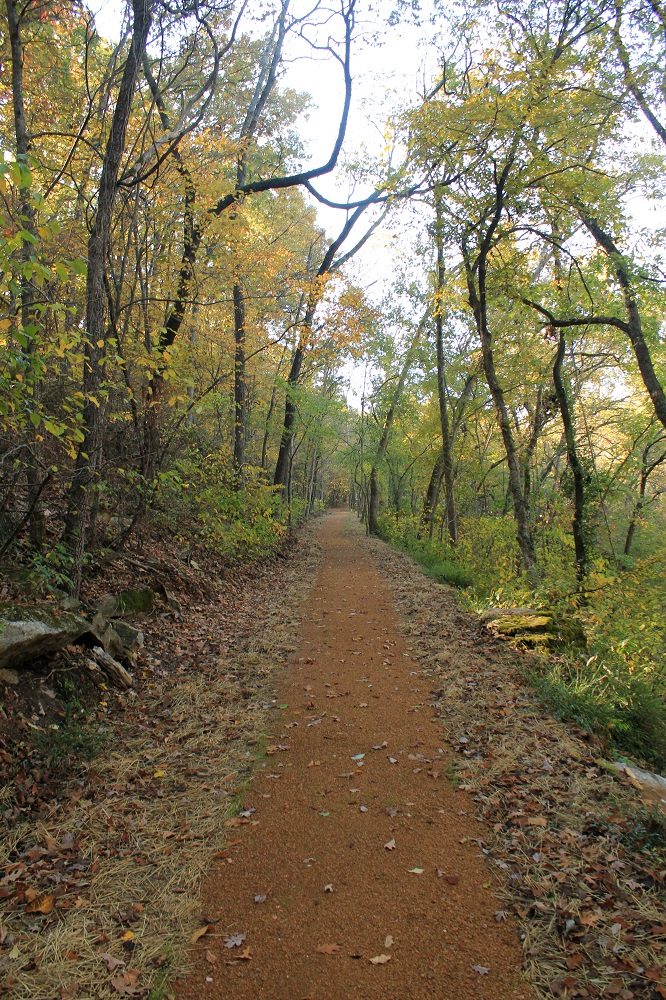 Of the six trails that ramble through Crystal Bridges’ grounds, Rock Ledge Trail has the most unusual history. It follows the path of a railroad bed that was cut through the area in 1891 but never completed. The project was largely forgotten in the subsequent years, and most local histories carry little or no record of it. The land itself, however, tells the tale in the form of a wide swath carved through the woods, with steep limestone cuts along its verge. The railroad bed passes through some of the rockiest landscape on the property and then vanishes just north of the Crystal Bridges site. Rock Ledge Trail is nearly all that’s left of the railroad that wasn’t.

The most difficult stretch of road bed was right at the beginning where the route cut across the rough, rocky terrain that is now the grounds of Crystal Bridges. “The first two miles of construction would cause the hearts of any other contractors to quake with fear,” the Sun declaimed. “But Watson and Schneider are not of that kind of metal and they only laughed at the stony, rough hillside work.” Trees were cut down, hilltops removed, and the grade leveled through the heavy forest. At one point 25 kegs of powder were reportedly required to blast through the limestone.
Despite these difficulties, Schneider was reported to have cut through some eleven miles to the Missouri border by mid-September, but then difficulties arose on the Missouri side. The businessmen in Pineville—whom the railroad had entrusted to arrange for right-of-way agreements through McDonald County—had failed to do so, and the work could not move forward. Though the newspapers reported that Schneider and his partners were negotiating with Missouri land-owners, work still had not recommenced by late December.
The subsidy notes expired in January, and the project languished through the winter and early spring. In March Watson and Schneider made arrangements with the Kansas City, Fort Smith and Southern Railroad to connect the Bentonville line with the KCFS&S line at Sulphur Springs, but it would require an infusion of $50,000 from the Bentonville business community.
The community voted to approve the necessary funds, but by late April, only $24,000 had actually been raised. The businessmen of Bentonville seem to have washed their hands of the project. Eventually Bentonville made rail connection to Kansas City through the Arkansas, Oklahoma and Western Railroad that ran from Rogers to Gravette, where it joined the Kansas City, Pittsburgh and Gulf line, but the KCB&SE line was abandoned.
What happened?  The newspapers seem to have dropped the topic entirely.  Tom Duggan, avocational Northwest Arkansas railroad historian, speculates that Schneider had underestimated the cost of construction through the obdurate limestone hills, and perhaps the railroad ran out of money before it ever actually reached the Missouri border as the newspapers claimed it had.  Without an influx of funding from the community, he believes Schneider simply dropped the project as a bad investment. 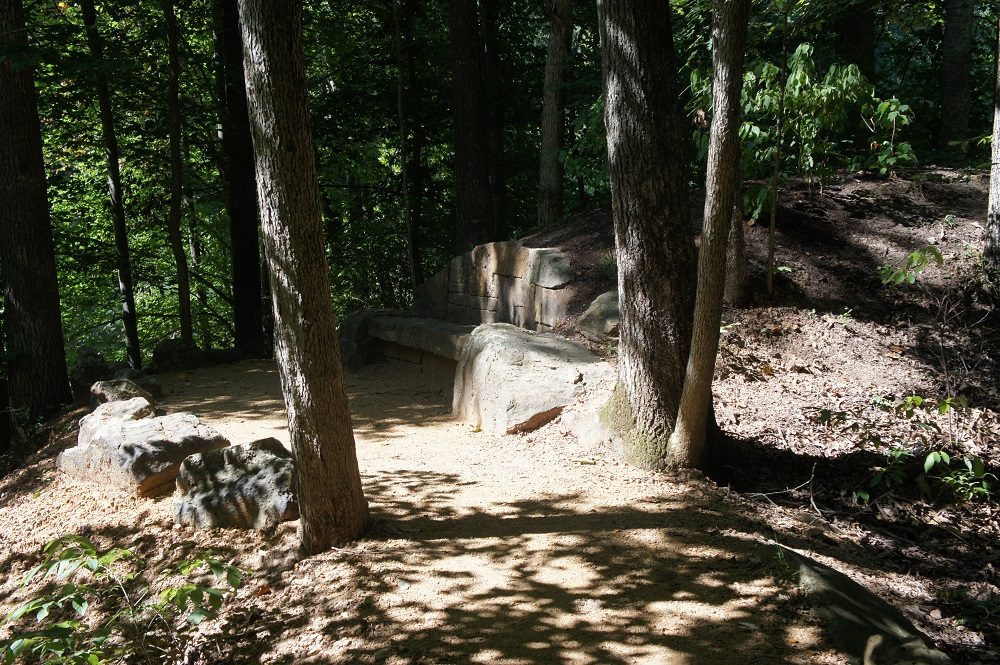 This bench on the Crystal Spring Trail was built into the end of an old bridge abutment for the Railroad that Wasn’t.

Over time, the forest encroached upon the road bed, but the limestone cuts remain as testament to the teams of men who so confidently blasted their way through the rock more than 120 years ago.  You can see the level, straight path as you walk the Rock Ledge Trail.   Further south, on the Crystal Spring Trail, there is another relic of the railroad.  On either side of the ravine where the water of Crystal spring drops down to join the main stream bed, the earthen abutments that were built to support a bridge can still be seen, if you know what you’re looking for. Scott Eccelston, Director of Facilities and Grounds, had a stone bench built into the end of the northern abutment, so guests can rest and look out over the spring.