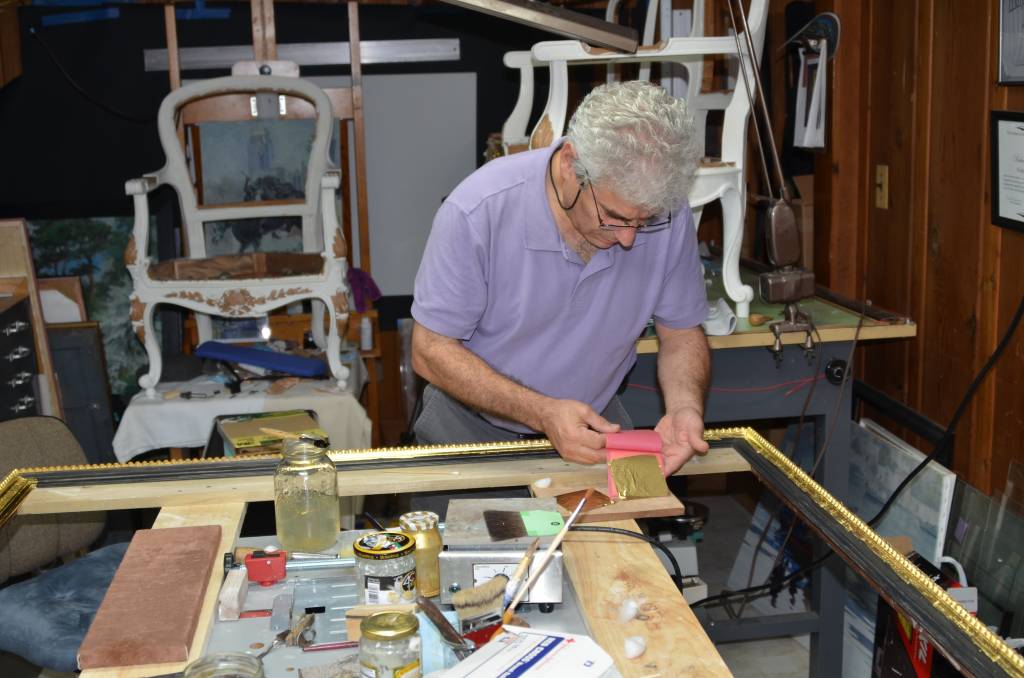 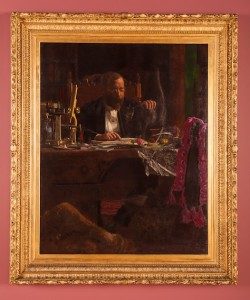 Thomas Eakins’s Professor Benjamin Howard Rand is a centerpiece of Crystal Bridges’ Late Nineteenth Century Art Gallery.  Its large, beautiful, and ornate frame is often noticed and remarked upon by Museum visitors. This frame was original to the work, but it had been damaged over time, and was covered in several layers of gilding.  Curators felt that, to present the work in its best possible way, the frame would have to undergo intensive conservation.

Bringing the 75- by 63-inch frame back to its former glory was a process that required more than 550 hours of work by a professional conservator. Behrooz Salimnejad has been a frame, furniture, and wooden artifacts conservator for nearly 50 years, and is currently Conservator of Furniture and Woodwork at the Philadelphia Museum of Art. He also carried out extensive conservation on the frame on another famous Eakins painting: The Gross Clinic, now in the collection of the Philadelphia Museum of Art and the Pennsylvania Academy of Fine Arts.

In order to return the frame to its original finish, Salimnejad had first to determine what that finish had been, and what was covering it up. “Conservation is sort of a forensic science more than an art,” he said; and explained the painstaking process required. Several small samples were taken from different locations on the frame. The locations are chosen as being most likely to still retain some of the original finish, since the early restorers would likely have removed most of the gilding before refinishing the frame. 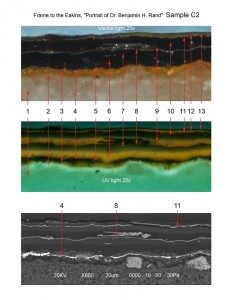 Scanning electron microscope images showing the layers of gilding and shellac on the original frame.

Microscopic examination of cross-sections of these samples revealed that there was an original layer of gold leaf under two subsequent layers of “Dutch metal,” or bronze leaf finish. An electron microscope was then used for positive identification of the metal layers. Using both visible and ultraviolet light, further analysis was carried out for characterization of the binding media and other components in the layers. “When viewed under ultraviolet light, different materials have characteristic autofluorescence colors. This helps to identify them,” Salimnejad explained. “Shellac’s autofluorescence is orange, animal glue is whitish, lacquer is yellowish/greenish. Oils do not autoflouresce, they show dark.”

This examination indicated that the original gold leaf was applied using a “water gilding” process that used rabbit skin glue as a binder for the gold leaf. Gilding with this process was labor-intensive, but provided a higher luster than the alternative “oil gilding” process, which used a combination of oils and resins. Water gilding also allowed for pieces of the frame to be burnished to a high shine using polished agate. There was evidence that some of the decorations on the original—beads, acorns, and several other areas—had been burnished.

Having established the nature of the original finish stratigraphy, Salimnejad then carefully removed the two layers of bronze leaf, preserving the original gold leaf wherever it was found. Along the way, several repairs and conservation measures were made, including structural repairs to loose joints and replacement of missing ornaments on the frame’s surface. This he did by repairing the damaged area with a gesso filler and then carving it by hand to match other parts of the frame. 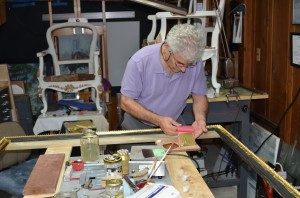 Conservator Behrooz Salimnejad, regilding the frame to the Eakins portrait.

The restored frame was then sized with rabbit skin glue, to protect the historical surface from the restoration layer, and re-gilded. This created a bright gold surface that, as Salimnejad said, “hurt your eyes.”

“Since this painting is fairly dark you want to make sure the frame is not too bright because it interferes with the painting,” he explained. To tone down the frame’s brightness, a patina needed to be applied over the gold.

First, a layer of shellac was laid down over the new gilding to protect it and allow future conservators to safely remove the patina should they ever wish to. Then an oil-based patina was used to darken the surface to match that of other nineteenth-century frames the conservator had chosen as a benchmark. Finally, the frame was complete, ready to be reunited with its original artwork, and displayed in the Museum’s gallery.

Though most guests to Crystal Bridges will never be aware of the intense conservation work performed on the frame when they are viewing Professor Benjamin Howard Rand, many are sure to notice and enjoy its rich, ornate beauty.