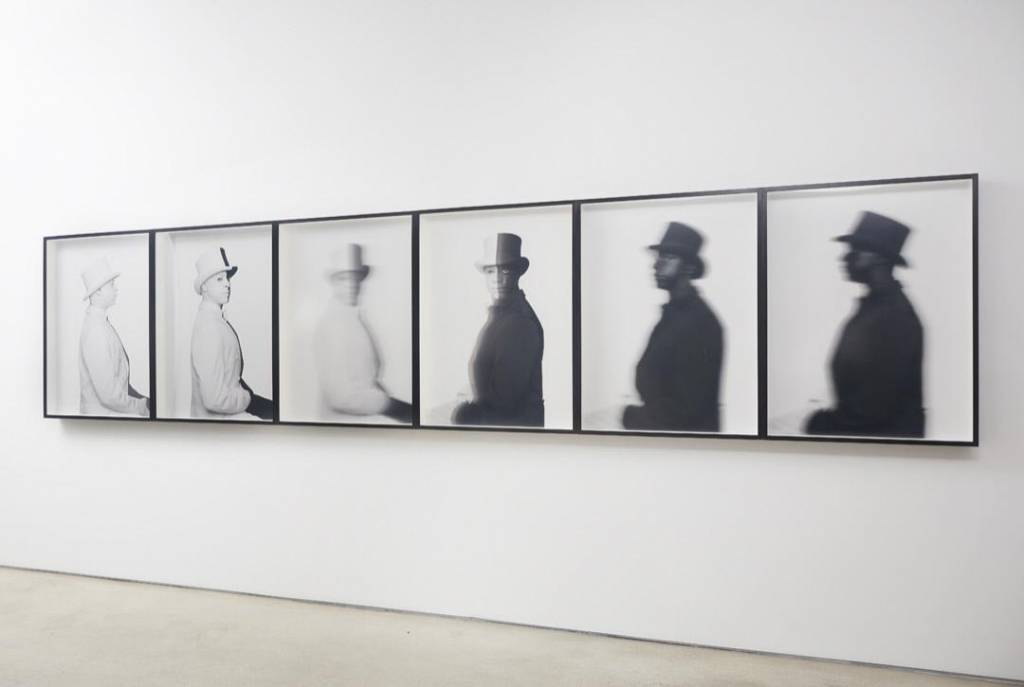 This day is remembered as Juneteenth Independence Day or Freedom Day across the country. At Crystal Bridges, we celebrate the works of African American artists. Take some time to explore some modern and contemporary artworks in the collection that focus on themes of Black identity in the United States. Painted in a colorful and mildly distorted style, The Garbage Man vividly evokes the racial and economic injustices of the Jim Crow era in the United States.

John Biggers’s personal life experiences heavily influenced his work. In a career that spanned over 50 years, he drew inspiration from the people in his life and his community. The Garbage Man, painted in 1944 at age 20 while Biggers was serving in the US Navy, reflects an example of the artist’s early work that focused primarily on racial inequities. He later earned his PhD in art education and founded the art program at what is now Texas Southern University in Houston. 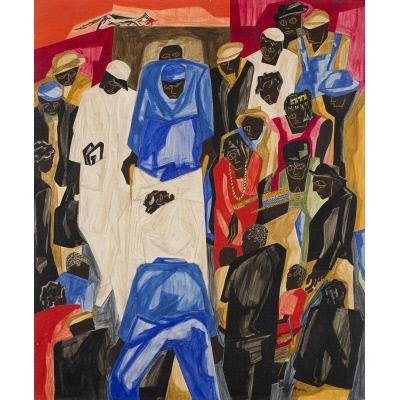 In the 1940s, the Harlem Hospital was the only facility in New York City that admitted black patients; consequently, ailing blacks waited significantly longer to get medical treatment than did their white counterparts. In this Harlem street scene, ambulance attendants lift a stretcher carrying an ailing figure covered in white sheets. A paramedic stands by, monitoring the victim. Surrounding this trio is a densely packed crowd of spectators, whose downcast eyes and sad expressions suggest that they are not anonymous onlookers but rather a close-knit community of neighbors, friends, and family. 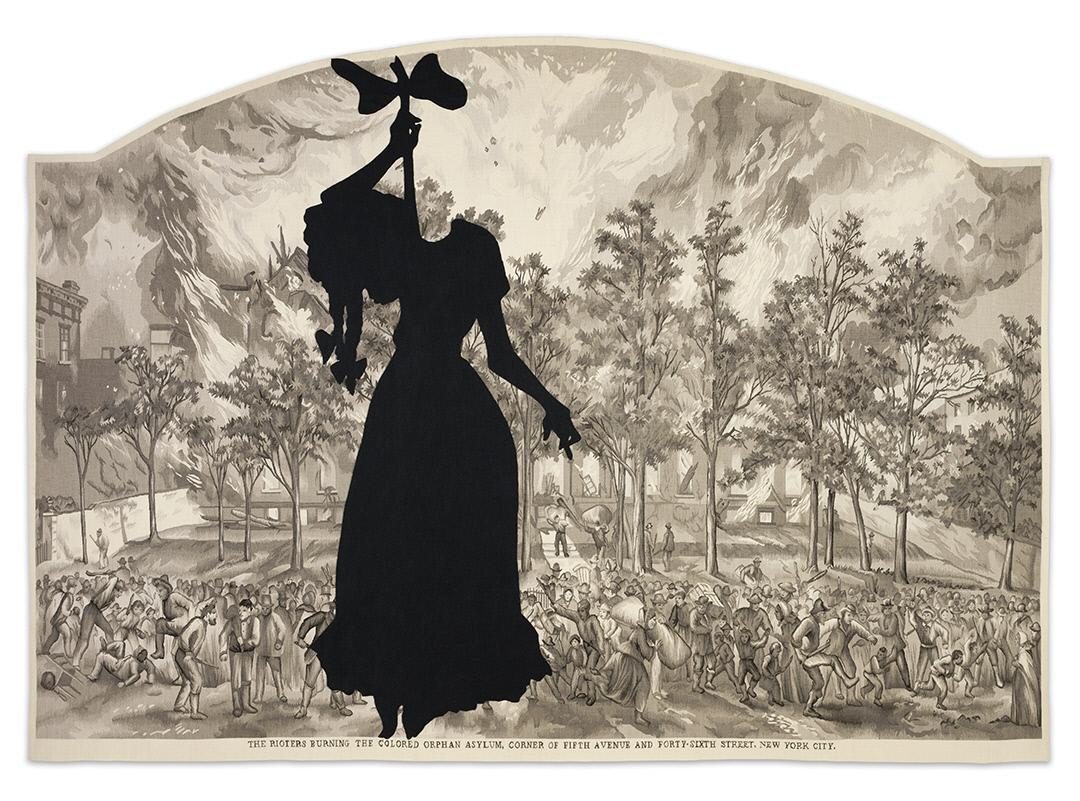 In this tapestry, Kara Walker reproduces an etching from an 1863 issue of the newspaper Harper’s Weekly that documents the burning of a “colored orphan asylum.” Infuriated by newly imposed draft requirements during the Civil War, a mob of New Yorkers took to the streets, attacking both black and white innocents. The silhouette of the hanged woman over the tapestry grabs the attention of the viewer. Walker’s usage of this traditionally Victorian art form to create irony in how African Americans were treated.

Created during the 1960s as part of a suite of works she referred to as her “attitude paintings,” The Reader equally balanced Amos’s interest in abstraction and the figure. These early works allowed her to explore the significance of color as it relates to the black female body, a subject that went on to become a primary focus of her artmaking in future decades. Marshall contrasts the tidy scene, dominated by red, white, and blue, with deep black paint and minimal shading on the figures. Here, he emphasizes the blackness of his subjects in an art world that notably lacks images of African Americans. Our Town further evokes Thornton Wilder’s 1938 play of the same title, posing the question: for whom does this American ideal really exist? 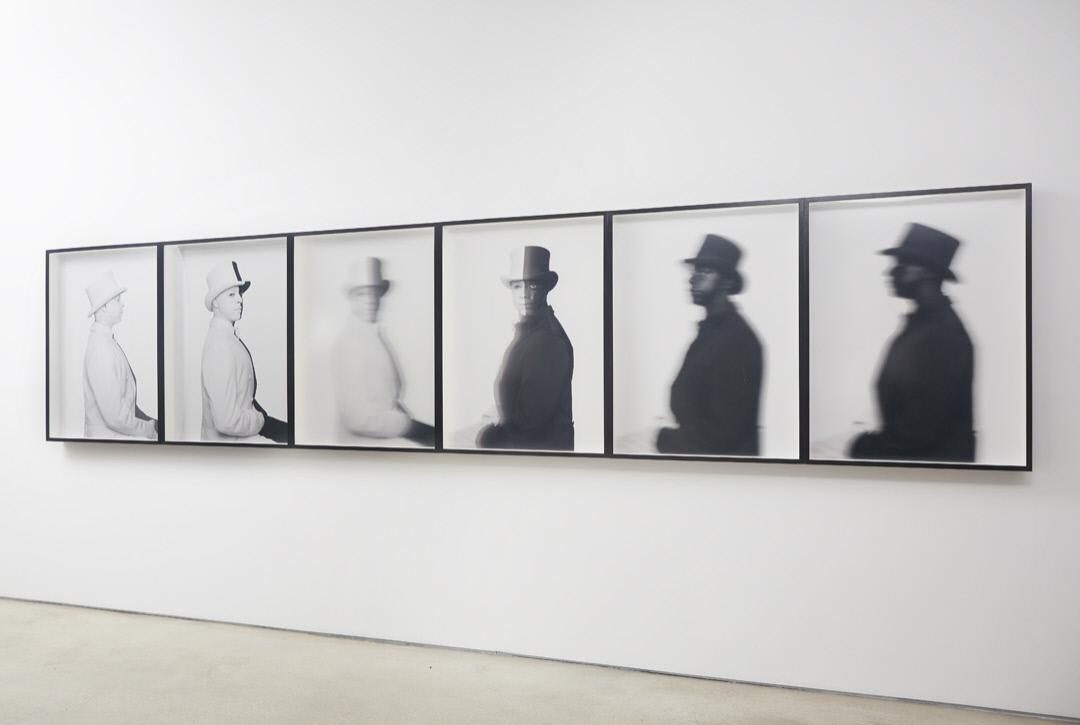 Zero Hour by contemporary artist Hank Willis Thomas takes viewers on a journey of vision and struggle to find contentment with conflict. At the same time that minstrelsy, an American form of entertainment in the nineteenth and early twentieth centuries where white performers would put on shoe polish on their faces and act out scenes of black life filled with stereotypes, many black Americans still struggled to be seen as human beings and citizens. The figure in the photographs is dressed in a top hat and coattails, a similar style of dress. Contemporary artists like Thomas utilize images of how black Americans have been portrayed to raise questions of identity and representation in American media. 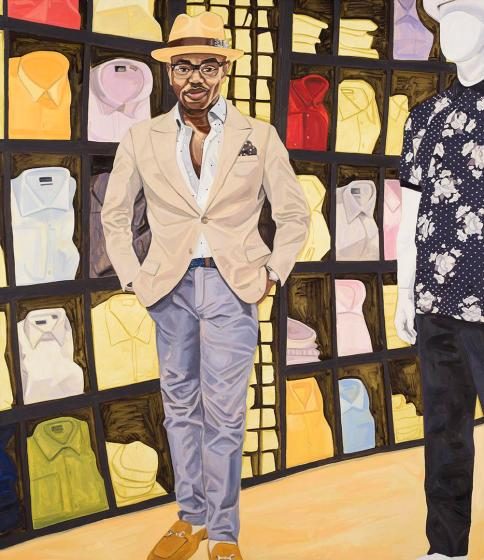 The subject of Jordan Casteel’s Ourlando is a suit shop owner on 125th Street in Harlem. Casteel’s main subjects are black men. Her images resist stereotypes and false narratives about black men in the United States, as her paintings stem from real-life encounters.

The sitters in Casteel’s paintings are people she has met in her neighborhood and she often photographs them at the site where they met. Building on the intimacy established during the impromptu photoshoot and conversation, Casteel then uses those reference photographs to create a painting that simulates the connection she first felt with her subjects.