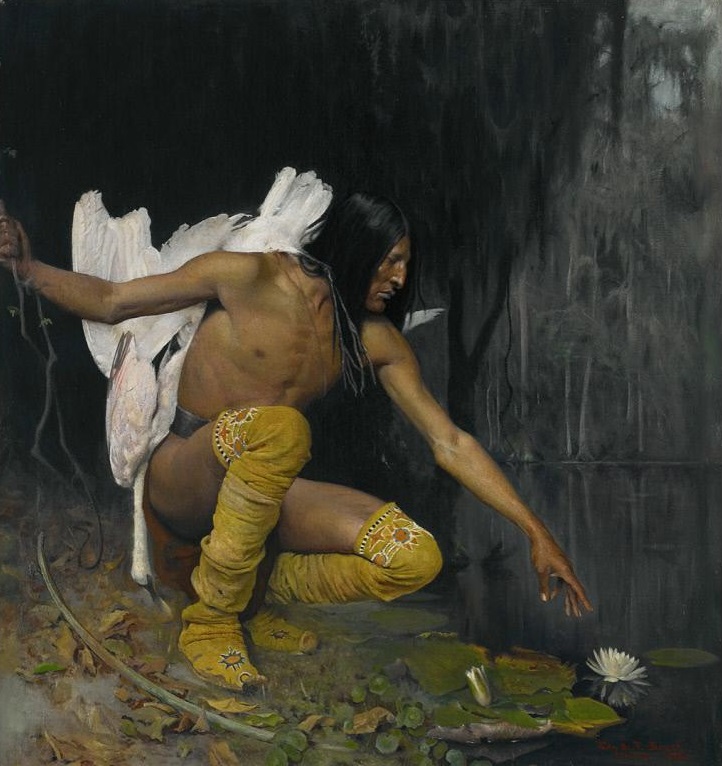 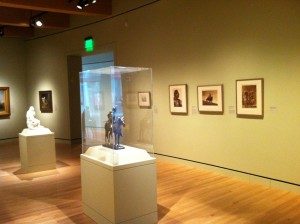 A view of “Changing Perspectives of Native Americans” on view now.

Changing Perspectives of Native Americans is a focus exhibition currently on view in the Museum’s Early Nineteenth-Century Art Gallery. The artworks featured—created by European and Euro-American artists—reflect shifting attitudes toward Native Americans. The very earliest images record characteristics and customs of the native residents of North America. Later, in the wake of controversial laws such as the Indian Relocation Act (1830), the ethnographic and documentary emphasis grew into more romantic renderings. 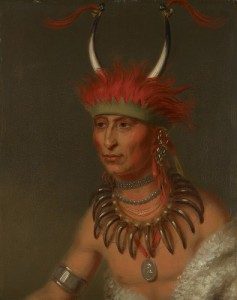 Two of the early documentary images in the exhibition are portraits of Native American leaders created by Charles Bird King in the early 1800s.  King painted portraits of more than 100 Native Americans who visited Washington DC on diplomatic missions between 1821 and 1842.  He was careful to depict the details of their dress and rendered these leaders’ portraits with all the dignity he might have afforded a European leader.  Some, such as Ottoe Half Chief, are pictured in Native regalia. Others, such as Cherokee politician John Ridge,  in European dress. You can read more about King’s portraits of Native leaders here.

The ways in which Native Americans figured into nineteenth century American art were largely prescribed by precedent. The idea of the Noble Savage, one who lived in nature beyond civilization’s corrupting influences, emerged much earlier. For example, French philosopher Jean-Jacques Rousseau (1712-1778) drew upon the concept to highlight the corruptions of modern European civilization. Americans also embraced the concept when defining their new nation. Afforded classical attributes inspired by Greek and Roman sculpture, the “savage” was not only ennobled, but also anchored as America’s ancient and wild counterpart to Europe’s founding civilizations. 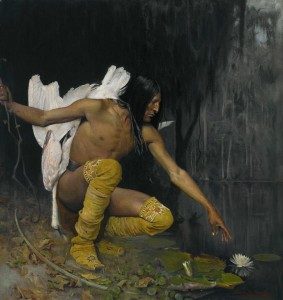 George de Forest Brush, “The Indian and the Lily,” 1887, oil on canvas

George de Forest Brush’s Indian and the Lily is a good example of this romantic ideal.  The Native American hunter, probably modeled on members of the Apache tribe Brush viewed in Florida in the spring of 1887, is depicted as a gentle and sensitive soul who lays down his bow to collect a water lily:  a symbol of purity in the language of flowers popular during the Victorian era.  This romantic perspective drew lines of commonality between the Native peoples and the Angle-Europeans, yet still set the Native Americans apart as uncivilized.  A critic of the time wrote of that the action of the subject “humanizes the savage, and it humanizes us, to regard him as a brother.”

By the late nineteenth century, tribes across the country had been moved to reservations or were forced to attend boarding schools for the purpose of cultural and religious assimilation. Coupled with this change, artists responded with a longing for the past and tried to recapture what they considered the exotic and romantic lifestyles of Native Americans, aiming to preserve the picturesque images of a past untouched by the present. 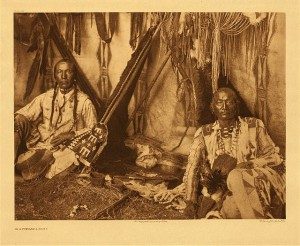 Edward Curtis
“In a Piegan lodge”

This can be seen in the photographs of Edward Curtis, who often staged or edited his photos to create an illusion of Native American culture that was no longer current, such as in this photo of a Piegan lodge, in which Curtis removed the image of an alarm clock which was present in the original. More on Curtis here.

On your next visit to Crystal Bridges, be sure to stop by the side-room in the Early Nineteenth-Century Art Gallery to enjoy this special focus exhibition.  It will be on view through August. Nearby, you can also enjoy some wonderful mid-nineteenth-century advertising prints by George Catlin depicting the artist showing off his Colt firearms while engaged in various hunting activities with Native American tribesmen.