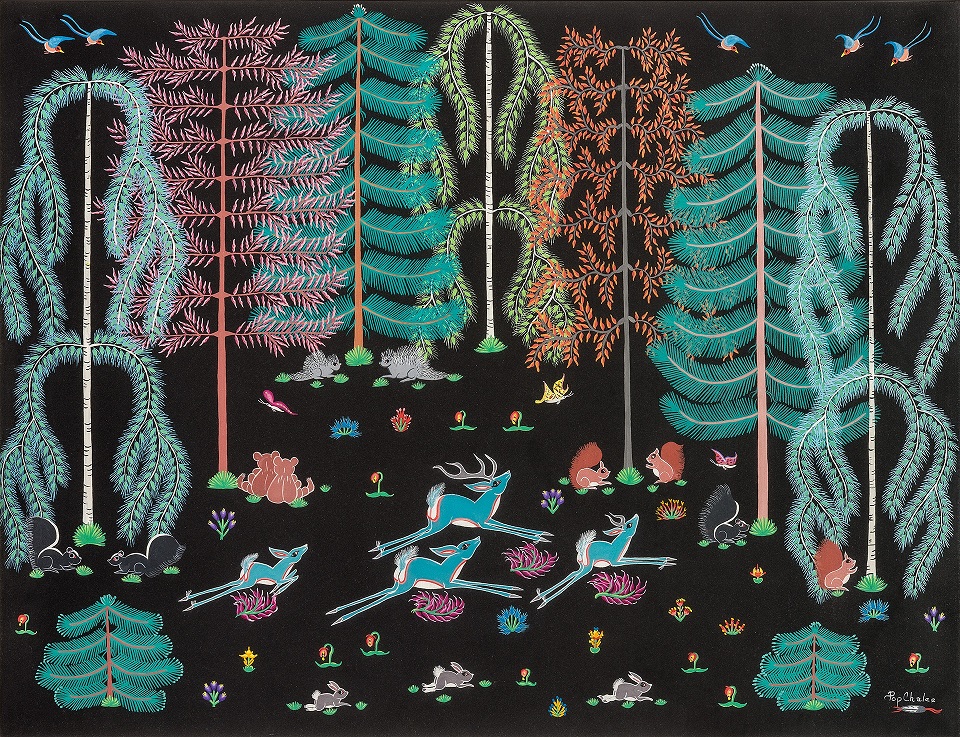 Crystal Bridges is excited to announce the acquisition of 31 modern and contemporary artworks by 25 Native American artists from the Bruce Hartman collection in Kansas City, Missouri. The collection of 30 paintings and one sculpture date from the 1920s to 2000 and include artworks representative of San Ildefonso self-taught artists; the Santa Fe Indian School; Oklahoma artists, including the Kiowa Five/Six; modern artists embracing abstraction; and contemporary works. These artworks help expand our understanding of modern American art.

The San Ildefonso self-taught artists are often considered the beginning of Modern Pueblo painters (about 1900 into the 1930s). They worked with American anthropologist Edgar Lee Hewett, who employed the artists to document pottery designs during excavation. Hewett recognized the artists’ skills and the marketability of their work to white patrons and encouraged the artists to paint ethnographic subjects such as Pueblo dances. Stylistically the artists often negate a horizon line and intentionally omit spatial depth while emphasizing bright, outlined figures. 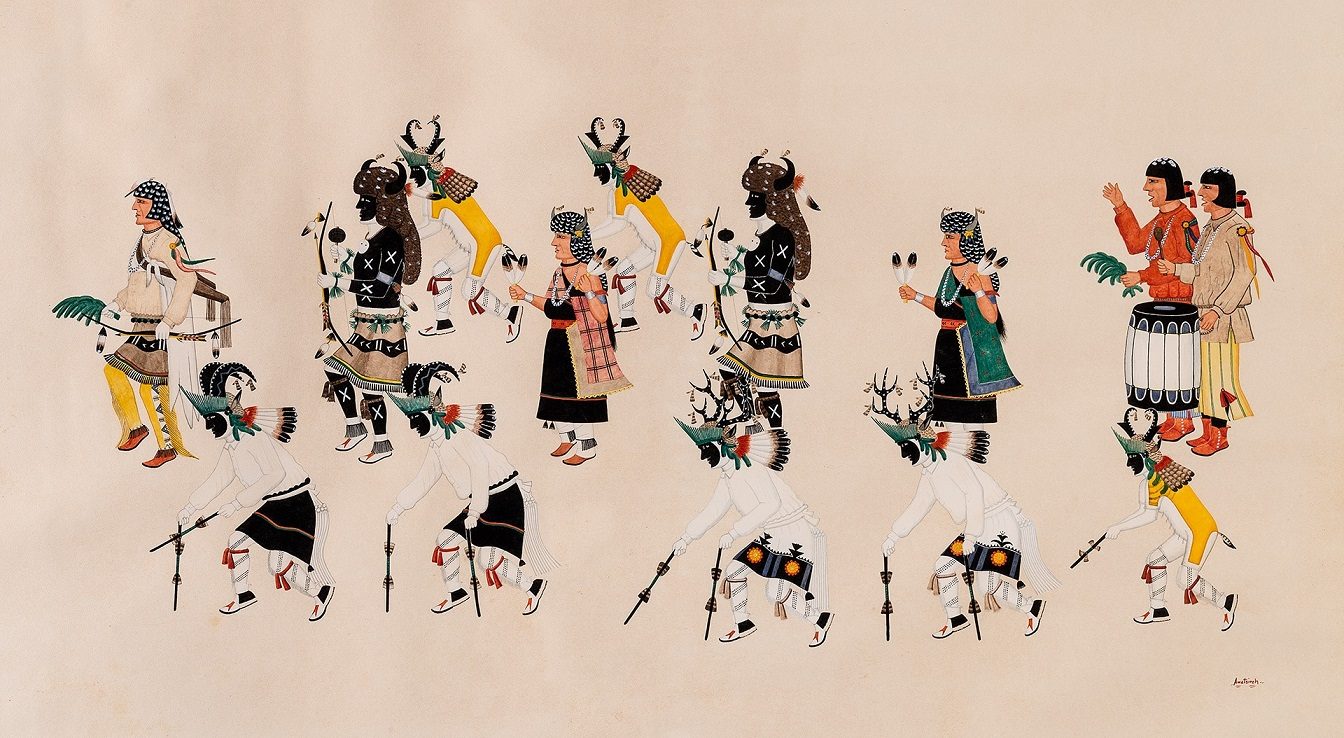 In 1932, American art instructor Dorothy Dunn established The Studio School at the Federal government-run Santa Fe Indian School. Dunn embraced the so-called “flat-style” made popular by the San Ildefonso artists and encouraged her students to create works that depicted their communities and home life. Students of The Studio School eventually developed more narrative scenes with individual style. Pop Chalee, for example, utilized an unconventional approach to space and imaginative colors to yield a fantastical atmosphere in Enchanted Forest (below). 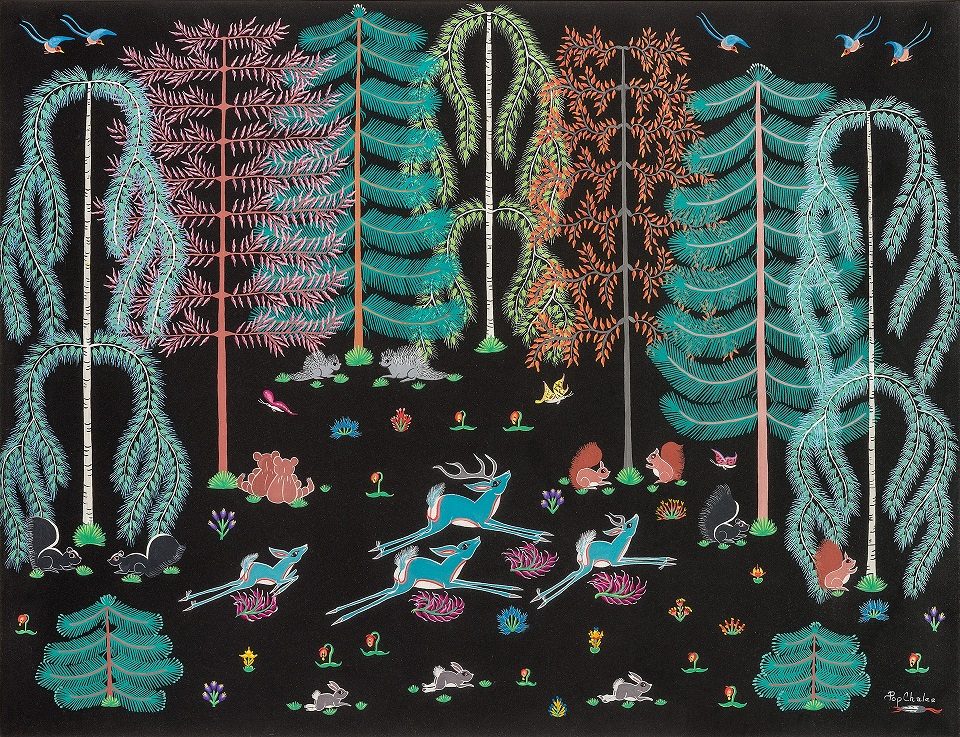 Many of these artists, including Harrison Begay, received national and international acclaim and were exhibited in New York at the Museum of Modern Art and in Europe (including the 1932 Venice Biennale). Pablita Velarde is arguably one of the most successful artists who came out of The Studio School, where she was the first full-time female student. Velarde was funded by the Works Progress Administration (WPA) to paint murals throughout the United States. Her use of earth-based pigments, subject matter, and color palette takes easel painting back to its historical basis of kiva murals, an important part of Pueblo culture. 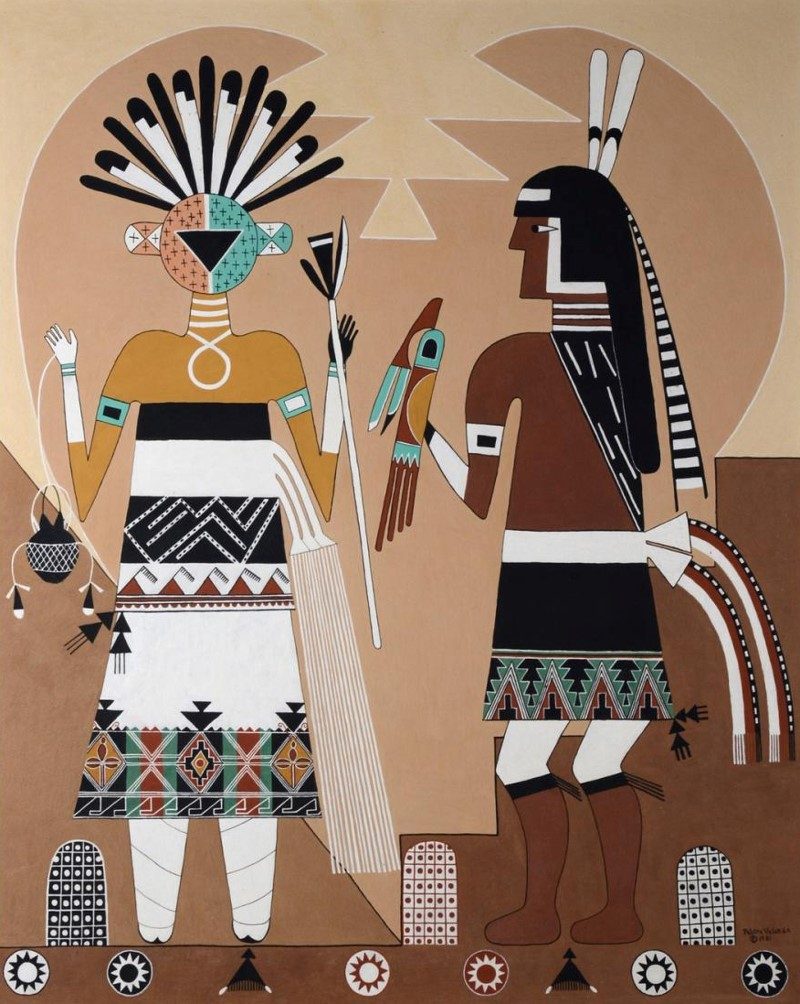 At the same time as The Studio School was gaining recognition, artists from tribes in what is now known as Oklahoma began painting scenes of everyday life. In the 1920s and ‘30s, the Kiowa Five/Six artists were a group of artists who developed a distinctive style inspired by Plains hide drawing and ledger art. Art Deco also influenced other artists in the region, as evident in Woody Crumbo’s Peyote Bird (below). 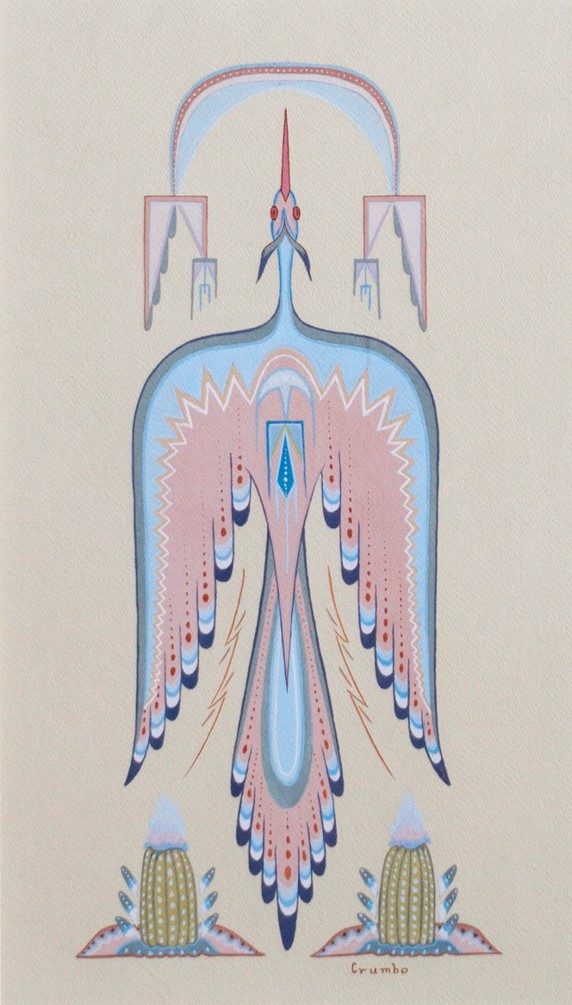 By the mid-twentieth century, artists continued to emphasize individual styles. Some, like George Morrison, intersected with European and American painting broadly when he embraced Abstract Expressionism and moved to New York to be part of the movement. Harry Fonseca explored Native American history, storytelling, and daily life. 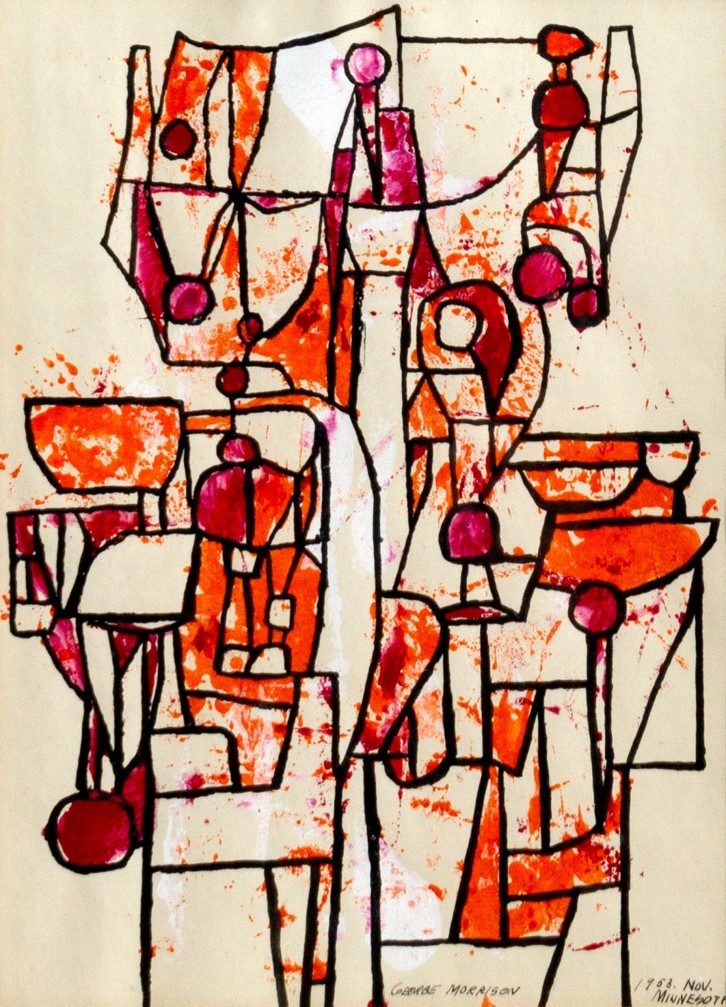 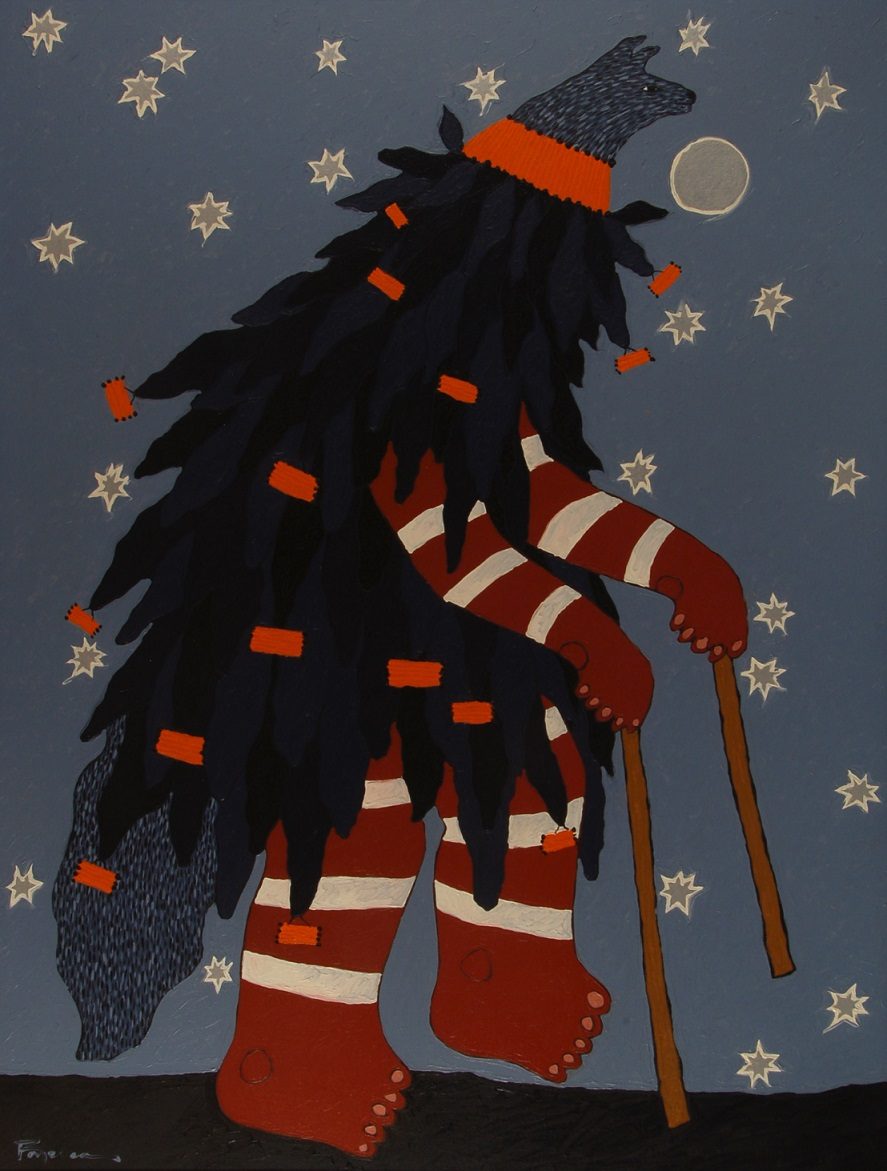 A full list of the acquisitions can be found here:

These artworks will be seen in the upcoming focus exhibition Companion Species, which will begin at Crystal Bridges on November 21.

These artworks will be installed throughout the Modern and Contemporary Art Galleries this fall.

This post was written by Mindy N. Besaw, curator, American art, and director of fellowships and research.