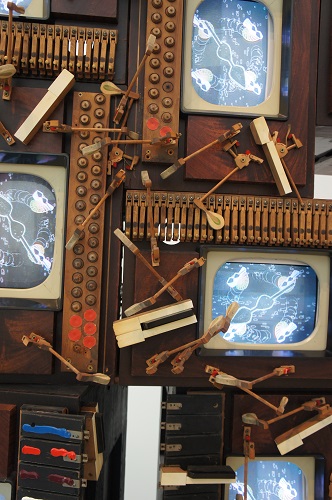 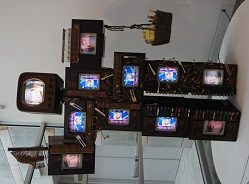 The month of July marks the 82nd birthday anniversary of Nam June Paik (1932-2006), one of the most significant “global artists” in Crystal Bridges’ collection. A major work by Paik, his video sculpture John Cage Robot II (1995) is on view in the lower entrance to the North Exhibition Gallery from Walker Landing.

Paik was not only a global artist – or “global visionary” as Elizabeth Broun, The Margaret and Terry Stent Director at the Smithsonian American Art Museum called him [1], he was also one of the most influential artists of the late twentieth century. Known as the “Father of Video Art,” Paik was instrumental in elevating video art, sound art, and performance art as fine art. This internationally recognized artist was born on July 20, 1932, in Seoul, South Korea. In 1950, during the Korean War, Paik’s family first fled to Hong Kong, and then to Japan where he studied music and art history at the University of Tokyo. There he explored avant-garde music and wrote his thesis on composer Arnold Schönberg. The years he spent in Japan were important to the development of his career. There he had access to innovative technology through a friend at Sony. At that time the company was interested in making its products available to leading artists[2].  In 1957, Paik moved to Germany, which was a known center for experimental music. He investigated the possibilities of contemporary music and art—first at the University of Munich, and then at the international Summer Courses for New Music in Darmstadt, where he met contemporary composers Karlheinz Stockhausen and John Cage. In Germany, Paik also became a member of the Fluxus art movement and collaborated with its founder, George Maciunas, as well as artists Joseph Beuys and Wolf Vostell. Through Cage Paik met Dada artist Marcel Duchamp, with whom he shared an interest in the use of found objects and questioning the rules of traditional art.

While these composers and artists greatly inspired Paik,John Cage was the main influence for his performances and compositions. They became close friends and frequent collaborators, and Paik dedicated several of his works to Cage.  Paik’s move to New York in 1964 further established his role as an internationally known video artist. With the economy booming in the US, modern consumer electronics were widely available (more than 90% of all American households owned a TV set). Transatlantic communication satellites transmitted color television signals, phone calls, and faxed images across the ocean; IBM offered its first mass-produced computer operating system (OS/360), and electronic media increasingly dominated daily life (TV became the main source of news in the US). 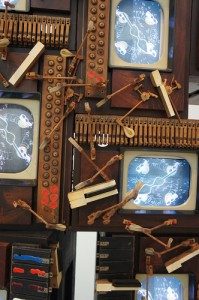 Paik. as a true visionary. was probably the first to use the phrase “electronic superhighway” in connection with telecommunication: in his 1974 proposal Media Planning for the Postindustrial Society – The 21st Century is now only 26 years away to the Rockefeller Foundation,[3] the artist explained his farsighted plans for digital communication—some twenty years before the “information superhighway“ became a widely discussed political issue during the Clinton administration. In 1995 he created Electronic Superhighway, Continental U.S. (Smithsonian Art Museum), an enormous installation consisting of 336 televisions on a scaffold covered with some 600 linear feet of neon tubes shaped as a map of the United States. Fifty DVD players send multimedia contents simultaneously to the screens of each state, suggesting that electronic media increasingly provide consumers almost instantly with information, images, and experiences which in the past where only available in hard copy (newspaper, photographs, mail etc.) and in more time consuming ways.  Paik began to use television cabinets early in his career, and the TV soon became a metaphor for the mass medium of the future.

John Cage Robot II was included in the 1994-1996 traveling exhibition Electronic Super Highway: Nam June Paik in the ’90s, which highlighted 40 new works that explored the artist’s view of the cyberspace age.  John Cage Robot II can be interpreted as Nam June Paik’s homage to his friend and experimental composer John Cage. The work is made of eleven vintage wood television cabinets assembled in the form of a robot. The television screens show a continuous-loop video of Cage’s performances (one involves a performance by Paik’s collaborator Charlotte Moorman) and interviews, edited as fast-paced film sequences fading in and out in circle shapes, and mixed with moving and turning abstract patterns. The video reminds us of Paik’s and Cage’s fascination for experimentation and elements of chance.

Robots are a theme that continued to interest Paik throughout his career. He enjoyed collecting robots, and the robots he created with TVs became his signature works. One of his first robots was Robot K-456 (1964), which he build using his nephew Ken Hakuta’s toy parts and electric motors and his sister in-law’s bra. John Cage Robot II is part of his series Family of Robot. These are works that resemble human figures and humanize technology, sometimes through anecdotal elements as in the case of Crystal Bridges John Cage Robot II.