My Time on the Sod Squad: Prepping the Forest for Chihuly 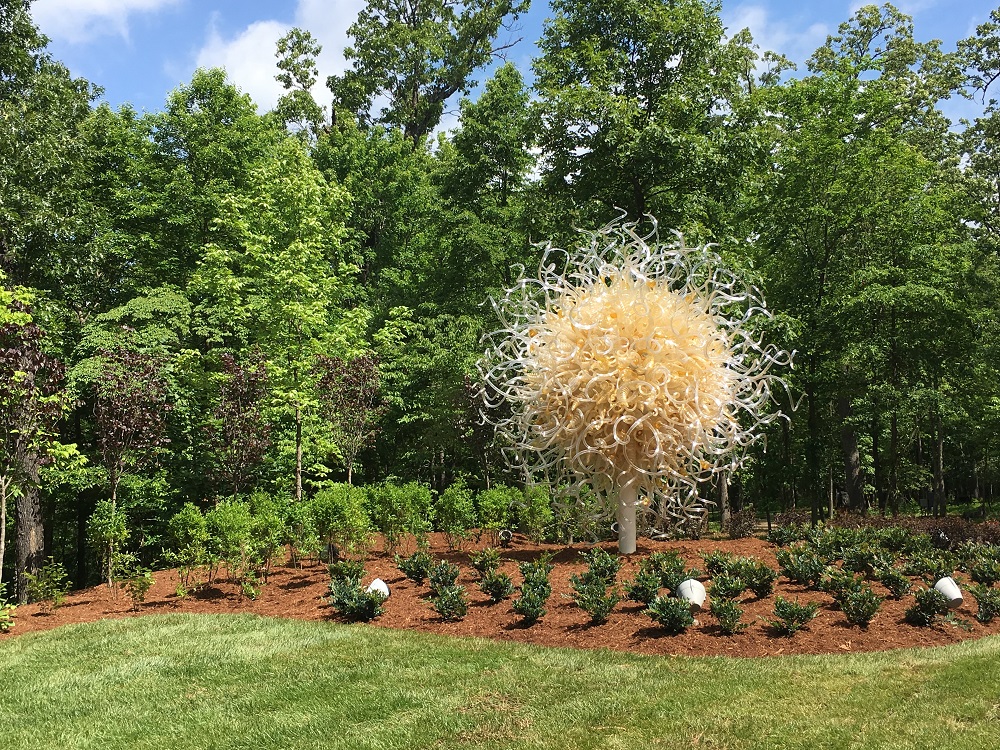 Crystal Bridges has a professional team who manages our 120 acres of forested grounds. It’s a small, but DYNAMIC group of 8 men and women who keep everything mulched, watered, trimmed, mowed, fed, planted, weeded, cleared, cropped, and raked, as needed, year round. They are assisted by a dedicated cadre of volunteers known as the Avant Gardeners who keep the wildflower beds weeded and assist with other tasks around the grounds as assigned.  Under normal business-as-usual conditions, that’s plenty of people to keep everything ship shape. But last week was anything but Business as Usual.  Last week was the final run-up to the members’ preview of Chihuly: In the Gallery and In the Forest, and the grand opening of the new North Forest Trail where the outdoor portion of the exhibition was installed.

Those of you in and around Northwest Arkansas will be aware that the operative word for this spring has been RAIN. Rain in torrents. Rain in squalls. Rain in buckets, sheets, and even the occasional gentle shower. Northwest Arkansas has rained like it’s its JOB, and while this is nice for the water levels on our local rivers and lakes, and makes for happy lawns and veggie gardens, it also bedevils any plans you might have for outdoor landscaping en masse.  For many weeks, between rainstorms, the Trails and Grounds crew had been building plant beds and other “hardscaping” features and planting thousands of native plants. But beyond the landscaped beds, there were still acres of post-construction bare dirt to be covered. So the crew called for a Sod Squad of volunteer staff members to come out last Thursday morning to lay down dozens of pallets of rolled sod and pine mulch. I was one of the Squad.

I arrived at 8:30, but the first squad had reported for duty much earlier than that, and had already laid out more than 100 rolls of sod before I even got started.  Taking up where they left off,  I and the other staff volunteers on my team started hustling sod, hefting the heavy rolls from pallet on a fork lift, laying them in place, and unrolling them. This involves muscles in the back, shoulders, thighs, rear-end, stomach, neck, arms, fingers, and everywhere else, which, in my case I discovered, had been sorely neglected. Many hands make light work, however… or so I’m told.  Within the first hour, fortunately, the sodding was complete. (And I was more or less completely covered with said sod:  the front of my shirt and jeans frosted with dirt.) 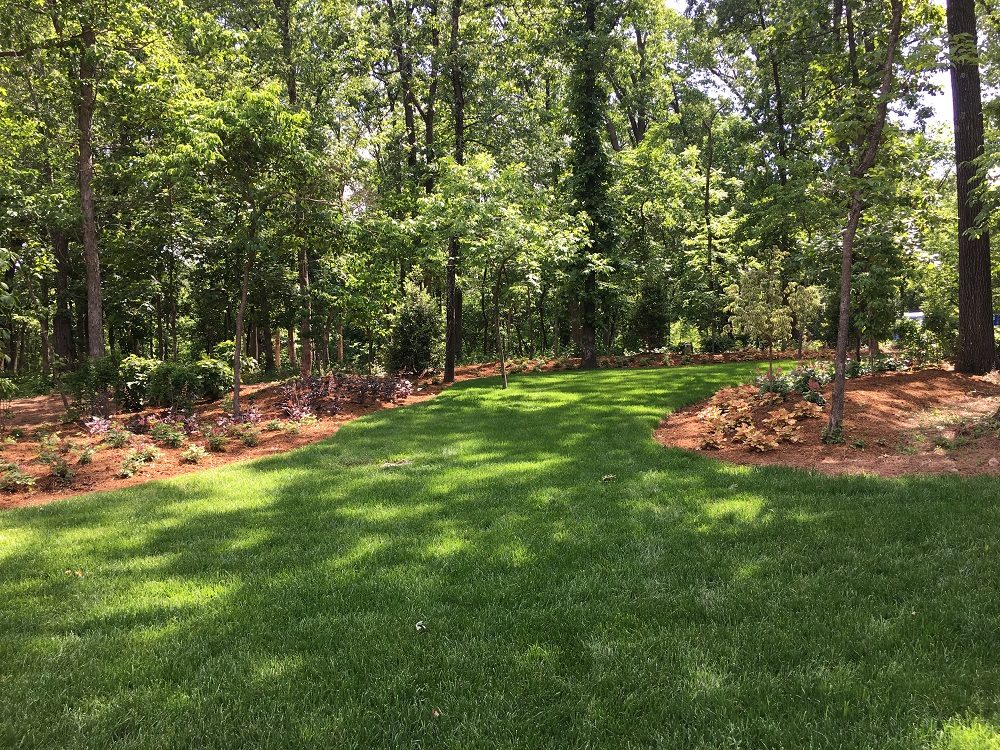 My squad was reassigned to pine mulch duty.  Pine mulch—a technical term for “dusty bales of pokey, itchy pine needles”—is used to cover areas where the Grounds team wants to encourage new forest growth, so the earth needs to be accessible to natural seeding by trees and native understory plants. The loose needles permit some sunlight to reach the ground, so seeds can get enough light to germinate and eventually the little plants can grow up through it, resulting in a naturally populated forest clearing.

Laying pine mulch involves untying and spreading bale after bale of pine needles over what seemed to me to be roughly 47 square miles of bare dirt, though I’m told it was considerably less than that.  Before we began, we got an impromptu lesson in the Finer Point of Needle Scattering from Gavin, one of the Grounds Crew. “You want to pick up a bundle of mulch and shake it, like this,” our drill master told us, demonstrating, “so that individual needles are falling.  No clumps.” 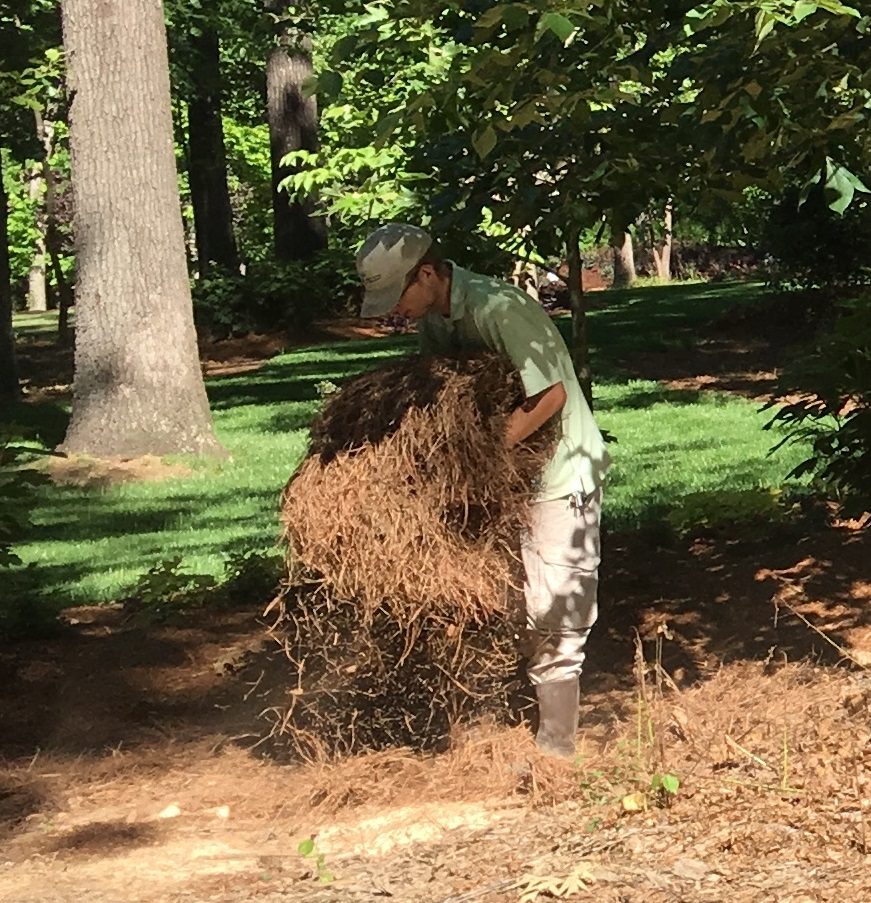 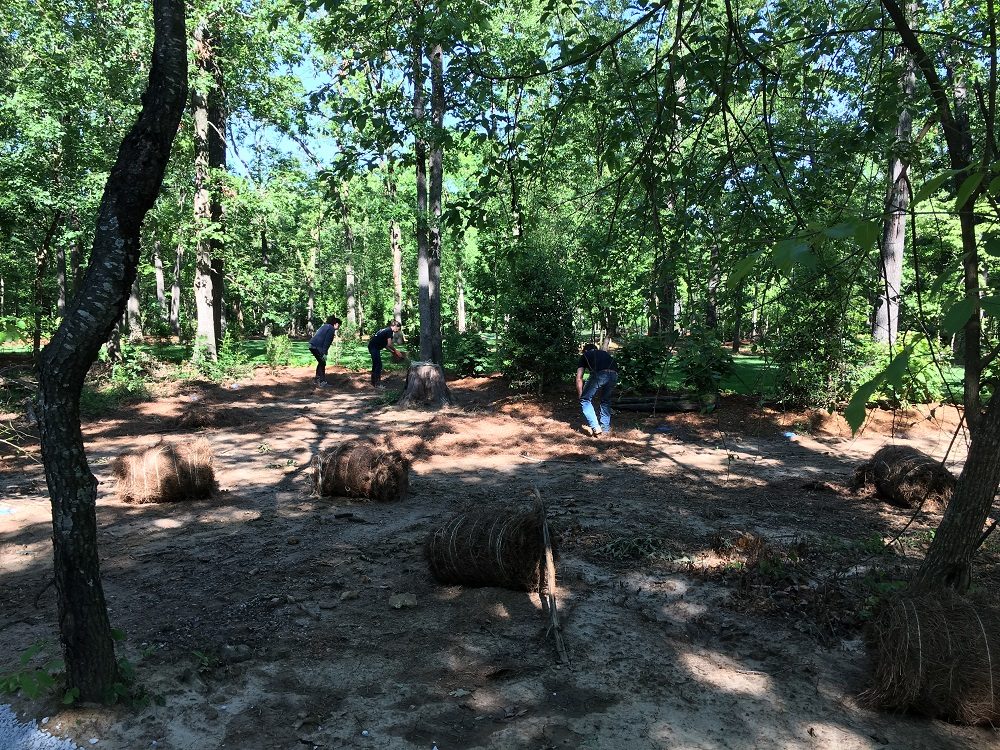 Before: bales in place and volunteers at work, pine-mulching their hearts out.

“Yup, it’s dusty work,” sang out Scott Eccleston, the museum’s Director of Operations, cheerfully. He was striding alongside our group, scattering pine needles merrily.  “You won’t believe what comes out of your nose at the end of the day!”

Oh, I bet I would.  I glanced over at Scott. He had been here since 6:30 in the morning, was spreading mulch at twice my pace, and had not a smudge of dirt on him anywhere.  How did he do it?  My shoes were full of pine mulch. There were little rocks inside my gloves. Not wanting to look incompetent, I stepped and shook with renewed vigor.

Just when I realized my joints were beginning to freeze up like the tin man, it was over.  I looked up and realized that our mulching was complete. What had once been rocky soil in the heart of the woods now appeared to be soft, needle-covered forest floor. 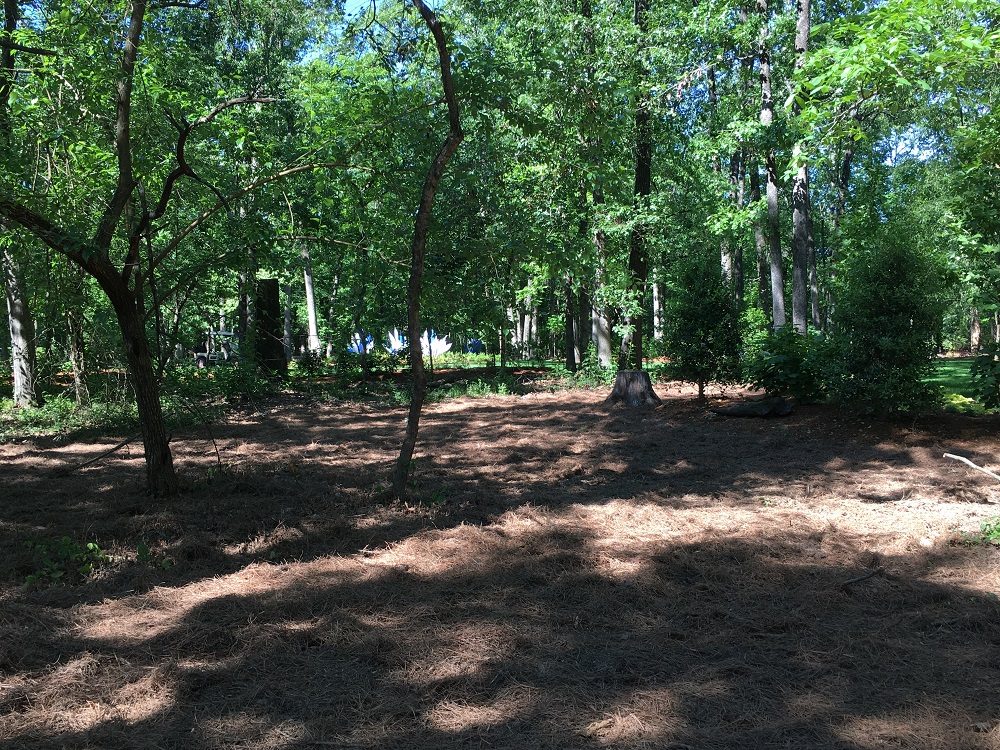 After: no more unsightly bare dirt!

The muddy patches alongside the trail were now emerald green, gently curving swaths of lawn. Magically, the muddy work-in-progress I had stepped into that morning had been transformed into a manicured woodland landscape. Sprinklers filled the air with droplets of water, golden in the sunlight, and little rainbows hovered over the new-laid sod. Everything looked perfect: fresh, inviting, and ready for our guests to explore and enjoy.

We began tramping along the path, back to our waiting vehicles, hot showers, and clean clothes.  Along the way, along the curving pathways, we passed several of Dale Chihuly’s whimsical glass sculptures, which appeared to have sprung from the forest floor like living things.  I straightened my aching shoulders, wiped my runny nose on the back of my dirty glove and held my head up.  It was done. It was beautiful.  And I helped. 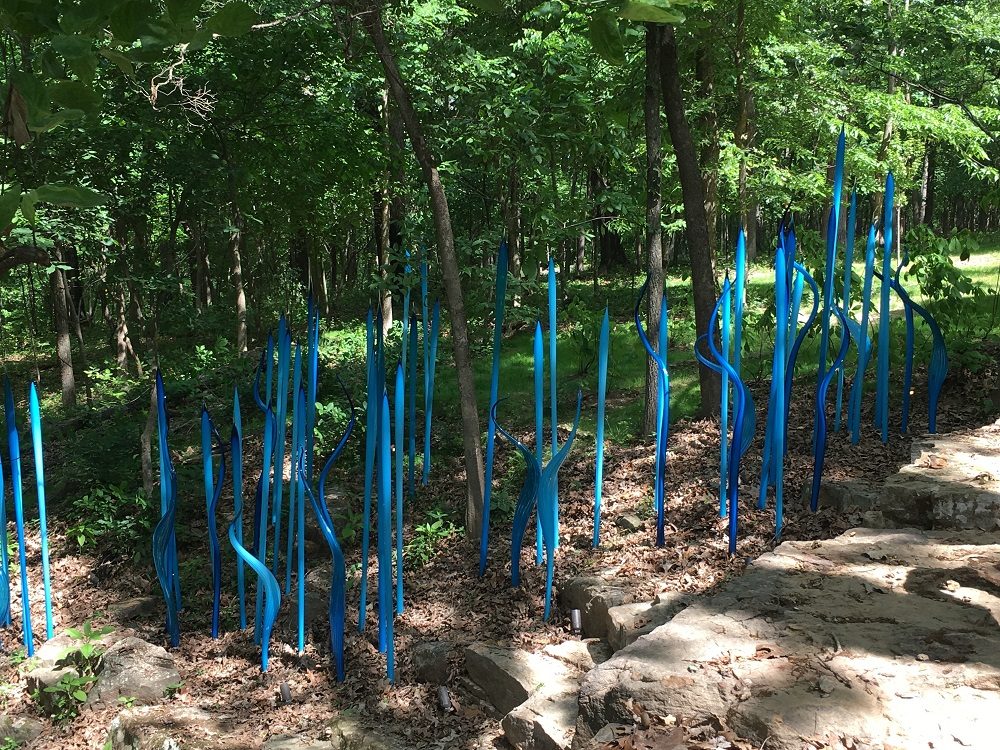 Chihuly’s Blue Reeds installed on the grounds of Crystal Bridges. I helped. Sort of.

To reserve tickets to view Chihuly: In the Gallery and In the Forest, click here.  Don’t miss it… I worked really hard to make sure it looked just right.