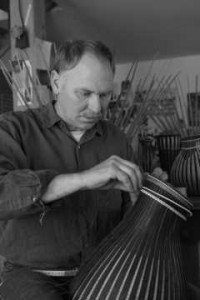 Leon Niehues at work in his studio.

Leon Niehues is always in a hurry.  When running errands, to the post office or the grocery store its rush, rush, rush to get back work.  Not because he’s late, but because his job is in his home and the work he does is making baskets.   Every day he hits his studio to contemplate the 4 to 5 projects he has going at once.  Leon is a nationally known basket weaver.  He tells me that baskets, by nature, are time-consuming.  And when you figure in the fact that he always has multiple pieces going at once, it’s not surprising he’s in a hurry to get back to work. 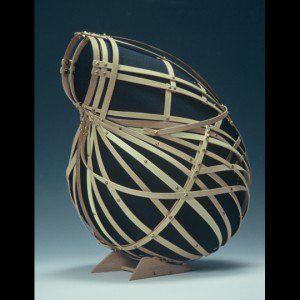 When asked what motivates his work Leon says both his work and life are completely related to the Arkansas environment in which he lives.  It’s no wonder.  His Huntsville home is surrounded by 40 acres of property that is full of the materials he uses in his creations.  And even though most of his days are spent in the studio, Leon makes time for breaks in his garden every hour to remind himself of where he garners his inspiration.

Art inspires art.  During our conversation Leon told me about how he first heard about the Museum.  The news came by way of a call from Tracy Cude, Crystal Bridges’ Chief Financial Officer.  To Leon’s surprise, Tracy told him how the natural wood materials and organic weaved forms of his baskets partially inspired architect Marlon Blackwell’s design for the Museum Store.  She asked if he would be interested in being a part of the Store’s regional artist program.  Leon’s baskets, in many ways, tell the Crystal Bridges story because of their craftsmanship and natural materials.  Once the Museum was open, we couldn’t keep them on the shelves.  As soon as we put one out, it was sold.  We were calling Leon weekly for more baskets.  I think he was calling his family and friends to sacrifice their baskets for us, promising to replace theirs later. It was truly a great success story for a local artist. 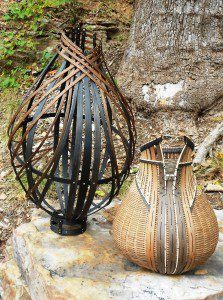 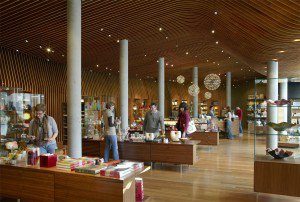 Crystal Bridges’ Museum Store, designed by architect Marlon Blackwell, features an organic ribbed ceiling reminiscent of the underside of a mushroom…or the curved and striated shape of a basket.

After over 30 years of basket weaving, Leon says there’s not much that scares him artistically.  However, as an artist, he says you are putting a part of yourself out there, so there’s always a little fear that someone won’t like something you’ve done.  That won’t stop Leon from trying to use his skills in new and innovative ways.  When I asked what’s next for him, Leon said he would like to explore creating purely sculptural pieces that in no way resemble a container.  I have to say I can’t wait to see them!

Leon’s baskets are on display and available for sale at the Museum Store.