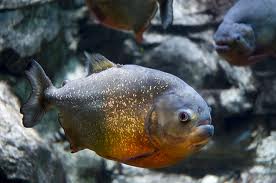 Crystal Bridges Museum of American Art resides on 120 acres of Ozark forest. The building itself is nestled in the base of ravine with water from the Crystal Springs weaving under and around its structures; water that is now filled with piranhas. 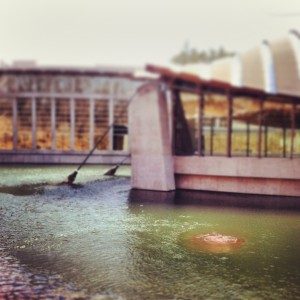 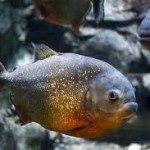 The piranha is a predatory fish known for its sharp teeth and ferocious demeanor. Although they are not large in size—generally only 5 to 10 inches in length—piranhas are able to take down large prey by hunting in schools. Ordinarily, piranhas are found in South America’s Amazon Basin, so nobody ever expected to see them here in Bentonville, Arkansas.

According to sources, the first piranha sighting happened in mid-March. Several more were spotted only days later. With no natural predators in the area, the population has been growing unchecked.

Scientists remain baffled as to how the vicious fish ended up in the pond. Perhaps it was a prank played by under-challenged teenagers with limited supervision and access to Brazilian wildlife; possibly a rupture in the Earth’s crust made it possible for the fish to escape from some subterranean lair where they had been resting dormant for thousands of years; perhaps it was the polar vortex. 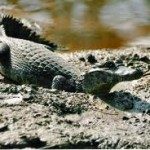 Whatever the cause, there must be a solution. Having struggled with conventional approaches to elimination the fish population, Crystal Bridges’ Grounds Crew has moved on to a more creative plan: predators. In the coming weeks, a shipment of 17 caimans and two Amazon river dolphin will be released into the ecosystem.

“What’s the worst that can happen?” inquired Brown.

NOTE: April Fools!  But, if it’s any consolation, we do have carp in the ponds at times. You might also see the occasional turtle—never know what trouble they might be up to.