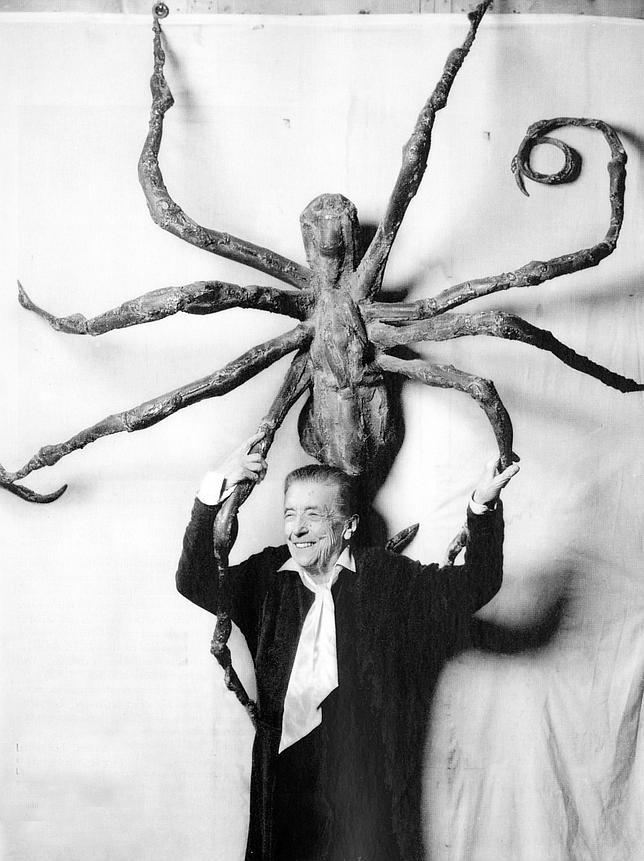 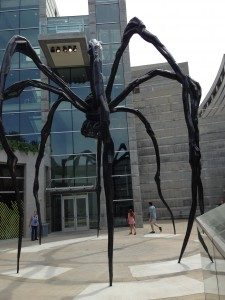 Like her monumental sculpture that now looms over Crystal Bridges’ courtyard, Louise Bourgeois was an artist who embodied a host of seeming contradictions. A slight woman, she worked in the toughest of media—steel, marble, and bronze—as well as those that were softer or more traditionally “feminine” such as textiles, plastic, and rubber.  She found it difficult to speak about the underlying emotions and experiences behind her early works, yet finished her career as one of the most confessional and cathartic artists of the century, offering up difficult personal emotions to explain every aspect of her work. 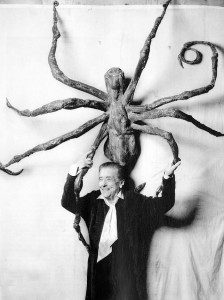 Bourgeois’s Maman is one of the most famous of her works. The spider, she claimed, was not an ominous or frightening figure, but rather a representation of the protection and industry of her own beloved mother, who repaired tapestry for a living and died when the artist was 21.

“I came from a family of repairers,” she said. “The spider is a repairer. If you bash into the web of a spider, she doesn’t get mad. She weaves and repairs it.”

Bourgeois often spoke in this same manner about her work:  as a means of dealing with or repairing her own experiences and emotions. “Everything I do is inspired by my early life,” she claimed. And her early life, spent in Paris and its environs, was a troubled one. Her father, a dashing man with a roving eye, took a young mistress, Sadie Gordon Richmond, and installed her in the family home as governess to his children when Louise was ten years old.  The affair continued for ten years, creating a storm of conflicting emotions in the young Louise. 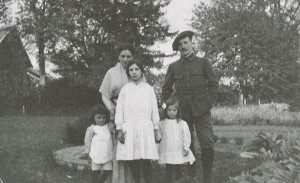 Louise Bourgeois, at right, with her sister, brother, and parents, in France.

“Now you will ask me:” she later wrote. “How is it that in a middle class family this mistress was a standard piece of furniture? Well, the reason is that my mother tolerated it! And this is the mystery. I was betrayed not only by my father, dammit, but by her, too. It was a double betrayal.”

To make the web of emotions more complex, Louise was her father’s favorite, and she loved him dearly, even though, as the third daughter to be born into a family with no male heirs (a brother was born later), Louise felt herself a disappointment to her father. “A daughter is a disappointment,” she said. ”If you bring a daughter into this world, you have to be forgiven.” 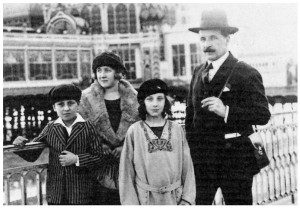 Louise Bourgeois with her brother, her father Louis, and Sadie

And while she was terribly sensitive to the humiliations visited upon her mother by her father’s infidelity, she was also angry with her mother for allowing it to take place, and frustrated with French society for expecting such absurd sacrifices of its women. ”French men have their little betrayals,” she said. “The mother is supposed to forgive. She is supposed to say she’s sorry that he betrayed her.” 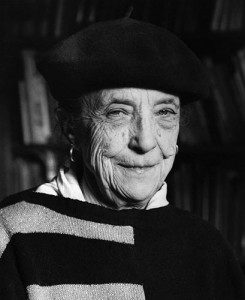 Bourgeois was not widely recognized for her work until late in her life. She was 71 when she had her first one-woman show at the Museum of Modern Art in New York (the first female artist to be accorded such an honor) in 1981. And it was not until this point that she began to speak openly about her childhood experiences and emotions and their influence on her work. Once she opened up, she released a flood of words throughout the rest of her career:  about her feelings of anger, of fear, and of self-doubt, all of which she wrestled with and translated into her work.

With all this baggage to carry… perhaps it’s not surprising that Bourgeois’s protective spider figures became increasingly large from 1995 to 1999, culminating in Maman.  Earlier and later riffs on the spider theme were large, but still not reaching the dimensions of her most famous arachnid sculpture:  Spider, 1994, was roughly 21 feet tall. The Nest, also made in 1994, is a grouping of spiders, each larger than the one before it, the largest of which is some 15 feet tall. Later came Crouching Spider, a mere 9 feet in height. Others followed. 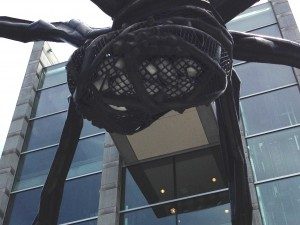 Maman cradles a nest of 20 marble eggs in the wire-mesh sac on her abdomen: a visual representation of all the troubles the artist gave over to her eight-legged spirit animal to both defend and defeat. The sculpture balances delicately on leg-tips only a few inches wide, and seems to stand precariously on upward-arching appendages that bend awkwardly, unevenly, as if she is warding off a strong wind, or reeling from a blow. Yet stand she does—somehow managing to be simultaneously aggressive, protective, frightening, whimsical, fearsome, and fearful, all at the same time. An apt representation of the life and work of her inscrutable maker.