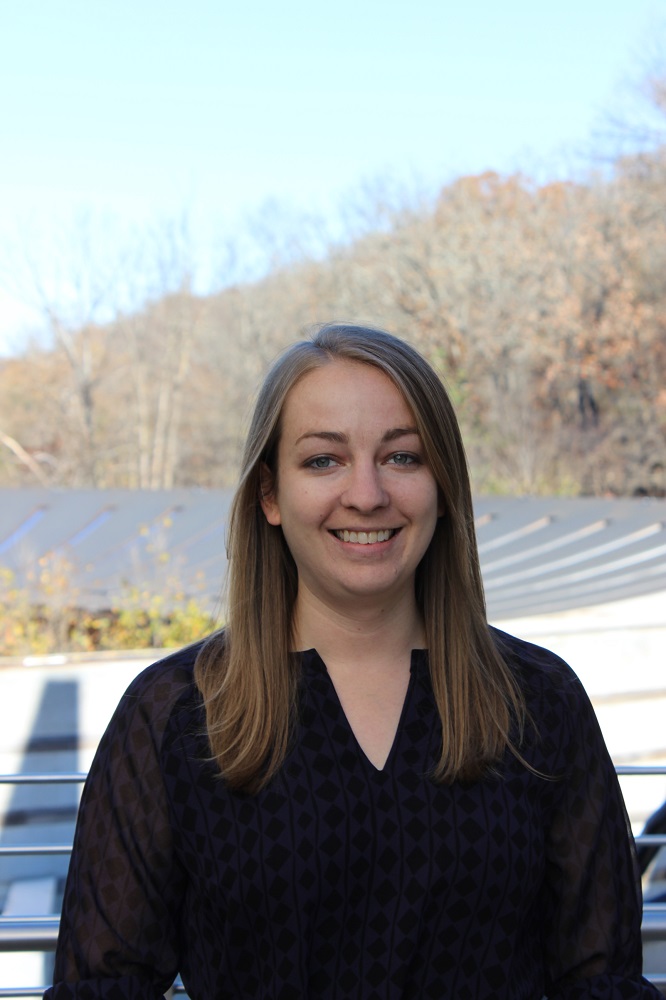 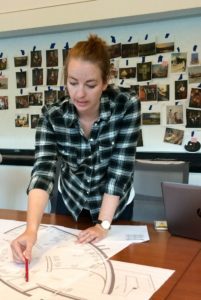 “A lot of people think I just pick out paint colors,” Crystal Bridges Exhibition Designer Jessi Mueller explains to me as she places several complicated diagrams on the table. “It’s actually much more than that.” Few consider where or how people prefer to move through a building, or what they like to see when they turn a corner, but as a student of architecture, Jessi Mueller spends a lot of time thinking about how people move through space. With a click of a computer mouse, Jessi creates corridors where people are most inclined to walk, conjuring walls to improve the aesthetics of the room. In her grasp, architecture that seems fixed becomes malleable, something that can be changed to suit the objects that inhabit it and the people who move within it.

Originally from O’Fallon, Missouri, a suburb of St. Louis, Jessi first became interested in architecture when she visited the Dana Thomas House in Springfield, Illinois, designed by Frank Lloyd Wright. With fondness, Jessi recalls her experience that day: “I was mesmerized; I think it was the first time I realized what space could be. I spent years after that doodling floor plans on graph paper and playing with Legos way past an appropriate age. I never really considered another major when applying to colleges.” And so, at Drury University in Springfield, Missouri, Jessi graduated with a Bachelor of Architecture and a BA in Art History in 2007. However, she soon realized that she was seeking something different than the traditional architecture career path, so she furthered her studies with a master’s degree in History and a graduate certificate in Museum Studies from the University of Missouri, St. Louis.

Jessi is the only exhibition designer at Crystal Bridges, and often works on multiple projects at a time. One of her major projects right now is the exhibition design for the reinstallation of the Colonial and Early Nineteenth-Century galleries. To illustrate her role in the endeavor, Jessi shows me a complicated spreadsheet and points out a few numbers. She explains to me that with the current layout the galleries display 149 works of art, however, their goal is to fit up to 190 works. Her first task was to create space in the galleries for all of the artwork. Using AutoCAD, she created three different layouts and presented them during a 90-minute meeting in which a team of curators, project managers, interpretation managers, and educators debated the merits of each arrangement, eventually settling on a winning combination of two that was able to accommodate the increased number of works. Jessi then used the thematic groupings created by the curatorial and interpretation team to map the layouts of the individual works, holding a “walkthrough meeting” in which every aspect of the layout was discussed, from visual rhythm and color grouping, to potential hot spots, to technicalities of lighting certain works. Her next task will be to incorporate that feedback into another new layout. We will let you know when she settles on paint colors! 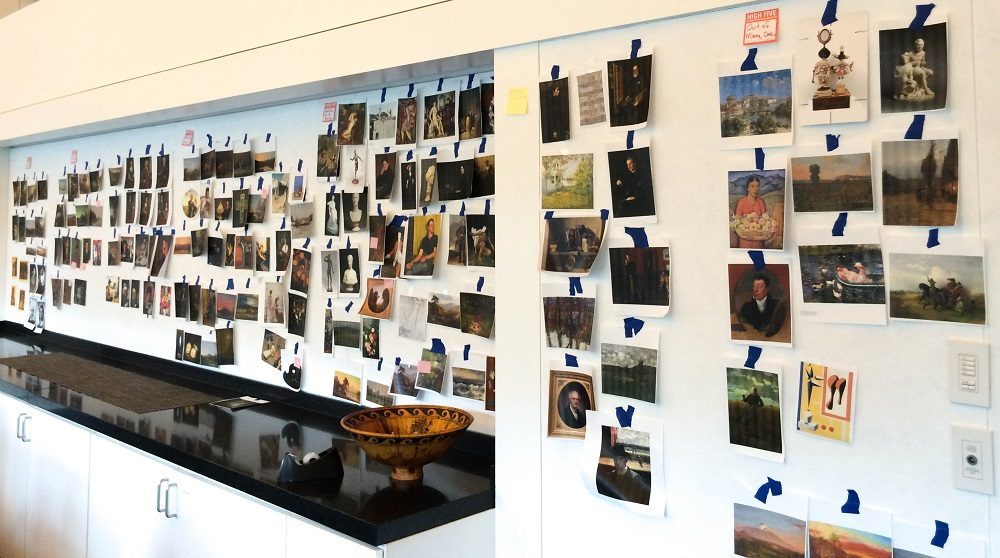 Walls in the Museum’s Curatorial offices are covered with printed images of every work to be displayed in Crystal Bridges’ Colonial and Early Nineteenth Century Gallery, as the exhibition and interpretation teams work out how they want the works to be grouped in the final gallery layout.

As a young museum, Crystal Bridges is always looking for creative solutions and new ideas, which is one reason why Jessi enjoys working here: “I love working for an institution that gives me the opportunity to try new things. All of our projects are such a huge collaborative effort; it’s exciting to work with such passionate and creative colleagues.” Each project is like a puzzle with each individual team member contributing a valuable piece based on their own strengths and specialties. Jessi’s role involves not only exhibitions and curatorial teams, but also facilities, security, collections, communications, and education. Some might find it difficult with work with so many moving puzzle pieces, but Jessi enjoys it, praising the “trust and accountability” such a diverse team builds together. After all, Jessi is a problem solver, working each day to accommodate the varying needs of the internal team while still maintaining her goal of creating the stunning exhibitions for which Crystal Bridges is well known.