Minimalism and Murder: A Glimpse at the Relationship of Carl Andre and Ana Mendieta

This post was prepared by Danny Baskin, Crystal Bridges’ summer intern in the Interpretation Department.  –LD

In the late spring of 2014, a crowd gathered around a smeared pile of blood and guts festering outside of the Turbine Hall, a new building of Tate Modern in London.  As they stood, they mourned the loss of a brilliant artist that died almost 20 years earlier.  The remains of a chicken had been poured over the sidewalk in defiant protest of a retrospective of the acclaimed Minimalist sculptor Carl Andre at the DIA Art Foundation. The artist the group mourned:  Andre’s late wife. 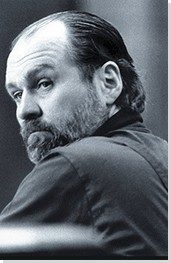 Carl Andre is a big deal.  He’s been showing in major galleries and museums since the late 60s.  He shared a studio with Frank Stella.  He’s had major theorists write about him and he’s included in every modern art history book out there. He’s thought of as a seminal artist in the Minimalist movement. He was also charged with murdering his wife in 1988, a thing not usually mentioned in the art-history books. 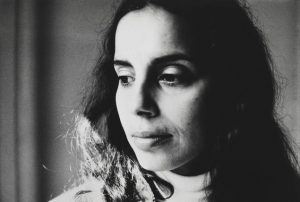 Ana Mendieta is generally thought of as a sculptor and performance artist, and has been connected to the land art movement, body art movement, and feminist art movement.  She often used her own body as a medium, using landscape and earth in order to discuss a reconnection to nature and her separation from her home of Cuba as a young girl. She also used blood (often from chickens) in performances to symbolize death, rape, and other violence toward women in the hopes of starting a larger conversation. She combined experimental genres of the time to produce shocking, poignant art that moved the canon and society forward.  She’s been shown in major museums and galleries and is part of important public collections across the world, yet rarely is she a part of the same history books Andre is so prevalently featured in.

Mendieta and Andre met in 1979 in the usual way, through mutual friends.  They dated for many years until finally marrying in ‘85.  They were well known in the New York art scene not only for their work, but for their drinking and fighting.  After six months of marriage, Mendieta died tragically after falling from the window of Andre’s 34th story apartment. Andre was later tried for second degree murder and acquitted of all charges by a juryless court. As there were only two people there that night, and only one who survived, we will probably never know the full story, but there are certain facts we do know.  We know the only pseudo-witness, a doorman, heard a woman scream, “no, no, no,” before the fall.  We know Andre, in the 9-1-1 call, claimed she committed suicide. He told the operator they were having an argument about his notoriety (and her lack of it) based on gender before he watched her jump out of the bedroom window and fall to her death.  We know Andre was found with fresh scratch marks on the tip of his nose and arm when police arrived. We know some evidence was unusable in the case and that Andre opted for a judge-only trial rather than having a jury of his peers determine his guilt.  We also know the aftermath.

The art world split between those who thought Andre was guilty and those who thought him innocent.  Many on the ‘innocent’ side happened to be gallerists, collectors, and others who benefited from his lucrative career.  Many on the ‘guilty’ side thought Andre was protected as a white male in the art scene, and that a Cuban female artist would never get the same recognition or justice.  The argument the couple had the night of Mendieta’s death and the controversy afterwards illustrate the frustration felt over deep-seeded sexism in a so-called ‘progressive’ community.  The argument has raged on for decades now with no end in sight.  There has been a book written1, numerous articles covering the story2, and protest after protest done in the name of Ana Mendieta’s memory3.

As outsiders, we cannot know the truth of what happened that night.  What we can do is recognize Ana Mendieta as an important and brilliant artist whose life and career were cut short.  We can remember her work and keep her legacy as an artist alive and strong. We can recognize her feminist fight for women’s equality (in the arts and otherwise) and support others who strive for similar goals. We can make sure to add Ana Mendieta to the history books.

Carl Andre was a minimalist artist who made sculptures using metal plates that sit directly on the floor and can be stepped on. In Crystal Bridges’ 1940s to Now Gallery, guests will find Brice Marden’s minimalist artwork For Carl Andre (1966, repainted 1969-1970).  Marden was a friend of Andre’s, and produced this work as a tribute. The work’s metallic gray square, made of oil paint and beeswax on canvas,  refers to Andre’s sculptures instead of his physical appearance.