Juneteenth:  A Day to Reach for and Celebrate Our Highest Ideals 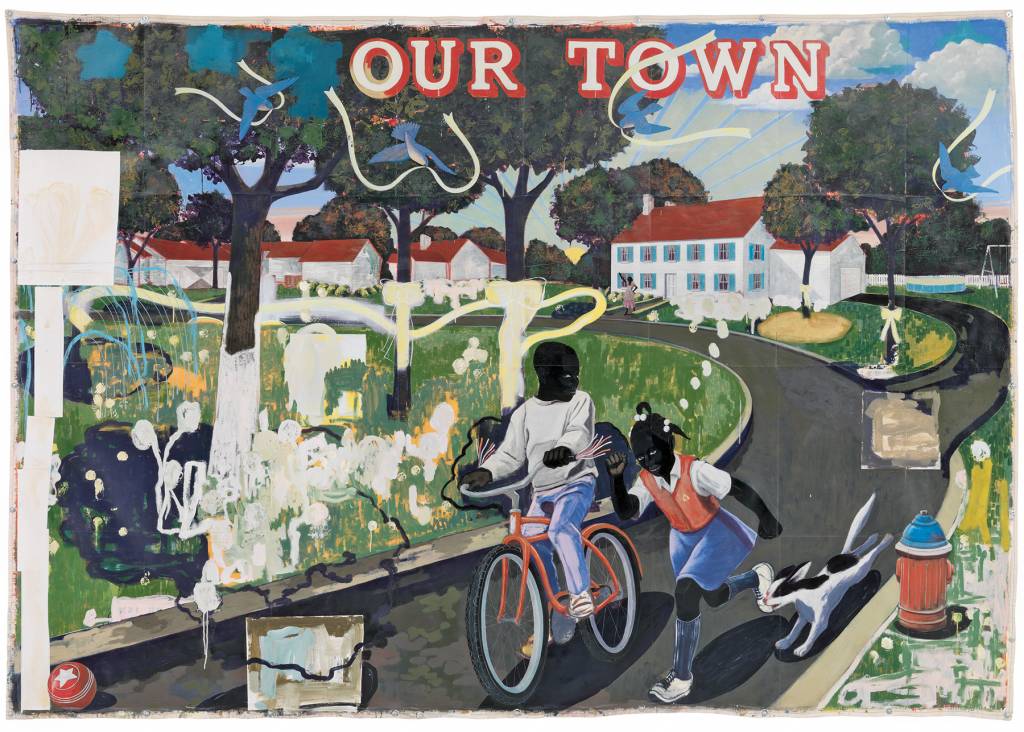 Today is June 19, traditionally celebrated in African American communities as “Juneteenth,” or Emancipation Day. Although the Emancipation Proclamation, issued January 1, 1863, declared that all slaves in the rebelling Confederate territories to be legally freed if they reached Union-held territory or came under Union control.  However, word did not reach all the far-flung regions of the country until it was announced by US federal troops in Galveston, Texas, on June 19, 1865.  (follow this length for a very interesting, in-depth article about the aftermath of this proclamation) In the twenty-first century, Juneteenth stands as a celebration of hard-won freedoms by Black Americans through the tumultuous Civil Rights Era, as well as a call for awareness of and solidarity to fight the discrimination against African Americans that continues today.

In a statement given on the 2016 anniversary of Juneteenth, President Barrack Obama said:

“Juneteenth is a time to recommit ourselves to the work that remains undone. We remember that even in the darkest hours, there is cause to hope for tomorrow’s light. Today, no matter our race, religion, gender, or sexual orientation, we recommit ourselves to working to free modern-day slaves around the world and to honoring in our own time the efforts of those who fought so hard to steer our country truer to our highest ideals.”

In observance of this day, it seems suitable to present George Inness’s painting An Old Roadway, created around 1880.  The work depicts an African American woman carrying a pack and a stick, making her way along a narrow track into a sunny glen where she pauses to converse with a young white shepherd who watches his flock.  The painting reflects the migration of many former slaves to the North following the Civil War, and symbolically represents the long and difficult road from slavery to freedom as well as the challenges of Reconstruction, but not without hope. The woman in the painting has exited the dark wood behind her and seems to be headed toward a brighter, more peaceful future. One step at a time. 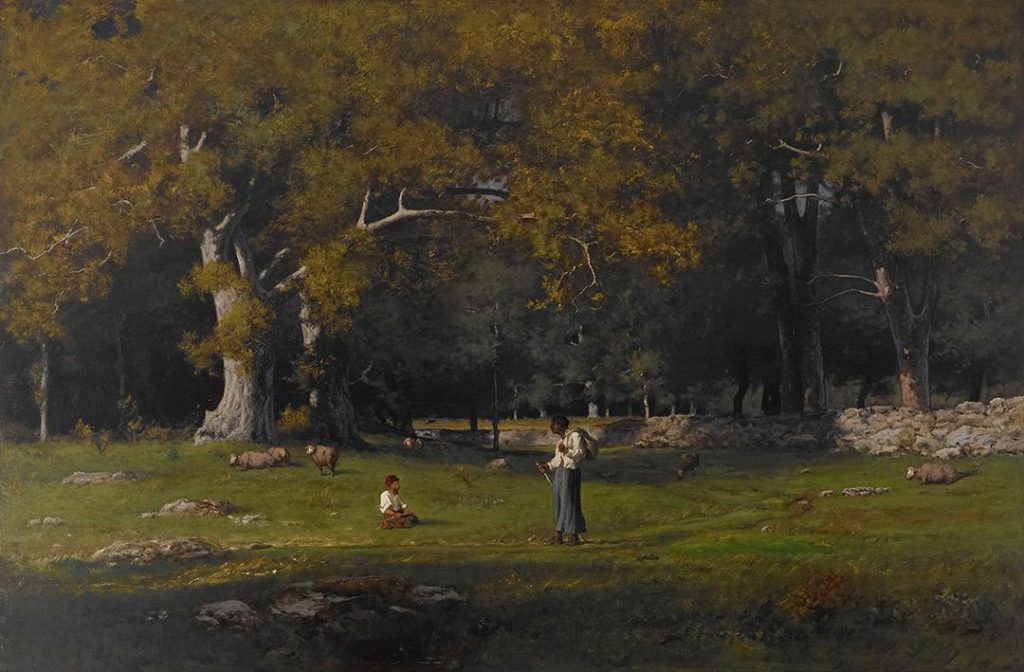 Of course, in real life, it hasn’t been such an easy road to travel for Black Americans.

Earlier this month, vandals hung a noose in a display in the Smithsonian Institution’s African American History Museum. Lonnie Bunch, the museum’s founding director, called the incident “a painful reminder of the challenges that African Americans continue to face.”

The day after the event, employees of the Smithsonian’s many branches and entities gathered on the lawn around the museum in a show of solidarity, diversity, and resistance to bigotry and hatred.

The staff of Crystal Bridges stands with those of the Smithsonian Institution,  an organization that was founded —by a non-American citizen in honor of the high ideals he felt our country represented—“for the increase and diffusion of knowledge.”  Knowledge is the basis for understanding—and understanding is the basis for tolerance, equality, and unity. Museums, as centers for knowledge, serve an important role in our society beyond preserving and displaying works of art and artifacts of history. Museums should serve as brave places to encourage conversation about some of our most challenging and important issues. 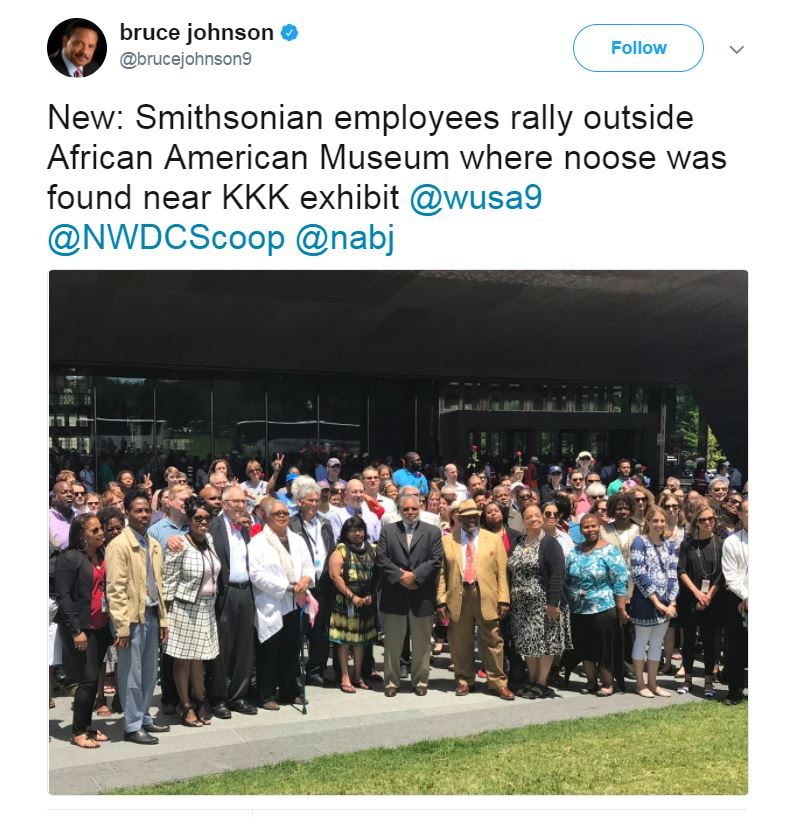 Crystal Bridges is committed to inclusion and diversity. Actively acquiring and exhibiting works by artists of all ethnicities, races, cultural backgrounds, and gender identification is part of this, so that museum guests from every demographic sector of the country will be able to “see themselves” on the gallery walls.  A wide range of programming, featuring the diverse voices of artists and community members, as well as programming that helps remove barriers for low-income guests, English language learners, vision and hearing impaired guests, and others. But the importance of diversity goes much deeper than just the artworks in the galleries. It is also vital that Museums build diversity in their institutional leadership and staff, from the board on down. This is an issue that plagues American museums, including ours. Many have stepped up to combat this significant issue including the Ford Foundation, Mellon Foundation and The Walton Family Foundation, but it will take a collective effort to make it a priority to achieve real, transformative change for the better–to “steer truer to our highest ideals.”

On June 19, at 1 p.m. in the Late Nineteenth Century Gallery, join  museum educator Raven Cook for a Juneteenth discussion in our permanent collection galleries. This conversation will honor the incredible legacy of African Americans in national history and will interpret several important works in our permanent collection in light of the emergent history of emancipation.