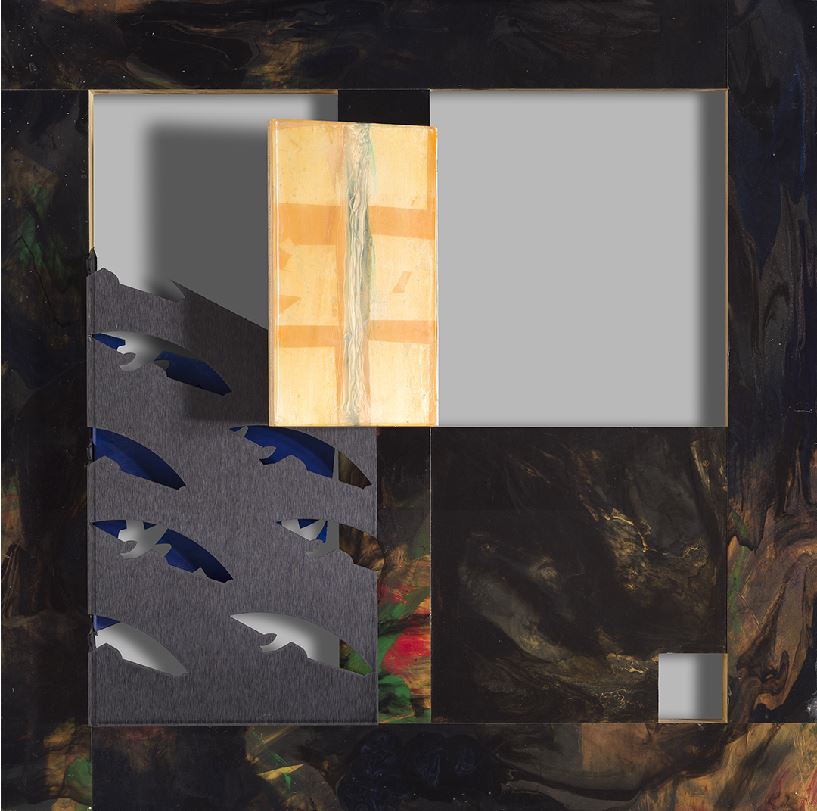 “Gilliam is not an artist to labor in the past for its own sake, rather, he explores it primarily as a means of reorienting the present, in order to provide a renewed vigor for new work, but equally to question the very foundation of painting.”

Join us this week in welcoming a new acquisition and gift to our collection, Sam Gilliam’s Black and Golden Door, painted in 1996. The work will be on view in our niche space off of the Colonial to Early Nineteenth-Century Art Gallery, giving us the opportunity to introduce Gilliam’s long, prolific, and innovative career to our collection and guests.

Gilliam is an artist who has been working for over 50 years in a variety of methods and media. He is most famously known for taking canvas off the stretcher to drape it in galleries, on floors, and in architectural structures. In Black and Golden Door, however, Gilliam utilizes layers of birch plywood, patterned paper cut-outs, and an internal frame that direct the viewer’s eye through moments of contrasting mass and void.

Black and Golden Door is part of the “hinge” series. The inspiration for this work arose as Gilliam was creating a commission for a New Orleans Customs House. He was fascinated by the depth and dimensions of the wrought-iron stairwell and other historical elements of the building’s architecture, and began cutting out holes in his work and adding layers of wood. This stacking of wood was a continuation of Gilliam’s practice of draping canvas, only in a different material. He realized that by incorporating piano hinges in the work, he could construct small “doors” that could be displayed as either open or closed.

Gilliam commonly works in series that progress organically through his interest in form, shape, and color. He frequently returns to his past motifs and simultaneously explores new content and forms in his work. Although highly influenced by artists and art history, he isn’t bound to a certain style, but rather by the belief that letting the materials be what they most naturally are is the most important thing.

Below is a little teaser of Gilliam’s life and creative output, but be sure to check out the installation yourself!

Sam Gilliam, born in 1933spent the first part of his life in Louisville, Kentucky, and would go on to graduate from the University of Louisville in 1952. After serving two years in the United States Army and completing his MFA in painting in 1961, Gilliam moved to Washington DC.  His early abstract work was originally inspired by European artists, including the work of artist Piet Mondrian, which led him to create bold, hard-edged, geometric paintings. 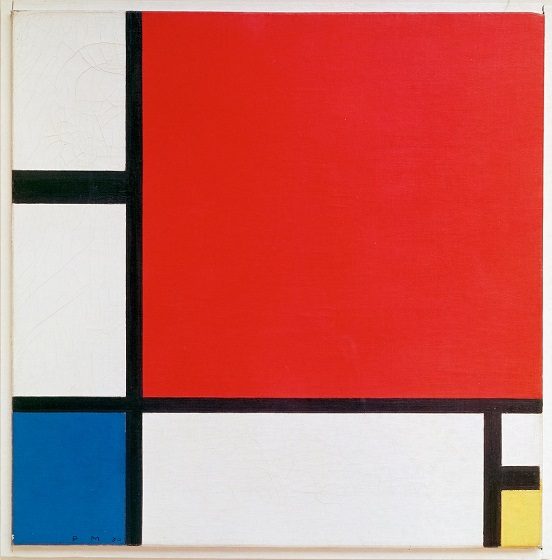 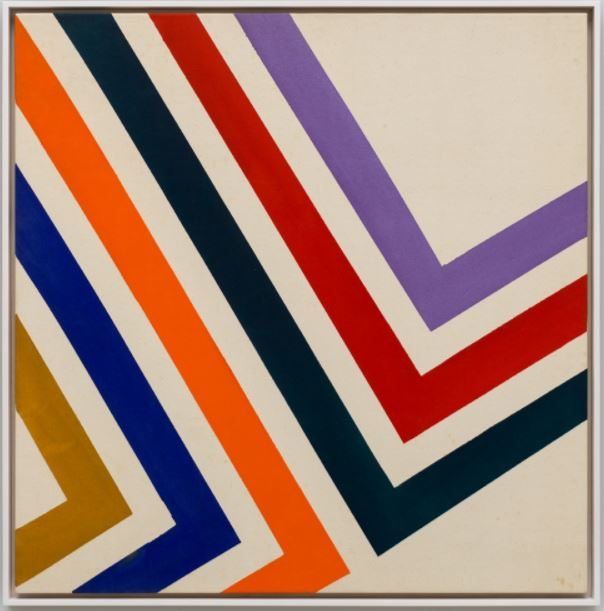 In DC, he became one of the youngest members of the Washington Color School, a group of abstract artists based in the region who embraced innovative uses of colors. They were part of the “Color Field” movement, characterized by large swaths of flat, solid color. In this style of painting, color itself became the subject, without having to represent anything else. Alma Thomas, whose work Lunar Rendezvous—Circle of Flowers is on view in our permanent collection, was also a part of the Washington Color School and a friend of Gilliam’s. 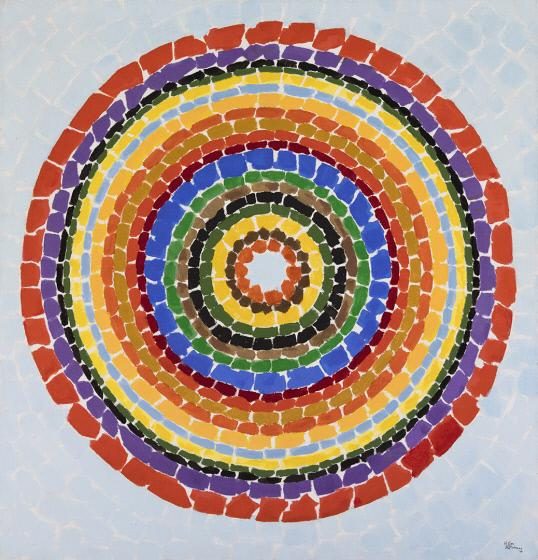 His style drastically changed as he started experimenting with creating fields of color through various ways of applying paint. He would drip, splatter, and allow paint to pool to create a saturated, yet dynamic coverage of surface area. Additionally, Gilliam is seen as the first artist to work with the canvas off of the stretcher, as a sculptural tool, calling it both “color architecture” and “sculpture painting.” 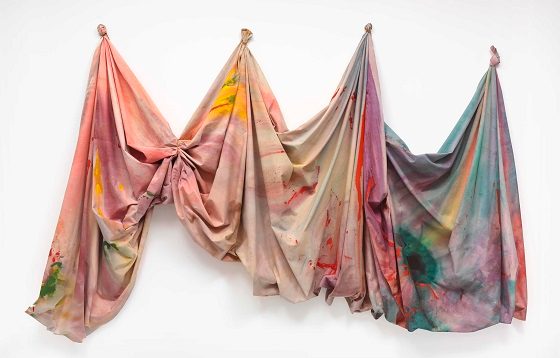 Gilliam is also viewed as being influenced by Abstract Expressionism, a major American movement in the 1950s that championed using colors and an artist’s gestural marks to bring out expression or emotion. Jackson Pollock, the most well-known Abstract Expressionist artist, experimented with dripping paint over large canvases on the floor in various colors, extending the design to the edges of the canvas and beyond, similar to the way Gilliam worked in his own unique style. 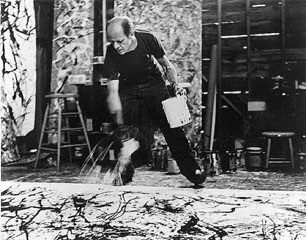 At first glance, the museum’s new acquisition, Black and Golden Door (1996), may appear to be outside of Gilliam’s thematic range. Upon closer analyses, however, the artwork exposes several reminders of Gilliam’s past work.

“Architectural painting,” – as Gilliam likes to call some of his works – involves stacking and folding forms to create layers, which jut out into the viewer’s space and creates the illusion of varying, yet simultaneous perspectives through the combination repeated shapes and textures. The construction of three dimensional forms from two dimensional surfaces is a recurring theme in Gilliam’s work.

This creation of depth echoes the ideas Gilliam explored through his drape paintings and earlier architectural paintings such as The Generation Below Them (1989). 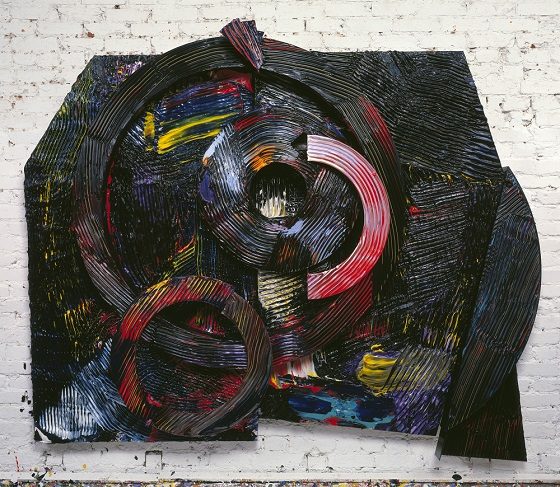 Sam Gilliam, The Generation Below Them, 1989, acrylic on canvas and primed aluminum with plywood support structure, 80 x 96 x 13 in. Collection of Don and Nancy Eiler. Photo: Mark Gulezian/QuickSilver 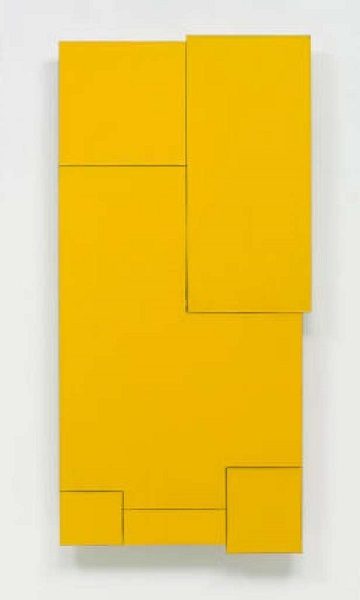 Shortly after Black and Golden Door, Gilliam returned to geometric style and a more simple color palette in his “Slatt series,” but continued to layer plywood, playing off his work in the 1980s and ‘90s while looking back to the his early geometric influences.

Gilliam has since moved to larger installations that respond to the architecture and surroundings of the space, similar to the way he started his first hinge series in New Orleans. 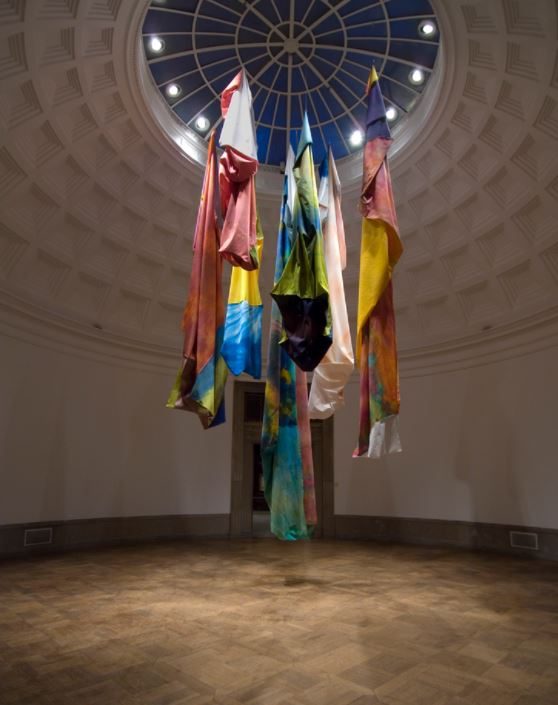 We hope you become inspired by our preview of such an innovative artist and are excited to see more of his artwork in the upcoming temporary exhibition, Soul of a Nation: Art in the Age of Black Power on view from February 3 through April 23, 2018.