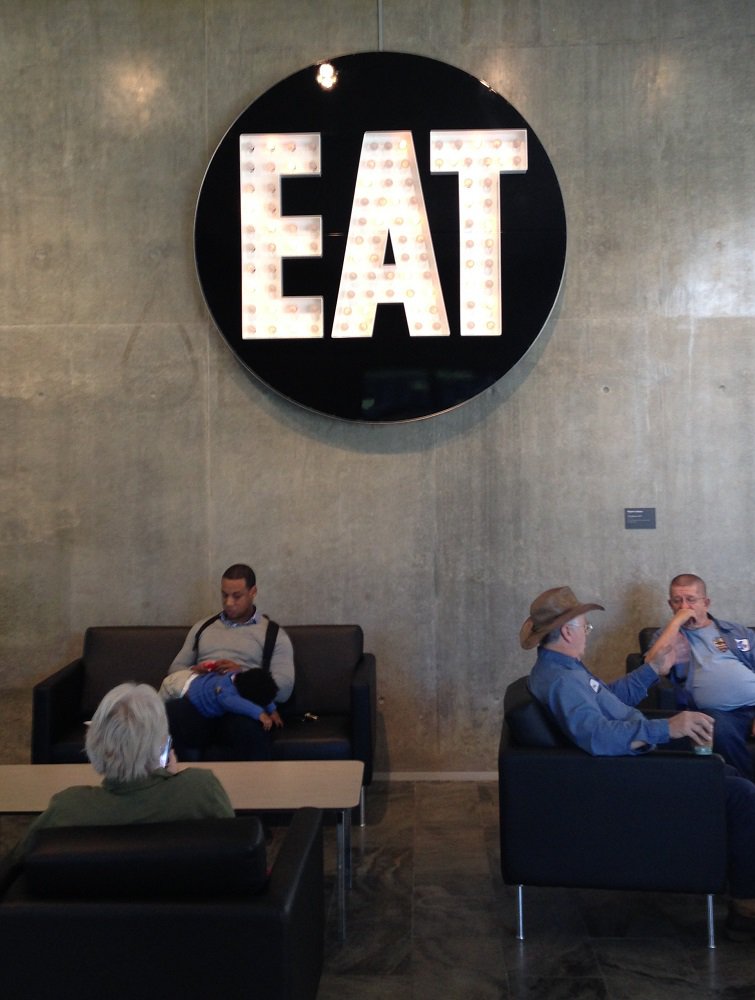 Visitors to Crystal Bridges’ South Lawn are familiar with one of the Museum’s most popular and photographed works: Robert Indiana’s LOVE sculpture. Fans of this work will be delighted to learn that Crystal Bridges has now added a second Indiana artwork to our permanent collection: The Electric EAT, now on view in the Museum’s main lobby near the Coffee Bar. 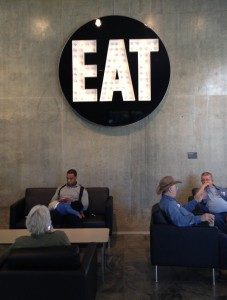 The work combines words, imagery, and popular culture reference in a vein similar to that of other Pop artists of the time, blurring the lines between art, everyday objects, advertising, and pop culture. “Like other artists in our collection working in the 60s—Warhol, Lichtenstein, and before them Johns and Rauschenberg—Indiana’s appropriating words and symbols from the common culture into the realm of high art,” said Crystal Bridges Curator Chad Alligood. “But this work is more than just words, it is using the actual materials of popular culture. It could, in fact, be a roadside sign for a workaday diner.” This illuminated work is both a nostalgic look backward at the classic diners of the 1930s and 40s as well as a work of Pop Art from the heart of the movement in the 1960s.  The letters E-A-T, set in a steel circle like an old-fashioned diner sign, are each filled with white bulbs. The work lights up in a series, illuminating each letter in turn and then entering a brief period during which the bulbs light randomly, making the work appear to twinkle like a marquee. 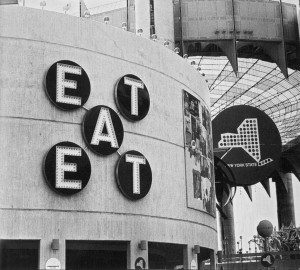 An earlier version of Robert Indiana’s “Electric Eat” on view at the 1964 World’s Fair.

As a matter of fact, when a version of this work was exhibited on the side of a building for the 1964 World’s Fair in New York, it had to be taken down within 24 hours because so many people had mistaken it for an actual restaurant sign—perhaps the ultimate affirmation for a work of Pop art. Indiana claimed that all of his work was autobiographical in one way or another. The Electric EAT was inspired by the series of roadside diners operated by the artist’s mother during the Depression,  to support her family. Indiana also claimed that the last word his mother said to him before she died was “eat.” The Electric EAT, with its busy, flashing bulbs, has a very different feel from the solid, immovable steel of the LOVE sculpture. But Alligood suggests that bringing the two works together can offer a new realm of meaning for LOVE. “When you consider LOVE alongside The Electric EAT, suddenly LOVE feels like an imperative,” he explained. “The EAT sign is telling you to eat, and it does that in a series of pulsing lights. And LOVE, as opposed to being a passive noun that just sort of exists in the world, instead it could be a kind of imperative: YOU love. The missing subject there is YOU. It becomes a kind of activity. It’s a verb and not a noun. I really like that sort of point/counterpoint of The Electric EAT and LOVE, it forced me to think about the love sculpture in a different way.” Come in to the Museum soon and let us know if you LOVE Robert Indiana’s The Electric EAT.