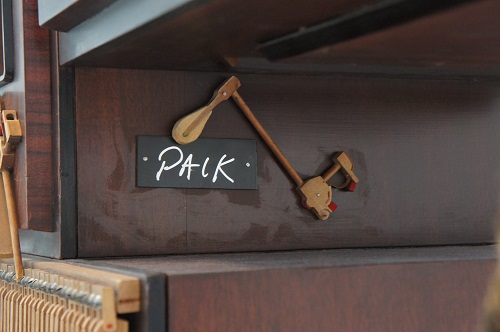 Paik’s robot sculpture carries a basket with books, CDs, wood mushrooms, and chessmen. The chess figures very likely refer to Cage’s 1944 composition, Chess Pieces, which he designed as a chessboard painting with musical score fragments in each square. Cage created the black and white ink and gouache painting for the chess-themed exhibition at the Julian Levy Gallery organized by Max Ernst and Marcel Duchamp in 1944. The mushrooms hint at John Cage as naturalist—a lesser-known side of his life. He was fascinated by mushrooms: he not only collected them but also published an artist mushroom book and revived the New York Mycological Society in the 1960s. The Robot’s basket also contains publications connected to Cage’s life, work, and beliefs, including books on Zen Buddhism and his CDs 16 Dances and In a Landscape (1995). 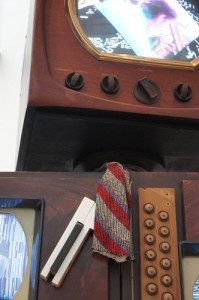 A closer look reveals a cut tie around the Robot’s neck, which refers to a joint concert by Cage and Paik in artist Mary Baumeister’s Cologne studio in 1960: during the Etude for Piano, Paik cut off Cage’s tie and washed the composer’s and pianist’s hair with shampoo or shaving cream.[2] Since Paik had been living and working in the Cologne area for two years, it is very likely that the cutting of the tie was inspired by a carnival custom from the Rhineland: on Weiberfastnacht (also known as Fat Thursday in other regions) women cut off men’s ties, which are considered a symbol of men’s status in society. The local audience certainly would have made this connection. Furthermore, Paik and other artists of the Fluxus movement supported feminist ideas.

This interesting lifelong friendship between Paik and Cage lasted from their first visit in 1958 to Cage’s death in 1992.  Their relationship was fruitful in many ways: the Easterner Paik was influenced by Cage’s work and Western philosophy (Hegel, Heidegger), and Cage admired the younger artist’s work and intellect, and was inspired by Asian religion and Oriental philosophy. Many of Paik’s works are linked to Cage, including: Hommage à John Cage (1959), the score Gala Music for John Cage’s 50th Birthday (1962), the videotape A tribute to John Cage (1973), the sound piece Empty Telephones (1987),  the 1990 video sculpture Cage from Family of Robots ,  Cage in Cage (1993), and Crystal Bridges’ John Cage Robot II (1995). Paik’s art influenced generations of artists, who worked with video and other time-based media such as Bill Viola, Christian Marclay.

Stay tuned for the upcoming State of the Art exhibition, in which viewers will see some of the ways contemporary artists continue Paik’s legacy, exploring cconnections between sound, photography, video, film, and performance.

[1] Cage explained in an interview that the sound experience he prefers is the experience of silence. John Cage in: What John Cage’s silent symphony really means, interview with BBC News,  https://www.youtube.com/watch?v=pcHnL7aS64Y, accessed 7/17/2014. [2] http://www.medienkunstnetz.de/works/etude-for-piano/ accessed 07/17/14.