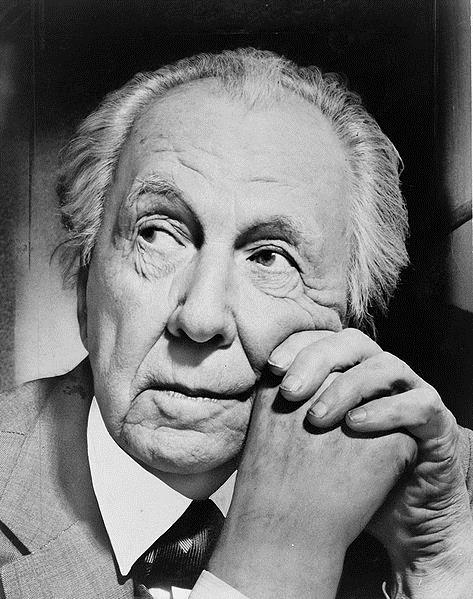 Today’s post was prepared by Dylan Turk, a curatorial assistant here at Crystal Bridges. Lately he has been working with our interpretation team to prepare information panels for Frank Lloyd Wright’s Bachman-Wilson House. These panels will be installed in the pavilion that will serve as an entryway for the home and its grounds when it opens later this year. In honor of Wright’s 148th birthday today, Dylan ransacks his copious notes to bring you words of wisdom from The Man Himself. –LD 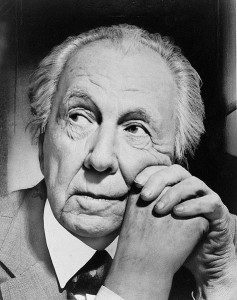 Over the past few months, I have been living in a world surrounded by Frank Lloyd Wright. My desk is stacked with books written about this man, one of the most prolific and renowned American architects. As I try to absorbed as much about who he was as I can, I feel no closer to understanding the origin of his genius. I have read anxious letters written by clients to Wright who, if they were lucky enough to receive a reply, received uninterested responses from the great architect. I have read the books and the writing of the man I have come to admire deeply. In the many books written about the personal tragedies and decisions that dominated the gossip columns during his life, I have come to realize that architecture stabilized him.

I don’t know who Wright was as a person, as most stories I read are one-sided and could be misunderstood. Somewhere along the line, Wright embodied the ego of a prophet. I think he realized that unwavering confidence was the only way his architecture would be respected and seen as ahead of its time. Through my research and understanding of his oeuvre, I know one thing for sure: his work has extraordinary influence on architecture across the world. As described by world-renowned architect Mies van der Rohe: “The dynamic impulse emanating from his work invigorated a whole generation.  His influence was strongly felt even when it was not actually visible.”

In celebration of Frank Lloyd Wright’s 148th birthday, the man who always had an opinion will speak for himself:

Building becomes architecture only when the mind of man consciously takes it and tries with all his resources to make it beautiful, to put concordance, sympathy with nature, and all that into it. Then you have architecture.     ―“In the Cause of Architecture” 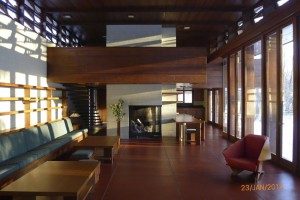 Interior of the Bachman-Wilson House prior to deconstruction.

As society progressed into the twentieth century, the “International Style”—a style identified by clean, crisp lines and white, manufactured spaces punctuated by primary colors—expressed the principles of the Modern movement. The primary goal of the International Style was to remove any local context from a building. Architecture should respond to history while remaining unbound from nostalgia. Frank Lloyd Wright, however, rejected this idea of exclusion of context and location from architecture, instead embracing a structure’s site as fundamental to building design. In 1958, following a speech at the University of Arkansas, Wright was questioned regarding his feelings about International Style.

JTC: Do you see a decline in contemporary architecture in the International Style? FLW: I don’t think it ever was a style or ever international—but such as the case may be, if you want to call it style, everyone is so darn sick of it, that I don’t think any of them want to see it anymore themselves. I see them now searching for something new, a little better, a little richer, a little warmer; something more in accord with the human spirit—all of them, and of course, the ones chiefly responsible for it, were very bad painters, who were trying to be architects…and they didn’t succeed. ―Excerpt from the Q&A at FLW’s speech at the University of Arkansas,  April 15, 1958 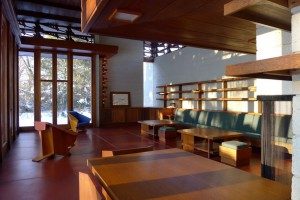 Wright’s architecture was desired because of the spirit that his buildings held―a spirit developed by the careful time and attention to detail Wright spent on every project, but also because he imbued his structures with Nature. For Wright, Nature wasn’t simply a window to another world, but the essence of life. In a 1957 interview with Mark Wallace he said, “I attend the greatest of all churches. I put a capital N on nature and call it my church.” Nature, in Wright’s mind, doesn’t stand independent from humankind, but is essential to all of us beings. 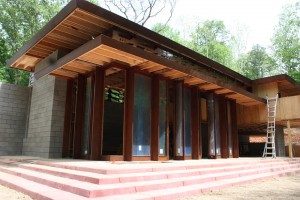 As the Bachman-Wilson House nears completion, it becomes ever clear how Wright incorporated nature within his built structures. In Wright’s words, he describes the boundaries of home and nature: “Where does the garden leave off and the house begin? Where the garden begins and the house leaves off.  Withal, this Usonian dwelling seems a thing loving the ground with a new sense of space, light, and freedom—to which our U.S.A is entitled.”

We have no longer an outside and an inside as two separate things. Now the outside may come inside and the inside may and does go outside. They are of each other. Form and function thus become one in design and execution if the nature of materials and method and purpose are all in unison.                ― Frank Lloyd Wright, from Frank Lloyd Wright, The Houses

Sun-acceptance in building means that dotted-lines and wall surfaces eagerly take the light and play with it and break it up and render it harmless or drink it in until sunlight blends the building into place with the creation around it.                                  ―“To Arizona” in Arizona Highways, 1940   (in Collected Writings)

The beauty of Wright’s writing is that his buildings validated all of his principles. Theodore Baird wrote Wright on February 25, 1941, to express his gratitude for the impact that living in a Wright-designed home had had on him.

“I never noticed before in all my life how the days lengthen and I catch glimpses of the sun on the Holyoke range which were there to be seen all the time if one only looked and if on lived in a house which looks as this one does.  Waking up is a joy.  There is a world around us, not within my own brainbox.  Even sitting with my back to south I am conscious of a direction, an opening out .  .  . We came to you in the first place knowing that you could design us such a house, but actually knowing the experience of living day by day, where the walls are not barriers, where there are satisfactions for the senses in just moving from one room to another, that is more wonderful than I ever hoped.”

To see a short video of the reconstruction of the Bachman-Wilson House at Crystal Bridges, Click here.

In honor of Wright’s birthday: Enter our Instagram contest for the chance to win an Architecture Gift Basket. Instagram a photo that you feel represents the relationship between architecture and nature using the hashtag #FLWBirthday. Don’t forget to tag @crystalbridgesmuseum in your post!