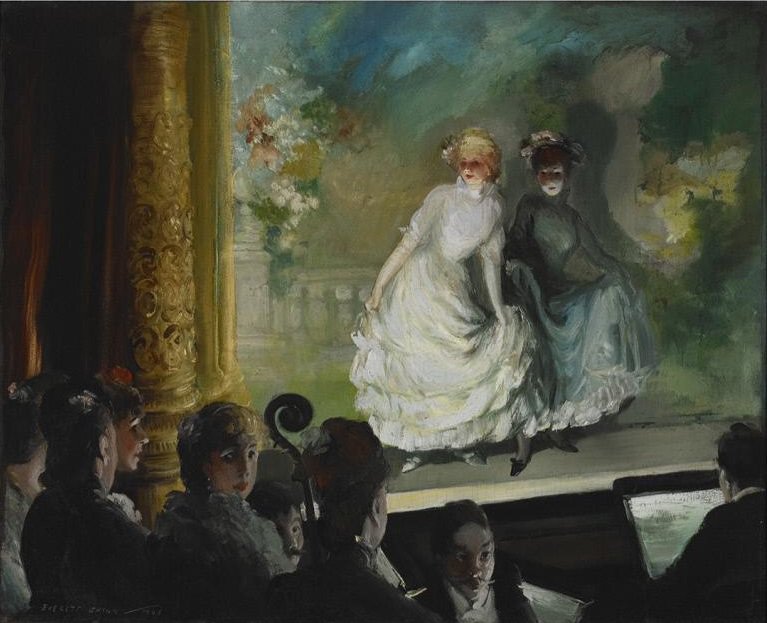 Today is the birthday of Everett Shinn (1876 – 1953), a member of the Ashcan School of painting spearheaded by Robert Henri. Shinn is best known for his paintings of theatres and New York street scenes.  He also was one of the few artists who worked largely in pastels. He began his career as an illustrator, working for a number of newspapers in Philadelphia and New York, and the later creating illustrations for popular magazines. His early career at the Philadelphia Press, where he started working in 1893, he referred to as “A school that trained memory and quick perception.” Press artists were required to take in and memorize details of events on the streets of New York and then render them quickly and accurately in clean black-and-white for reproduction.  Shinn prided himself on maintaining this ability all his life. In 1893 Shinn became a member of the “Charcoal Club,” a group of artists who were disappointed by the rigid standards of the Pennsylvania Academy and who instead gathered together to socialize, discuss, draw, and critique one another’s work.  Other members of the group included John Sloan, Edward Davis (the father of Stuart Davis), William Glackens, George Luks, and Robert Henri, who led the critiques.  Shinn would later credit Henri for inspiring him to become a true artist, writing: “It was Robert Henri who set me to painting seriously; without his inspiring friendship and guidance I probably might never have thought of it at all.” 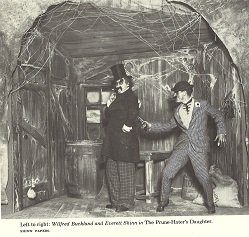 Wilfred Buckland and Everett Shinn in The Prune-Hater’s Daughter *

Henri’s home also served as a social hub, and the group often created and performed in “amateur theatricals” there. Shinn was a devotee of the theatre, which is reflected in his work.  While married to his first wife, he had a 55-seat theatre built in their home, for which he wrote, directed, performed in, and designed sets for a number of farcical plays with titles like Lucy Moore: or The Prune Hater’s Daughter and Hazel Weston: More Sinned Against than Usual. Some of these were later purchased from the artist and performed on the Vaudeville stage. 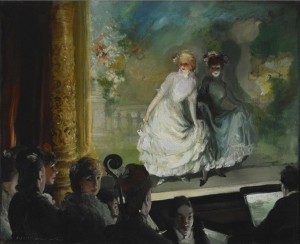 One of Shinn’s painting in Crystal Bridges’ collection, A French Music Hall, is a perfect example of his fascination with the theatre.  The work is painted from the point of view of the audience, and includes bits of the orchestra as well as proscenium and dancers on the stage. One of the most arresting things about the work is the woman in the audience who has turned her head to gaze directly at us, a slightly disapproving look on her face, as if the viewer is talking too loudly or otherwise disturbing her experience of the show. Shinn’s association with Henri also led him to become part of a collection of artists known as The Eight:  including Henri, Shinn, Sloan, Davies, Luks, and Glackens, along with Ernest Lawson, and Maurice Prendergast. They rejected the European-centric art of the early twentieth century. Shinn later wrote: “Art galleries of that time were more like funeral parlors wherein the cadavers were displayed in their sumptuous coffins.”  The Eight favored grittier works of more everyday subjects that they considered uniquely American.  The group exhibited their work together only one time:  in 1908 at William Macbeth’s gallery in New York, before becoming subsumed in the larger movement known as the Ashcan School. From all accounts, Shinn was a somewhat colorful and theatrical character, impeccably dressed like a dandy in bright plaids, and always eager to be at the center of attention. He was also something of a womanizer. The first of his four wives divorced him for committing three counts of adultery with “women unnamed,” and his other three marriages each lasted no more than 9 years. His marriages and subsequent divorces often made a splash in the press. He later wrote of his marriages in terms of circus acrobat who having “risked the precarious hazards of the slackwire of matrimony” falls again and again, though “fate had dipped the trapeze bar in a biting corrosive acid…snap… and as I fell I saw a cobweb substituted for the net…held at each end by two lawyers dressed as clowns.” 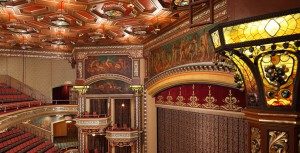 In 1899 Shinn met New York decorator Elsie de Wolfe who employed him to paint murals in a “rococo revival” style for her well-to-do clients. Through Elsie, the artist was introduced to David Belasco, impresario and owner of Belasco’s Stuyvesant Theatre on West 44th Street in New York, for whom he created no less than 18 murals. These are still in place today, and were restored in 2010.  Shinn also painted murals for the historic Oak Room at the Plaza Hotel. These too are still in existence, and will be back on view when the renovated Oak Room and Oak Bar reopen in the early months of 2016. Following his characteristic restless nature and fascination with theatre, in 1917 Shinn began working as the art director for Goldwyn Pictures, and later worked with a string of motion picture companies, including William Randolph Hearst’s Cosmopolitan Pictures. In 1918 the author Theodore Dreiser published a book titled The Genius, whose main character, Witla, was ostensibly based on Shinn. Shinn rejected this, claiming that while the artworks and studio in the book resembled his own, he was “in no way related to … the artist in Dreiser’s book,” and that the character was probably based on Dreiser himself. 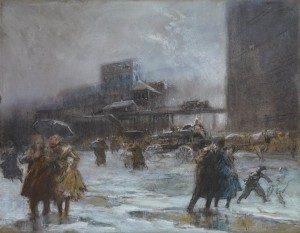 A committed realist, Shinn completely rejected European Modernism and refused to show his work in the famous New York Armory Show, which introduced American audiences to modern art in 1913. Late in his career, he was criticized for clinging to what was considered an outmoded style, and for the unapologetic commercial nature of his work.  Shinn painted what sold:  from murals of cherubs and highly coiffed ladies for the New York elite, to deftly sketched New York street scenes.  Today, however, we can appreciate Shinn’s works for their atmospheric qualities and loose, graceful characterization of an America long past. * Photos of Shinn are from Everett Shinn 1876-1953, by Edith DeShazo, available in the Crystal Bridges Library.