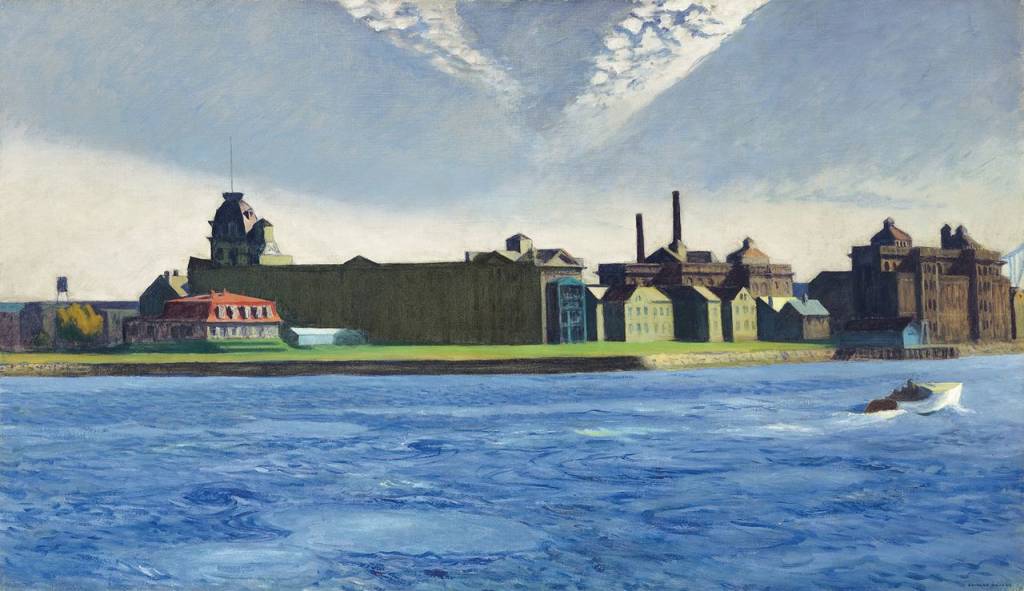 Crystal Bridges Museum of American Art will soon debut a new acquisition of a major work by American Modernist painter Edward Hopper (1882–1967).  The work, titled Blackwell’s Island, offers a view of what is now known as Roosevelt Island, located off Manhattan in the East River. The work will be exhibited in the museum’s Early Twentieth-Century Art Gallery, among works by other modern American masters such as Georgia O’Keeffe, Charles Sheeler and George Bellows. Painted in 1928, Blackwell’s Island is among the largest of Hopper’s oil paintings, measuring 34-1/2 inches by 59-1/2 inches. 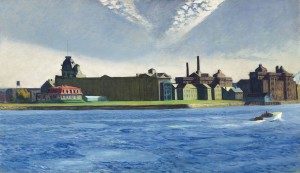 The painting features a wide expanse of blue sky above and turbulent cobalt blue water below, bisected by a shadowed, brooding skyline of buildings along the island’s waterfront. In classic Hopper style, there is a sense of distance between the viewer and the remote, impersonal architectural subject, and evidence of humanity is almost non-existent except for a single dark figure that pilots a power boat cruising away from the viewer toward the right-hand edge of the frame.

“This is a most ambitious composition for Hopper,” explained Crystal Bridges President Don Bacigalupi. “He painted this work at the height of his powers and it exemplifies some of the best of Hopper’s style: a complex architectural composition with a full range of light and shadow, few people and the drama of the past colliding with the present in the form of historic architecture meeting modern.”

Hopper is known for creating a sense of loneliness or isolation in his work, and he was particularly interested in capturing the older, vanishing architecture of the city. Water was also a major compositional element in Hopper’s work, and Blackwell’s Island brings all of these elements together in a large and immersive painting. The acquisition fills an important place in the Crystal Bridges collection of post-World War I artwork.

“We have a very strong collection of American art from the 1930s,” Bacigalupi said. “Hopper is among the most highly regarded artists of his generation. We have several of Hopper’s works on paper, but those are light sensitive and can’t be on view year-round. It is a pleasure to add this major oil painting to our collection, so that it can be exhibited on a long-term basis. Hopper is one of those must-see artists, and I am sure our guests will be thrilled to be able to view this work in person.”   Blackwell’s Island, which was previously owned by a private collector, has been exhibited at The Museum of Modern Art; The Whitney Museum of American Art; the Museum of Fine Arts, Boston; Pittsburgh’s Carnegie Institute; and the Art Institute of Chicago. More recently, the painting was included in the first major retrospective of the artist’s work at the Grand Palais in Paris from October 2012 through February 2013.