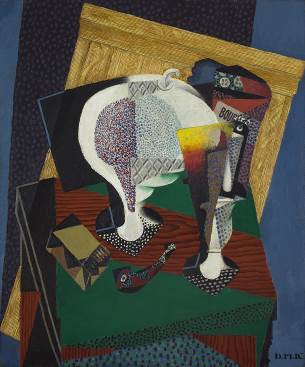 Time-traveling sculpture Further research on one of the sculptures in the Alfred Stieglitz Collection revealed that the work’s recorded date of 1930 was incorrect: it turned out the artwork was exhibited in the groundbreaking Armory Show in New York in 1913. Chula was listed in the Armory Show’s inventory (cat. No. 623) as created by artist Manolo (Manuel Martinez Hugué) in bronze in 1910. The work’s owner, art dealer Henry Kahnweiler, sold it for $67.50 to Alfred Stieglitz on February 20, 1913.[1] Kahnweiler very likely issued the cast for the artist Manuel Martinez Hugué (the bottom of the sculpture shows the initials K H).[2] 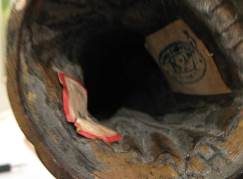 In 1910, Manolo moved, with the financial support of his art dealer Kahnweiler, to the village of Céret near the Spanish border, where he created works that reflected Catalonian influence: a style that rejected the abstraction of avant-garde movements and instead focused on popular realist themes emphasizing clarity and simplicity. Kahnweiler explained that  Manolo’s works from that time were “created from his surroundings, the men and women, oxen and horses of the Pyrennes [sic]” [3]

East Meets West Another mystery in the Alfred Stieglitz Collection involves the iconography of Diego Rivera’s still life Le sucrier et les bougies (Sugar Bowl and Candles). Rivera was one of most well-known Mexican artists of the twentieth century, and the leader of the Mexican Mural Movement. His Cubist paintings, completed during a stay in Paris, are less well-known, but are important as the artist was beginning to explore the issues of nationalism and social politics during this time—themes that would later become prominent in his work in Mexico. The creation of these paintings also coincided with the Mexican Revolution and World War I.

In this still life, Rivera is working with many images that relate to his homeland and its relationship with Europe:  the pipe refers to the ancient tradition of tobacco cultivation in Mexico and its subsequent introduction to European culture.  (Some of the Indigenous cultivation sites in Mexico date back to 1400-1000 B.C. Tobacco and pipe smoking was introduced to Europe from the Americas in the 16th century.)  The sugar bowl and candles may refer to the Mexican tradition of placing sugar skulls on the altar during the celebration of the Dia de los Muertos.  His “keepsakes” from Mexico are infused with nostalgia and serve as a reference to home from afar. 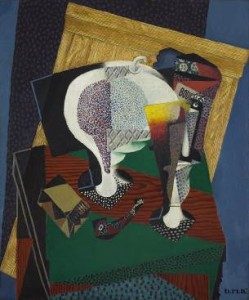 However, these allusions to his native land are often combined with imagery that refers to Rivera’s new European homes in Spain and France, such as Parisian café interiors. The large sugar bowl in this painting is very likely an absinthe sugar holder. Even though absinthe was banned in most European countries in 1915, the year Rivera painted Le sucrier et les bougies, the potent alcoholic beverage was famously consumed and depicted by artists such as Henri de Toulouse-Lautrec, Édouard Manet, and Picasso. The drink symbolized the bohemian culture of Paris that came to an end with the beginning of WWI. It has often been portrayed as a dangerously addictive psychoactive drug. Absinthe was prepared by pouring water over sugar cubes on a slotted spoon which was placed over the glass containing the green liquid.

Inspired by Picasso and Braque, whose works he saw in Paris, Rivera adopted their fragmentation of form, use of multiple perspective points, and flat picture plane. Rivera’s own Cubism is characterized by brighter colors and contrasting, textured surfaces such as the painted wood grain juxtaposed with areas of small dots in a Pointillist style. Le sucrier et les bougies is one of three Rivera paintings acquired by Alfred Stieglitz.

[1] http://armory.nyhistory.org/search/Chula , accessed August 15, 2013
[2] Henry Kahnweiler worked with the Florentin Godard foundry in Malakoff, Paris at that time (foundry mark “Godard fondeur”, it is unlikely that these initials are foundry marks.
[3] Lisa Mintz Messinger, Stieglitz and His Artists: Matisse to O’Keeffe, Metropolitan Museum, p 30